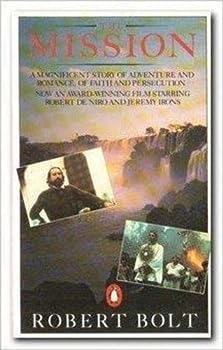 In order to come to terms with his violent past, soldier-of-fortune Rodrigo Mendoza joins forces with a priest, Father Gabriel, leader of a Jesuit mission deep in the South American jungle, to battle... This description may be from another edition of this product.

Published by Thriftbooks.com User , 18 years ago
If you've seen the excellent Roland Joffe film with Robert de Niro and Jeremy Irons, you'll understand the theme of guilt and redemption that runs like a wound through this book, but you won't be prepared for the detail of the book. It tells the story of Mendoza, a fiercely protective elder brother, strong and disciplined worker, and experienced rapist/murderer--all roles he squirms away from, but has to acknowledge. When he kills his brother in a moment of passion he tries (horribly, painfully) to gain redemption through the Jesuit order. Father Gabriel, his spiritual protector and friend, also has a struggle, not as obvious but no less difficult.Read it well and then see the film, which is not an adaptation of this book but a re-working of the story (the film is not really about Mendoza or Gabriel--it's a commentary on regret through the eyes of a minor character in the book, Altamirano). Both are challenging and well worth the effort.
Copyright © 2022 Thriftbooks.com Terms of Use | Privacy Policy | Do Not Sell My Personal Information | Accessibility Statement
ThriftBooks® and the ThriftBooks® logo are registered trademarks of Thrift Books Global, LLC