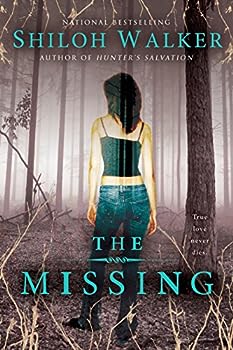 The Missing (The FBI Psychics)

(Book #1 in the The FBI Psychics Series)

From the national bestselling author whose sexy stories ?you will not soon forget?( Romance Review ) comes a brand-new, sinfully sexy romantic suspense novel. Her psychic gift drove away the man she... This description may be from another edition of this product.

Published by Thriftbooks.com User , 13 years ago
Taige Branch has a gift or a curse, depending on how you look at it. Her psychic visions have only ever given her bad nights and made her the object of villification and frequent beatings by her sanctimonious uncle. But it is when the boy she loves, blames her for not preventing his mother's death and walks out of her life that is the hardest blow of all. Twelve years later, Cullen Morgan's back, widowed, wiser and as devastatingly attractive as ever. He needs Taige's help to find his little girl who's been kidnapped. As the two race against time to find little Jilly, the attraction that never died bursts back to potent flames. Will Cullen be able to convince Taige that he's never stopped loving her? Dare Taige trust her heart to Cullen again? Ms. Shiloh Walker is in fine form here. She leaves no hearts untouched as we follow Taige and Cullen's relationship from heady teenage passion to raw heartbreak to full-blown love and sweet healing. Filled with her trademark poignant emotions, searing erotic heat and spine-tingling suspense, The Missing has a little something for everyone.

Published by Thriftbooks.com User , 13 years ago
Taige Branch was blessed, or maybe cursed, with the special gift of vision. She certainly doesn't feel special though and has had more than her fair share of pain - emotional and physical. Losing both parents and being sent to live with her fire and brimstone preacher of an uncle, she was constantly berated and regularly beaten because of the "evil" that supposedly had taken residence in her young body. Despite all of this, Taige uses her gift to the best of her ability, saving more than one person from certain death and then suffering the physically ravaging consequences in private after. When a wealthy boy's family buys a vacation home in the Alabama gulf where Taige lives, the teens are instantly attracted and it isn't long before he witnesses her gift first-hand. Unfortunately, she is unable to predict Cullen's mother's violent death, only to be blamed by him and cast aside. Taige and Cullen may have been separated for several years but they never forgot each other. When Cullen's young daughter is kidnapped, Taige is the first person the single father turns to for help. Now officially working with the FBI to find missing children, Taige's abilities are maximized to the fullest. Cullen's daughter is found, but in doing so, Taige discovers and connects with a multitude of other murdered children who have been missing for decades. Cullen soon realizes that his daughter has the same gift as Taige, as did the children whose remains were recently discovered. He knows that in order for his daughter to ever have true peace in her life he will have to work with Taige in finding the man whose evil is responsible for the sheer hell these children endured. They won't have to look far though because he has Taige in his sights and he's bent on total destruction. Shiloh Walker has outdone herself with this book. It's dark, sensual and suspenseful, but most of all it's chock full of excellently written emotion and turmoil. Taige and Cullen are damaged souls, and while their backgrounds couldn't have been more different, their hearts and their love for each other are very much the same. They both regret what could have been for their relationship all those years ago, but celebrate what the future may hold for them. I personally feel that this just might be Shiloh Walker's best work to date and I highly recommend it.

Suspense and Romance in One...

Published by Thriftbooks.com User , 13 years ago
Years ago Taige Branch and Cullen Morgan fell in love while Cullen's family was vacationing in Gulf Shores, Alabama. He is the only one, besides her late mother's friend Rose and her son, that she can share her abilities freely with...especially her dreams of a girl in need of her help. But their love is ripped apart when Cullen's mother is murdered and Cullen blames Taige for not being able to save her in time. Tweleve years later Cullen is the widowed father of Jillian. He has never forgotten Taige and he closely follows her career of finding lost children. When Jillian goes missing Cullen turns to the one woman who can find her, Taige. Because of her past, Taige lives her life for others finding lost children for the FBI. Chilren with supposed "special abilities" are turning up murdered and when Cullen asks for her help she cannot deny the only man she has ever loved, especially since the girl in her dreams so long ago were none other than Cullen's daughter Jillian! I can't help but feel for the characters. Taige because she is such a haunted individual. She has lost everyone she has ever loved and because of what happened with Cullen's mother she puts herself in harms way to save others. Cullen because he has never stopped loving Taige and, even though he knows Taige has every right to refuse, goes to her because she is the only one who can help save his daughter. Cullen faces some tough challenges in trying to get Taige to trust him with her heart again and I couldn't help but pull for him. Even though they have never stopped loving each other they both have to work through their past and face down a serial killer to get their happily ever after. I am a big fan of Shiloh Walker and THE MISSING is no exception. I especially like how she begins the story in 1992. This allowed me to not only get a good background on Taige but also to see how the relationship between Taige and Cullen developed. If you like Shiloh Walker or you like some suspense with your romance you won't be disappointed.

Published by Thriftbooks.com User , 13 years ago
In Gulf Shores, Alabama, psychic Taige Branch uses her skill to find missing children. She had visions of a little girl in trouble, but has no idea who she is or what to do to rescue her. FBI agent widower Cullen Morgan is desperate as his beloved daughter Jilly has been abducted. Scornful of Taige's skill as she failed to warn him that a psychopath would kill his mother when they were lovers eight years ago, he goes to her to plead for her help. Taige is stunned to see Cullen, but more shocked when he shows her his daughter's picture; she is the girl haunting her dreams. As a team, they may be able to save his child from a maniacal predator. This is a great romantic suspense that grips the audience from the moment that Cullen begs Taige to find Jilly. The story line is action-packed especially when the two lead protagonists are on the rescue search. Sub-genre fans will feel the pain Cullen suffers as a single dad worried about his offspring while appreciating the courageous Taige who still loves the man who dumped her for failing him. Harriet Klausner

Published by Thriftbooks.com User , 13 years ago
Years ago, Taige and Cullen were deeply in love. Then fate stepped in, dividing them when no one else could. Cullen blamed Taige for not being able to prevent his mother's death, and pushed her away. Since then, Taige has put her psychic ability to good use, using it to help other people. Sometimes she prevents a tragedy, sometimes she can only provide closure and justice. Now Cullen's young daughter is missing and only Taige can help him find her. Will she be able to save the girl before it is too late? If you have never read a book by Shiloh Walker, THE MISSING is a great place to start. In this book, Ms. Walker spins a riveting tale of suspense and romance, topped off with a bit of the paranormal. My heart absolutely went out to Taige. This poor woman has been through so much in her life but she perseveres through it all. She lives her life for others, even though her personal life is lonely and bereft of love. Or so she thinks... The one thing she does have is some pretty lively and realistic dreams of her ex-lover, Cullen. She has never been able to forget him, despite the things he said to her at the end. Really, she blames herself for his mother's death as much as he did, even though she knows her gift can't be directed that way. Her visions come to her without rhyme or reason, and she can never control who she can save. Those dreams kept her feelings about Cullen alive and well, so she is more than primed when he walks back into her life. Interestingly enough, he seems to feel the same way about her. Cullen may have made some big mistakes, but it is easy to forgive him when it is obvious how much he really cares for both Taige and his daughter. He is as contrite as can be about the way he treated Taige in the past and will do anything to make up for it and win her love back. The romantic hurdles are the easy ones here. The real threat comes in the form of the serial killer who now has his hands on Cullen's daughter and seems to be targeting Taige now as well. The suspense is high, and the author peppers the story with enough clues to the murderer's identity to keep readers on pins and needles to the very end of the story. If you like your romance novels emotionally charged and filled with suspense, you will not want to skip THE MISSING by Shiloh Walker! **Courtesy of Wild on Books**
Trustpilot
Copyright © 2022 Thriftbooks.com Terms of Use | Privacy Policy | Do Not Sell My Personal Information | Accessibility Statement
ThriftBooks® and the ThriftBooks® logo are registered trademarks of Thrift Books Global, LLC