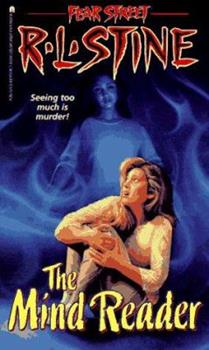 A teenager's strange visions lead her to a secret grave in the Fear Street woods--and on a terrifying hunt for a killer. A bony hand beckons from a shallow grave, but only Ellie can see the skeletal hand. Ellie's visions of past secrets and future horrors lead her to the body of a girl killed two years before . . . and possibly to the murderer.

Published by Thriftbooks.com User , 13 years ago
Ellie Anderson is the main character. Her best friend is Sarah Wilkins. I like these books mostly for the fun, cozy relationships and the fun times the teens have. Ellie has a job after school at the library, shelving books. She meets an interesting guy named Brian. A young girl was murdered two years ago. Ellie has visions pertaining to this girl. She is determined to solved the mystery of the murder with her visions. Part of the mystery is what does Brian, if anything, have to do with the murder? And what about Brett? These questions are answered in this book.

this is a good book

Published by Thriftbooks.com User , 16 years ago
R.L.Stine G.Atalla Period6 This book is called The Mind Reader. This book is about a girl named Ellie Anderson, who has a best friend named Sarah Wilkins. These two girls go to Shadyside High School. Ellie also had a boyfriend named Brett. Ellie was informed that a young girl her age, was murdered two years ago. Ellie was devastated by the horrible news. Ellie started having these visions. These visions were about the girl who was murdered. These visions lead her to the body of the murdered girl. The part that I disliked the most was the parts at the end were it ended with a kiss not a murder cast. Brett, also know as the mind reader, could read the minds of people. A quote form the book that scared me the most, was when Ellie said to Brett, "My mother used to have visions. I guess she passed that ability to me." That scared me the most because in the beginning I thought that Ellie didn't know about her ability, but know she thinks it was from her mother's genes. Another quote from this book that caught my attention was when Brett said to Ellie, "I'm kind of a mind reader." This caught my attention because this was kind of funny to me because Brett was having so called visions, about a girl was needed his help. Brett thought that it was going to help find out who was the murder of the young teenage girl. My favorite part of the book was when Ellie had the visions of the murdered girl. The way Ellie was sweating when she was having the visions. This told me about the whole story. It was really scary to hear and picture what kind of visions she was having. Another favorite part that I had was when Brett leaned over to kiss Ellie because of how much she was stressed out and scared from all the creepy visions that she was seeing. Those are the most parts in the book that really caught my attention and made me interested.

Ellie's visions have led her to a dangerous adventure...

Published by Thriftbooks.com User , 18 years ago
Ellie Anderson has visions of things that happened in the past and things that will happen in the future. Ellie thought her visions were really cool, until they meddled with her love life. Ellie promises herself that her new life in Shadyside will not be ruined by visions. But Ellie's promise is broken when her visions lead her to a dead body in the Fear Street Woods. Now she must find the murderer before he finds her first.When I finished reading this book, all I could say was 'Wow.' It was a fantastic Fear Street book! It had several different genres. Horror, mystery, suspense, romance, and adveenture. Let's not forget the surprise ending. That was shocking. Out of all of the main characters in the book, it was that guy. You'll never be able to guess it.Read this book!

Published by Thriftbooks.com User , 20 years ago
I think the mind reader is a real good book because it keeps you geussing on who did it and how did they do that. What I like about the book the most is that the main character. Ellie deals with stuff that every day people whould do just not finding the bodys and have visons but some people do have visons. I could read this book 1,000 times and I bet if you read it once you would read it again. so if I were you I would read it.

Published by Thriftbooks.com User , 22 years ago
I THINK THAT THIS WAAS THE COOLEST BOOK I EVER READ . THE SUSPENSE AND THE ACTION WAS JUST TERRIFIC .I THINK R.L STINE IS A VERY TALENTED AND EXPRESSES EVERYTHING TERRIFIC
Trustpilot
Copyright © 2022 Thriftbooks.com Terms of Use | Privacy Policy | Do Not Sell or Share My Personal Information | Accessibility Statement
ThriftBooks® and the ThriftBooks® logo are registered trademarks of Thrift Books Global, LLC