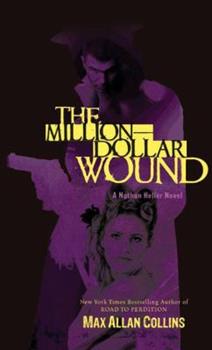 (Book #3 in the Nathan Heller Series)

Chicago P.I. Nate Heller returns home from duty in Guadalcanal a decorated, damaged, and dangerous hero--and drops directly from one war into another: the gangland coup to topple Frank Nitti as he tries to strong-arm the Hollywood unions.

Published by Thriftbooks.com User , 16 years ago
Max Allan Collins sends his historical detective Nathan Heller off to war in The Million-Dollar Wound, the third in the series after True Crime. A little male pride, some misplaced patriotism, and a few drinks too many land Heller, too old for the draft, in the Marine enlistment office in 1942, right alongside best friend and ex-boxer Barney Ross. Far too soon after, they find themselved smack dab in the middle of Guadalcanal Island, surrounded by "Japs" and fighting death in both its projectile and contagious forms. As especially bad case of malaria finds an amnesiac Heller back in the States with a fuzzy memory but a thriving investigation practice, and a request to testify against Frank Nitti, now in control of the territory left vacant by Al Capone's prison sentence. The story quickly flashes back to 1939. Those used to the linear narratives of the first two novels in the series (True Detective and True Crime), and their relative chronological proximity to each other, may be thrown by The Million-Dollar Wound, which takes place nine, then six, then ten years after the events in True Crime. The Million-Dollar Wound was Max Allan Collins' most complex novel, both emotionally and narratively, up to that point. The weight of the combat experience weighs heavily on Heller's mind throughout the remainder of the novel, especially the bad dreams he has involving a fellow Marine's death by "friendly fire." Did Heller fire the fatal shot? He can't remember. This lends a gravity to this third entry that only enhances the reading, offering a deeper sense of character through Heller's reaction to the truth. I understand that the war effects Heller throughout the series, but only time will tell. (Note: The title refers to a war wound that gets a soldier sent home, but doesn't kill him.)

Published by Thriftbooks.com User , 18 years ago
This is one of the jewels in Collins' long-running series THE MEMOIRS OF NATHAN HELLER. It's distinguished by the titular private eye's combat trauma in the U.S. Marines during the bloody 1942 battle for Guadalcanal. Invalided home on a section 8 discharge for mental illness, Heller struggles to recover his own identity at the same time he unravels a series of interlocking mysteries in Hollywood and Chicago. Historical highlights include the mob-related murder of Edward O'Hare, father of the Navy hero for whom Chicago's airport is named, and one of Collins' certified revisionist theories about Outfit godfather Frank Nitti, the man who succeeded Capone. The book features a smashing balance of action, historical research, and psychological insight, transcending the private eye genre. It's on my all-time Top 10 list of historical novels, and I'm overjoyed it's back in print. See also NEON MIRAGE and STOLEN AWAY.

Published by Thriftbooks.com User , 22 years ago
The last in Collin's Nitti Trilogy is better than it's predecessor (True Crime), but not as strong as the first in the series (True Detective). Still, a fine novel and a fitting end to the cycle as Nate Heller's relationship with the famed gangster comes to an end.The next in the series, The Neon Mirage, begins a new stage in the charater's existence.
Trustpilot
Copyright © 2022 Thriftbooks.com Terms of Use | Privacy Policy | Do Not Sell My Personal Information | Accessibility Statement
ThriftBooks® and the ThriftBooks® logo are registered trademarks of Thrift Books Global, LLC