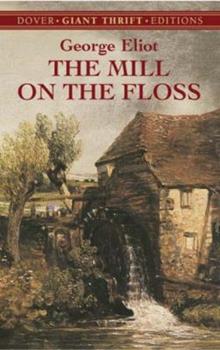 The Mill on the Floss (Dover Thrift Editions)

Based closely on the author's own life, Maggie's story explores the conflicts of love and loyalty and the friction between desire and moral responsibility. An accurate, evocative depiction of English rural life, this compelling narrative features a vivid and realistic cast, headed by one of 19th-century literature's most appealing characters.

Mill on the Floss

Published by Thriftbooks.com User , 12 years ago
The book was heavily marked--had been used by a college undergraduate. As a professor, I found the markings amusing. Service was excellent and the book was in very good shape.

A work of great beauty, depth & an outstanding literary classic!

Published by Thriftbooks.com User , 16 years ago
Powerful and moving, "The Mill on the Floss" is considered to be George Eliot's most autobiographical novel. Along with "Middlemarch" it is my favorite. Set in early 19th century England - St. Ogg's, Lincolnshire to be exact - this is the tale of gifted, free-spirited Maggie Tulliver and her selfish, spoiled brother, Tom, who were born and raised at Dorlcote Mill on the River Floss. Eliot's portrayal of sibling relationships is terribly poignant and plays a major part in the novel, as does the longstanding rivalry between two local families - the Tullivers and the Wakems. From earliest childhood Maggie worships her brother Tom, and longs to win his approval, and that of her parents. However, her fierce intelligence and strong streak of independence bring her into constant conflict with her family. She finds, in literature, the kindness and love she longs for in life. "...everybody in the world seemed so hard and unkind to Maggie: there was no indulgence, no fondness, such as she imagined when she fashioned the world afresh in her own thoughts. In books there were people who were always agreeable or tender, and delighted to do things that made one happy, and who did not show their kindness by finding fault. The world outside the books was not a happy one Maggie felt. If life had no love in it, what else was there for Maggie?" Her nature, complex, passionate, sensuous, noble, intellectualized, and spiritualized, is of great importance to this novel, as is the pathos of her relationship with Tom. Maggie's early years are brilliantly and unsentimentally portrayed from a child's perspective. The author structures a sequence of childhood's phases, which might appear, at first, to be random vignettes, but constitute an excellent psychological basis on which to build a character and motivation. Eliot once stated, "my stories always grow out of my psychological conception of the dramatis personae." Thus, the author chronicles Maggie's life as she grows from a precocious little girl to a strikingly attractive young woman, tall with full lips, and a "crown" of jet black hair. Her lack of social pretension makes her even more charming and likeable. As she matures, her conflicts with her brother, her family, even with her community, increase significantly. She, herself, feels torn between what is considered her "moral responsibility" and her search for self-fulfillment. Ultimately, she demonstrates honor and courage in the face of the disapproval of a narrow, tradition-bound society. Parallel to, and intertwined with Maggie's story, is that of families Tullivur and Wakem. After Tullivur loses his mill and social respectability through bankruptcy, (a loss precipitated by a rash lawsuit he undertook), Wakem purchases it all. Mr. Tullivur agrees to stay on as manager. At first he seems resigned to his misfortune. However, within the space of a few pages he is swearing vengeance on the new owner and cursing him. He actually summons Tom to inscribe his curse o

Published by Thriftbooks.com User , 17 years ago
Allowing myself the use of a preciously rare adjective, I will call George Eliot's "The Mill on the Floss" a Wordsworthian novel in the sense that it is a deeply personal work to the point of being semi-autobiographical, adores nature with imaginative poeticality, and shows a great affection towards a sibling. Like all of Eliot's major novels, it is a masterpiece of form, developing from a pastoral about childhood into a brooding love story concerning five young people who are motivated by a complex web of emotions involving pity, loyalty, and spite. The two protagonists are Maggie Tulliver and her older brother Tom, whose father owns Dorlcote Mill on the river Floss near a town called St. Ogg's. Maggie, Eliot's presumable alter ego, is a normal little girl in most respects but extremely bright and quite mischievous, cutting off her hair to rebel against her remonstrative mother and nattering aunts and uncles and pushing her pretty cousin Lucy Deane into a puddle of mud in a fit of jealousy. Tom, on the other hand, is a pragmatist rather than a Fury; he lives strictly according to the principles set forth by their father and believes people should be held accountable for their actions. While Maggie enriches her mind through her own reading, her father, who believes girls have no need for education, sends the much less bookish Tom to a prosaic tutor named Stelling to fathom the mysteries of Virgil and Euclid. While visiting Tom at Stelling's, Maggie meets the only other person in the novel whose intellect matches her own--Philip Wakem, a sensitively artistic but deformed boy whose father, a lawyer, is the sworn enemy of Mr. Tulliver. Philip, painfully aware of his unattractiveness, falls in love with Maggie because she is the only girl who has ever shown any interest in him; but Tom, loyal to his father and mindful of the harm Mr. Wakem has done to their family, warns her not to socialize with him. The trysts of Philip and Maggie--the hunchback and the tall, gawky girl--may seem like a grotesque parody of Romeo and Juliet, but there is touching sincerity and truthfulness in their scenes together. Years pass, and a new man enters the story--Stephen Guest, the handsome heir to a shipping business which is co-owned by Maggie's uncle Deane (Lucy's father) and employs Tom, who is trying to make enough money to buy back Dorlcote Mill, swindled away by Mr. Wakem. Stephen is ostensibly Lucy's boyfriend, but he soon becomes attracted to Maggie, who has turned into a graceful young lady. He also happens to be Philip's friend, and this can lead to nothing good. Maggie is thrust into a gnawing dilemma--she loves Stephen but feels too much pity for Philip to abandon him; her love for Stephen is consumed by guilt. And on top of this, Stephen reveals himself to be remorselessly selfish, concerned only for his own happiness. The ending, it must be said, is tragic, but not in the classical sense of being a consequence of the characters' flaws. I

Published by Thriftbooks.com User , 18 years ago
_The Mill on the Floss_ (1860) was George Eliot's third published book (after Scenes from Clerical Life and Adam Bede)and tells the story of Maggie and Tom Tulliver, two children who grow up in the middle-class rural community of St. Ogg's. It has been a while since I last read Mill on the Floss, I think that the last time I did I was in my early 20s, just graduated from school. I got a lot more out of the book this time. I think it profits both with re-reading and age. The first time I read it I identified so strongly with Maggie that I practically skipped over everything dealing with the other characters. I found Tom loathesome and the ending of the book appalling. As a slightly more adult human, I was able to read it for more than just Maggie's story and enjoy it even more. I was surprised by how compulsively I read it. I had every intention of stretching it out over several days, but I literally found that I could not stop reading it and carried it with me from room to room in the house. I laughed at Eliot's sly humor and this time around saw people like the Gleggs as people and not simply stock appendages of the story. I think what makes Mill On the Floss such a powerful book (aside from the writing style, which is excellent) is this notion of the divided self which is being worked out both through Tom and Maggie. Tom has a firm clear sense of right and wrong and is always being forced to question or do injury to that sense because of his very difficult sister. On the other hand, Maggie cannot seem to find the right balance between self-indulgence and renunciation. She never manages a way to negotiate between the sharp emotions that she feels and her desire not to inflict the consequences of those emotions on her family and friends. It is a tragedy that neither of them ever really manage to understand each other and are constantly hurting and being hurt in their drive to do the right thing and be who they really are. Interesting how Eliot plays with the tropes from all the popular weepy sentimental novels of the time. A young unattractive girl (unattractive because she has dark hair) overcomes poverty and goes on to attract the eye of the most fastidious and eligible man in town... However, in the world of St. Ogg's (unlike the novels of the sentimental sisters like Mary Jane Holmes) Maggie is unable to overcome her obstacles to happiness and is as trapped by her beauty and popularity as she was her unattractive hoyden girlhood. Given the position of women at the time and the strength of the social norms, it is unfortunately a much more believable view of the outcomes of things. If you have not read Eliot, I would agree that it is not her best book (still Middlemarch, for me, and I would begin there first) but it is hugely thought-provoking and honest. It should make many a young woman of today count their blessings and thank the stars that the world has changed since the time Maggie Tulliver was a girl.
Trustpilot
Copyright © 2022 Thriftbooks.com Terms of Use | Privacy Policy | Do Not Sell My Personal Information | Accessibility Statement
ThriftBooks® and the ThriftBooks® logo are registered trademarks of Thrift Books Global, LLC