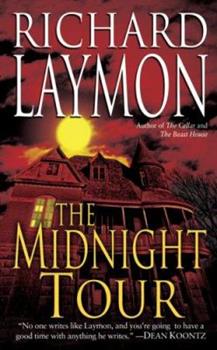 The notorious Beast House, the scene of brutal murders for almost a century, is a bigger tourist attraction than ever. There's one very speical tour, given only at midnight on Saturday nights, that's intended for the hardcore fans who will do anything to learn the house's hideous secrets. But not everyone will survive it!

Laymon at his best.

Published by Thriftbooks.com User , 14 years ago
In the small California town of Malcasa Point lies an old Victorian style house that is known as The Beast House and It has a dark and murderous history. For over ninety years people who have dared enter inside its walls at night have usually been found horribly mutilated the next day. The locals say that they met their gruesome end at the hands of the Beast and on certain nights they say your can hear its evil laugh coming from the house. Tourists have flocked to Beast House for years. They take an audio tour of the house going from room to room looking at grotesque wax figures of the victims the Beast claimed. There is also another tour that happens every Saturday night. It is called the Midnight Tour, and those who take it gets the no hold barred information about the Beast. They get to go to the parts of the house were the most gruesome events took place. Some say that the Beast still roams the house at night, and for one unlucky Midnight Tour group they will find out first hand that the Beast is more than just a legend. The Midnight Tour is the final installment of the Beast House Chronicles and after reading it I can say that is my favorite. I loved the first two books but this is by far the best of the bunch. It drew me in on the first page and kept me hooked the whole ride. Richard Laymon has become one of my favorite Horror writers because of books like Midnight Tour. I devoured this book within three nights consumed in the dark and twisted world Mr. Laymon created. Midnight Tour is loaded with sex, gore, and nonstop action. I especially enjoyed the characters in Midnight Tour. Mr. Laymon introduces you to a bunch of new characters, but he also brings back a few from the previous installments. Midnight Tours takes place many years after Beast House but you will find out what the old characters did with their life in the years leading up to Midnight Tour. I especially enjoyed following Sandy through the years. She as been one my favorite characters throughout the Beast House Chronicles and you will find out how she spent her life from story to story. Midnight Tour is Laymons masterpiece in my opinion. I have read most of his work but Midnight Tour is a cut above his other work. Mr. Laymon is a master of the Horror genre and I highly recommend Midnight Tour to all Horror fiction lovers. It is guaranteed to satisfy even the most jaded of fans.

Published by Thriftbooks.com User , 16 years ago
Well Layman has done it again only better!! This is the best book in the "Beast House" series. I paid alot to get my hands on this book and boy was it worth it! The characters are so interesting, real and the story is creepy. Highly recommend if you liked the first two books in the Trilogy "The Cellar", and "The Beast House." This whole series is fantastic. I wish there was another book in this series!!

A Book with Teeth

Published by Thriftbooks.com User , 16 years ago
I loved this book, gloriously descriptive, gorey, sexual, frightening, fascinating. The classic haunted house meets creature from the deep story. As usual laymon is pornographically generous but I happen to love that about him.

Fantastic. The best book in the Beast House series.

Published by Thriftbooks.com User , 17 years ago
I think this is the best book in the Beast House series and one of Laymon's best overall.This is the third book in the series. It's the last in the trilogy. ("Friday Night in Beast House" is a spin-off book.)"The Cellar" and "The Beast House" are the two prequels. You can read the books out of order."The Cellar" is open-ended and sort of a letdown. Don't finish it before you get one of the other two books.

Take the tour into the darkness

Published by Thriftbooks.com User , 18 years ago
Continuing the Beast House series started by the Cellar, continuing with The Beast House and ending up here Laymon continues to write with the eloquence and sheer shock that we have come to expect.This novel lets us greet old friends, Sandy Hayes and Janice Crogan - albeit retrospectively as Janice is vacationing with her new husband - and introduces us to a whole host of new and intriguing characters. But the big question is does the beast still exist in Malcasa Point? Is Agnes Kutch harbouring beasts in the strange house across the street even now?The Midnight Tour is just that, an unexpurgated tour of the Beast House for 13 adults at midnight every Saturday. Such a wonderfully simplistic idea but one which you just wish you could go on. Laymon makes not only his characters come alive in this book but also the town of Malcasa Point.You care about Eve, Tuck, Warren, Dana and Owen............heck even Dark and Vein have their good points. But when he writes nasty characters he does so with abandon and Clyde and Monica illustrate this admirably being thoroughly nasty pieces of work and you can't help but smile as they "get theirs".Be prepared for a couple of sleepless nights as you find yourself unable to put this book down.
Copyright © 2022 Thriftbooks.com Terms of Use | Privacy Policy | Do Not Sell My Personal Information | Accessibility Statement
ThriftBooks® and the ThriftBooks® logo are registered trademarks of Thrift Books Global, LLC