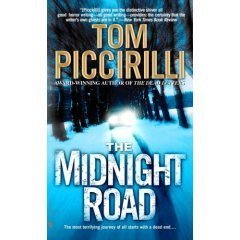 From the moment he saw the girl in the snowstorm, Flynn had less than an hour to live. But he'll remember his last fifty minutes long after he's dead. As an investigator for Suffolk County Child Protective Services, Flynn has seen more than his share of misery, but nothing could prepare him for the nightmare inside the Shepards' million-dollar Long Island home. In less than an hour, that nightmare will send him plunging into a frozen harbor-and awaken...

Published by Thriftbooks.com User , 14 years ago
There are two writers extant who can bring me to tears, to real laughter, and sometimes, to screaming in frustration or anger. One of them is Tom Piccirilli. When I first picked up The Midnight Road, I remembered, at once, the very first line of the book from a little taste given at the back of his last novel, The Dead Letters: "Flynn remembered the night of his death more clearly than any other in his life." Wow! And, of course I read through that little taste and decided Ihad to stay alive for another year or so to finally read the entire book. Which I have. Twice. Wow! This is the story of Flynn, a forty year old man who carries enough grief and pain and regret to fuel an entire city. Everyone he loved died, but the worst death was that of his brother, thirty years gone. Flynn still drives the Charger in which is brother and girlfriend met their ends. He is a deeply flawed, deeply empathetic man who works for Child Protection Services just to try and ease or prevent yet more suffering. Too many people think that a guy working for CPS is a potential pederast, and don't look kindly on him. In trying to save a child and her naked and scarred autistic brother who was locked in a cage from their nutsoid gun-toting mom, Flynn gets to die. For twenty-eight minutes. (not a record!) After that, everything goes downhill. People start falling dead around him, and the cops think he's involved. Which he is, but not in the way they think. So he has to find out what's going on. Good story. Terrific story, in fact, studded with all kinds of oddities. Like the ghost dog who died along with Flynn and then came back to haunt him, still wearing plastic booties and a sweater. Like Flynn's boss, Sierra, whose face is full of reconstructive plastic. But the best thing, the very best, is the writing itself and all those terrible emotions it conjures up. There is something so very natural, so unforced and lacking contrivance about Piccarilli's writing that you just fall into it. You know that this is real: this is how people would think and talk and act. This is how it would go down in the world off the page. This is not a writer inventing stuff, this is somebody telling you how it is. It is that simple, and that amazingly good. And Piccirilli is really funny. Don't know why more people don't respond to that outrageous humour which is sometimes very subtle, sometimes very black, and sometimes absolutely silly. It gives a wonderful balance to all of the pain and misery which his characters have to endure. And this is why his writings can make me cry and laugh and steam with anger. He has that very rare ability to encite real emotional response in the reader, to render his characters so very alive that they walk off the page and into your thoughts. You may finish the book and put it down, but you will never forget it.

Published by Thriftbooks.com User , 14 years ago
Tom Piccirilli peoples his novels with the strange and eccentric characters whom we all know in real life. It's a gift few authors can match. He guides us expertly through their oddities and into a very real world, the one existing outside our own doors, and we're forced to wonder: how am I so fortunate to not have experienced this very thing? THE MIDNIGHT ROAD is no exception. It flows expertly from the powerful opening scene, and in the end closes by echoing not just themes from the beginning of the novel, but from the beginning of the story--which is not the same thing. Dark but not disturbing. Thoroughly engaging. Fast paced, but not neck breaking. Woven together with all the right words and none of those extraneous, useless words that can often be found littering the pages of other books. I can't say THE MIDNIGHT ROAD is just the latest in a line of increasingly powerful, poetic, and intriguing novels; that would understate things. Piccirilli has gotten better with every book, more subtle and more straight-forward and more direct and more accessible. I highly recommend it.

Published by Thriftbooks.com User , 14 years ago
A mesmerizing mixture of noir, crime, horror & suspense elements, told in Piccirilli's always literate and darkly humorous way. The plot flows fast and furiously, and though it's exciting and thrilling, it's also intensely emotional on truly human level. Flynn "the Miracle Man" is a wonderfully "tragic" hero, the kind we root for in the face of all manners of adversity. Piccirilli knows his noir: this is a brilliant throw-back to the atmospheric classics, but written with a modern style and fun feel to it.

A thriller not to be missed

Published by Thriftbooks.com User , 14 years ago
Flynn may be the luckiest man alive. If, that is, your definition of "lucky" includes being harassed by a dead talking dog and having the folks around you dropping dead at an alarming rate. The Midnight Road is a great novel full of twists and turns and blind curves. Piccirilli is a maniac behind the wheel and he's got the pedal pressed all the way to the floor from the opening lines right through to the final, breathtaking conclusion. For those who are already fans, we've got Piccirilliesque oddball characters trapped in bizarre situations, trying to bust through the wall, but on this outing, the man has taken his usual fluid style, dipped it in gasoline and set it aflame. For new fans, what are you waiting for? This book, like the ones that've come before, only solidifies Piccirilli's position as absolutely one of the best crime writers working today. That's all folks, I've gushed enough (never!). Buy the book, fasten your seatbelts and don't blink. You don't want to miss a word of this one.

Published by Thriftbooks.com User , 14 years ago
Piccirilli's new novel, The Midnight Road (June 2007; Bantam) is his best to date. He has the knack to make memorable characters and a realistic plot; his voice is truly chilling and original. This is a well-mastered beautiful piece of literature that brings suspense and wonder--very unsettling. If your a fan od Dean Koontz, this novel would be a great read for you. A lyricaly compelling thriller! --Joseph McGee, author of In the Wake of the Night, Phil's Place and Darkness Won't Rest: Phils Place II
Copyright © 2020 Thriftbooks.com Terms of Use | Privacy Policy | Do Not Sell My Personal Information | Accessibility Statement
ThriftBooks® and the ThriftBooks® logo are registered trademarks of Thrift Books Global, LLC