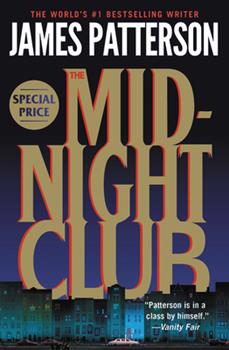 "The Midnight Club is the novel I wrote just before Along Came A Spider . I'm certain that both Alex Cross and Sampson originated in ideas I had while writing this story. It's one of my favorites." - James Patterson Bestselling author James Patterson weaves a suspenseful tale of a powerful mobster who runs up against a very determined cop and his faithful crime fighters. A stunningly brilliant psychopathic killer who has skillfully eluded the police...

Published by Thriftbooks.com User , 15 years ago
I don't usually care for James Patterson's non-Alex Cross books, so I was a little wary of this, one of his earlier books. However, I was pleasantly surprised by the story, which kept me on the edge of the treadmill, so to speak. The main character, John Stefanovitch (Stef), is a good, strong, believable character who rebounds from a brutal attack that leaves him in a wheelchair to take down St. Germain (the Grave Dancer) who organized the ambush in which Stef was injured and who killed Stef's wife. We catch up with Stef two years after the ambush. He has returned to his job on the NYPD and is still determined to bring the Grave Dancer down and to fight against organized crime. Stef is smart and tough and in no way a victim. Sarah, a true-crime writer who is writing a book about the Midnight Club, a group of organized crime leaders, is also a good, strong character and is more than a match for Stef. The relationship that develops between them is realistic and unforced. However, it is the young police officer, Isaiah Parker, who steals the show. He is a terrific character- young, idealistic, and determined that good should prevail over evil through whatever means necessary. This book raises the interesting issue of how does good fight against evil when all legal methods fail. The way the book answers the question is gratifying. Full credit must be given to the narrator of the audio version, Robert Forster. He uses his voice to give life to the various characters, with the different people easily recognizable by the voices used. If I have a problem with the book, it is the question of why it did not occur to any of these people that Sarah and her son would be an obvious target for the crime lords and take steps to protect them. But that's a minor quibble and in no way detracted from my enjoyment of the book.

Published by Thriftbooks.com User , 18 years ago
This book is just as good as the Alex Cross series and has one of the best villains ever created. The basic plot is that there is one organisation that every mafia, crime and drug organisation is controlled by. The killer in this book is the head of this organisation.The detective in The Midnight Club is also an interesting character being that he is confined to a wheel chair.A lot of reviews seem to dislike this book but I think it is sensational. For those who have never read a Patterson novel it is also great as you do not have to be familiar with any other books to fully appreciate the characters. For those who have read them this is a different detective to follow other than Alex Cross and the Women's Murder Club.

Published by Thriftbooks.com User , 21 years ago
I thought this was one of his better books not involving Alex Cross. It had an interesting storyline with several good twists. I would recommend this book.
Copyright © 2020 Thriftbooks.com Terms of Use | Privacy Policy | Do Not Sell My Personal Information | Accessibility Statement
ThriftBooks® and the ThriftBooks® logo are registered trademarks of Thrift Books Global, LLC