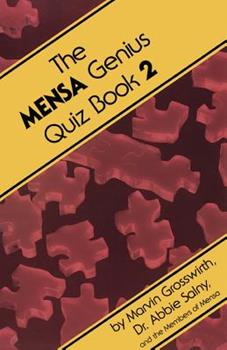 So You Think You're Pretty Smart...Try these quizzes, games, puzzles and strategies to find out just how intelligent you really are. Following the success of The Mensa Genius Quiz Book, here is another challenging collection of brain busters complied by Mensa, the internationally famous high-IQ society. You need an IQ in the top 2 percent of the population to join this elite group; this book enables you to match your wits against theirs.Just in case...

Published by Thriftbooks.com User , 17 years ago
This the second book of quizzes from Mr. Grosswirth, a well- known and long-time Mensa member, who probably goes back 40 years with Mensa. The questions range greatly in variety and difficulty, and there's enough here to challenge anyone from a neophyte test taker to a more experienced, battle-scarred IQ test veteran (like me :-). The question of IQ is a fascinating one, and the problem of accurately measuring human intelligence, despite over 100 years now of research on the subject, is still not resolved. One problem is that progress in the brain sciences over the last 50 years has given us a different perspective on intelligence, and one that current IQ tests really can't address. For example, the brain is really an amazingly complex network comprised of 14,000 major and minor brain centers, and each one contributes some function, some big, some small, to the overall integrated functioning of the brain and of intelligence. So far there is still no IQ test that assesses the true functional integration of the brain, although one could claim that Spearman's G, or general intelligence factor, first proposed by Spearman back in the 20s, is a proxy for that. Also, in the same vein, J.P. Guilford's structure of intellect model divided intelligence into 120 different discrete abilities, and most intelligence tests usually only assess three or four different factors. The DAT or Differential Aptitude Test measured 9, and was better than most in this regard, but technically, it is an aptitude test and not an IQ test, since IQ isn't the same as aptitude, since an IQ test is supposed to measure "non- crystallized intelligence." And for you old-time psychometrics guys out there (like me, sort of), remember the great L.L. Thurstone's "orthogonal matrices with varimax rotation?" (basically an early form of analysis of variance). (Sorry about that; I just had to put that blast from the past in there. :-)) Finally, the worst criticism of present-day IQ tests is that a simple, 20-minute vocabulary test can be shown to be 90% as accurate as the longest omnibus and multifactor test, a rather embarrassing fact considering the thousands of man years of effort that have gone into creating some of the most famous and heavily standardized IQ tests. Related to this fact is that the math subtests typically correlate at the .75 level with the verbal tests, which is quite high and should be lower so that a purer factor loading is achieved, although some of the spatial subtests only intercorrelate at .5 with math and verbal. And then there's the fact that the best predictor of college grades (and even of overall success in life) is high school grades, not an IQ test or even the supposed college exams like the SAT. Research efforts have shown that once one reaches an IQ of 120, further IQ points above that level are not as important as social intelligence, something that has come to the fore in recent decades. Unless you want to be a physicist or something, an IQ of

Published by Thriftbooks.com User , 21 years ago
There seem to be several different categories of people who purchase books such as this: Those with superior intelligence who use these exercises as a kind of intellectual aerobics inorder to "stay in shape", those with above-average intelligence who are curious to know how well they can "do", and those with lesser intelligence who think that purchasing the book and completing the exercises will somehow make them brighter. (Perhaps there is another group whose members purchase the book and display it prominently but complete no exercises.) In recent years, I have purchased a number of these books and consider this one to be among the best. (Yes, thanks for asking, I completed the exercises but how well I did is not relevant to this review.) For whom do I recommend this specific book? Anyone who is curious to know what the exercises involve, how well she or he does when completing them, and (of greatest interest to me) learning WHY her or his responses are correct or incorrect. Completing exercises in several different books also reveals certain patterns of thought which stimulate the mind to approach a given problem or question from different perspectives. For example, what do the answer choices share in common? What is missing among the options offered? Over time, we develop certain mindsets. For example, we tend to see only what we expect to see. So-called "brain teasers" force us to perceive a given problem or question differently. The brain is a muscle which, like all other muscles, needs regular exercise. Books such as this provide that.

Published by Thriftbooks.com User , 23 years ago
I really enjoyed this book. It was a fascinating read. I really learned a lot. I hope to try out more of their books.
Trustpilot
Copyright © 2022 Thriftbooks.com Terms of Use | Privacy Policy | Do Not Sell My Personal Information | Cookie Preferences | Accessibility Statement
ThriftBooks® and the ThriftBooks® logo are registered trademarks of Thrift Books Global, LLC