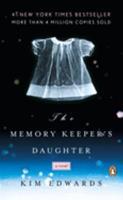 A #1 New York Times bestseller by Kim Edwards, The Memory Keeper's Daughter is a brilliantly crafted novel of parallel lives, familial secrets, and the redemptive power of love Kim Edwards's stunning novel begins on a winter night in 1964 in Lexington, Kentucky, when a blizzard forces Dr. David Henry to deliver his own twins. His son, born first, is perfectly healthy, but the doctor immediately recognizes that his daughter has Down syndrome. Rationalizing...

A Wonderful Story of Regret and Redeption!

Published by Kristin , 11 months ago
Secrets--we all have them, right? This is a tale of regret, redemption, sadness and joy. A compelling story that weaves through many themes: the secrets we harbor (a great deal from even from those we love the most) and our ability to rationalize all manner of lies. It drove home the point that we cannot decide the protection of others. When I picked up this book, I was on the fence--reviews were glowing or terrible. I will say that I did not empathize with either David or Norah--both of whom I found to be very selfish individuals---deciding to "give away" a child, affairs, etc. Lies come out of one mouth and entangle all those surrounding, eventually suffocating. Although, there was a "happy" ending, I will say that it was not the one that I anticipated and for that I am thankful.

The Memory Keeper's Daughter: great fiction and a great romance

Published by Thriftbooks.com User , 14 years ago
Normally I wouldn't touch a mix of fiction and romance, but this one is different. Really awesome! My first daughter was born lifeless and gray-blue. "Like a seal," I remember thinking as the room went bright white and the doctor started suctioning her mouth. I pushed my wife's head back onto the pillow so she wouldn't be able to see the slick form down below. The oxygen tank hissed angrily. In the minutes that followed, as we waited and waited for my daughter to cry, all the hopes we'd stored up were suffocated under the weight of our new future that filled the room with fear. Mercifully, few parents experience the shattering birth moment we did, and it may be that memories of my daughter's birth magnified the emotional impact of Kim Edwards's debut novel. But I think anyone would be struck by the extraordinary power and sympathy of The Memory Keeper's Daughter. The book opens during a snowstorm in Lexington, Ky., in 1964, when Norah Henry realizes that she's going into labor. The weather keeps her doctor from making it to the office in time, but her husband, David, is an orthopedic surgeon with enough experience to handle the situation. Under the partial influence of gas, Norah gives birth to a healthy baby boy, but as David tells her the happy news, another series of contractions begins. He quickly sedates his wife again, and she gives birth to another child, a girl with Down syndrome. "Later," Edwards writes, "when he considered this night -- and he would think of it often, in the months and years to come: the turning point of his life, the moments around which everything else would always gather -- what he remembered was the silence in the room and the snow falling outside." In that quiet, terrifying moment, the grief and resentment caused by his sister's death at the age of 12 washes back over him, and he acts to preserve their vision of a happy future. He hands the baby to his nurse and asks her to take it to a home outside the city for handicapped children. When Norah awakens a few minutes later, he tells her their second baby was stillborn. "He had wanted to spare her," Edwards writes, "to protect her from loss and pain; he had not understood that loss would follow her regardless, as persistent and life-shaping as a stream of water. Nor had he anticipated his own grief, woven with the dark threads of his past." Some ominously saccharine moments indicate that Edwards can slip into the treacly trade -- "The love was within her all the time, and its only renewal came from giving it away" -- but these gaffes are relatively infrequent, especially considering the presence of a handicapped character, who would, in less disciplined hands, be used to generate a waterfall of sentimental tears. The episodic structure allows Edwards to survey these two families through the '60s, '70s and '80s, but frankly she's best when she moves slowly. The middle section skips through the years, obscuring the characters behind Significant Historical Moments:

A Nearly Perfect Selection For A Book Club

Published by Thriftbooks.com User , 15 years ago
I was in a bookstore the other day and noticed that in a section marked off for book clubs, THE MEMORY KEEPER'S DAUGHTER seemed to be the choice of the month. Since it's found a home on the bestseller lists, this is probably the case all over the country. A lot of people are reading THE MEMORY KEEPER'S DAUGHTER, and after you read it you'll probably agree it's not without good cause. The book tells the story of David and Norah Henry. Norah gives birth to twins and one has Downs' Syndrome. David makes the rash decision to institutionalize the child and tell Norah the child has died, convincing himself it's for the best. The remainder of the book deals with the repercussions of the decision not only on David and Norah and their family but also Caroline Gill, the only person who knows the full extent of what happened the night the twins were born. Now if I am going to be honest, I can't say for sure that I would have completed the book if the book club I belong to didn't select this title. I found the subject intriguing, the writing is beautiful, and it's compelling, but I could see it as a book I'd start at one point and finish at a later date as I do with many books. I guess it's just my habit, but I had to complete the book in an allotted amount of time, so I did so in a few sittings. If anything, this heightened the dramatic impact. The more I read, the more I was drawn into the story. I found myself reacting, in some cases somewhat strongly, to situations that take place in the book, decisions made, and the aftermath of these decisions. The more I read, the more I could not wait until the group met so we could really examine this book. In the end we had one of the liveliest and most diverse discussions I can remember. We looked at questions such as: Why do we make certain decisions we make and how would we react if we were in the same situation as the characters in the book? Is there anything that can't be forgiven? When, if ever, is it appropriate to keep secrets? The book touches people on so many levels, the possibilities for discussion are endless. My guess is that it's also a book that will keep coming back to a reader, a sure sign of a good book. If you are thinking of a perfect book for a book club, this could be a perfect choice. As a matter of fact, the only book I recall eliciting more discussion is THE KITE RUNNER.

The Most Talked Book Today

Published by Thriftbooks.com User , 15 years ago
The most talked about book today. A phenomenal first novel by Edwards. The choice of a father to hide the birth of one of his twins has far reaching consequences."

Published by Thriftbooks.com User , 16 years ago
I don't read a lot of fiction and I most especially do not read romances. I'm not sure how this book is categorized but it is the most compulsively readable, emotional, and memorable book I've read since "Gone With the Wind" over 40 years ago. This is an epic story of a doctor who, in an emotional moment and with all his medical knowledge telling him to protect those he loves, makes a decision that affects him and everyone around him forever. On a blizzardly night in 1964, David Henry helps his wife give birth to twins, one a perfect boy and the other a girl with Downs Syndrome. At that time, imperfect children were "put away" in institutions where they died young and families and friends spoke of them in shame-filled whispers, if at all. David grew up with a very sickly sister whose death at age 12 ended all meaningful life for his parents. With all good intentions of sparing his wife and new son the pain he and his parents endured, he made a fateful decision and told his wife the little girl had died at birth. It was a decision that, once made, could not be redeemed nor remedied. Time inexorably moves away from that moment but, instead of becoming distant, it grows tentacles that seize their beings and influence everything for the next three decades. We learn a photograph can capture a moment but it cannot tell you what encompasses it, what came before and after. It cannot effect change, it cannot correct. One moment, one choice, and an ever-widening circle of consequences, many roads taken and many not. The writing in The Memory Keeper's Daughter is so well-articulated, the story itself is so engrossing and so different from any I have read before, that hard as I tried to remain disaffected, about 100 pages before the end I felt actual pain knowing there was a last page. As I came to know every nuance of these characters, I wanted to reach into the pages and tell them everything, something, anything, to stop time, to take a different road and change the past, then go on again. Honestly, I have never felt quite this way about a book before.

Published by Thriftbooks.com User , 16 years ago
Read with both understanding and understatement film and stage actress Martha Plimpton delivers a first rate performance of Kim Edwards's debut novel. Stage trained voices tend to have an added richness, a resonance not found among other audio book readers. Such is the case with Plimpton in this story of a Down's Syndrome child and the two families she binds together. When Dr. David Henry's wife goes into labor during a paralyzing winter storm he is forced to deliver his child. His wife, Nora, is under heavy sedation and he is assisted by Caroline, his nurse. Henry's joy is boundless when he delivers a healthy son and also discovers that he is to be the father of twins. With the birth of his second child, a daughter, he makes an immediate and fateful decision. The child is born with Down's Syndrome so believing that he will spare his wife pain he tells Caroline to immediately take the child to an institution and never reveal what she has done. He tells Nora that their son's fraternal twin died at birth. Caroline is far too kind hearted to obey Henry's orders, so she flees to another city where she raises the daughter, Phoebe. We can never know whether some decisions we make are for good or ill or what effect they will have upon the future lives of those we love. Author Edwards traces the story of this particular family over 25 years as Nora mourns the loss of her baby girl, and a long kept secret is revealed. - Gail Cooke
Copyright © 2022 Thriftbooks.com Terms of Use | Privacy Policy | Do Not Sell My Personal Information | Accessibility Statement
ThriftBooks® and the ThriftBooks® logo are registered trademarks of Thrift Books Global, LLC