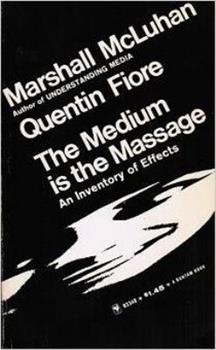 The Medium Is the Massage: An Inventory of Effects

First published in 1967, this text is now more relevant than ever, as McLuhan's foresights about the impact of new media is actualized at unprecedented speeds via the Internet. It portrays technologies as an extension of man, illustrating how our senses are massaged and our preceptions altered as these devices become integral parts of our lives.

Wisdom from the Prophet of the Internet

Published by Thriftbooks.com User , 16 years ago
Marshall McLuhan (1911-1980) never conceived of the Internet. But the great communications theorist understood where communications was going, and the revolutionary effects of its direction. This book takes his sometimes impenetrable prose and places it in a context of compelling photographs, advertisements, and cartoons in order to dramatically illustrate the meaning of his words, and the radical effect that changes in communications technology have on the lives of all the world's citizens. "It is impossible to understand social and cultural changes without a knowledge of the workings of the media," he writes. The Medium is the Massage begins and ends with quotes from Albert North Whitehead. The first is that "The major advances in civilization are processes that all but wreck the societies in which they occur." The last is that "It is the business of the future to be dangerous." There always are jeremiads against the new by those who are accustomed to the old. McLuhan quotes Socrates: "The discovery of the alphabet will create forgetfulness in the learners' souls, because they will not use their memories; they will trust to the external written characters and not remember of themselves...You give your disciples not truth but only the semblance of truth; they will be heroes of many things, and will have learned nothing; they will appear to be omniscient and will generally know nothing." The effects of the media on individuals are profound. "All media work us over completely. They are so pervasive in their personal, political, economic, aesthetic, pyschological, moral, ethical, and social consequences that they leave no part of us untouched, unaffected, unaltered. The medium is the massage. Any understanding of social and cultural change is impossible without a knowledge of the way media work as environments. All media are extensions of some human faculty--psychic or physical." Media affect you, the individual citizen. "Electrical information devices for universal, tyrannical womb-to-tomb surveillance are causing a very serious dilemma between our claim to privacy and the community's need to know. The older, traditional ideas of private, isolated thoughts and actions--the patterns of mechanistic technologies--are very seriously threatened by new methods of instantaneous electric information retrieval, by the electrically computerized dossier bank--that one big gossip column that is unforgiving, unforgetful and from which there is no redemption, no erasure of early 'mistakes.' We have already reached a point where remedial control, born of knowledge of media and their total effects on all of us, must be exerted...." Media affect your family. "The family circle has widened. The whirlpool of information fathered by the electic media--movies, Telstar, flight--far surpasses any possible influence mom and dad now bring to bear. Character no longer is shaped by only two earnest, fumbling experts. Now all the world's a sage." Media a

The Best Place to Start

Published by Thriftbooks.com User , 17 years ago
First published in 1967, the pithy aphorisms and ideas of 'The Medium is the Massage' have been drawn from McLuhan's many other books and articles. Superbly designed by Quentin Fiore, the typography, layout and accompanying images wittily illustrate the content, making this McLuhan's most accessible text: it is by far the best place to start if you are interested in investigating McLuhan's weird, wonderful approach to the impact and importance of the media and technology. A year after its publication an audio version was released which combines selections from the text, read by McLuhan, Fiore and Jerome Agel, with an eclectic mix of musical samples and accompaniment. (This album is today available on CD.)

Published by Thriftbooks.com User , 21 years ago
I get goosebumps just thinking about reviewing this book wherein McLuhan coins the term "the global village." On the internet, 33 years after this book was published, McLuhan had the insight and perspicacity to see just how electronics will be changing us. He's more of an electronical anthropologist here. The flash of the book has worn off some by now and the graphics, the photos and creative layout of the pages seems to be more of a period piece. Still, because this brief book portrays so many key concepts that currently fill us now. We do not notice the power of the media until we are someplace that does not have it. Like a fish out of the water, we take for granted the influence of the technology around us; we assume that they have been with us forever and we never slow down to challenge these concepts. So, thank God for McLuhan's book.I've recommended this book to my students and it's fun to see how they read it (because it's so short) and open up to some of the concepts about the media's power. It's as if they had known it all along, but needed McLuhan's book to come along and draw it out of them.

Published by Thriftbooks.com User , 22 years ago
I have won innumerable wagers, thanks to McLuhan. Every social function has at least one know-it-all, and as soon as I encounter him/her I manage to work in McLuhan and The Medium Is The Massage. "Message", I am corrected. "No, 'Massage'" I retort. A wager ensues, and I get my copy from the trunk of my car and pocket the winnings. And I get the pleasure of humiliating a stuffed shirt in front of lots of people.

-The- seminal work about life as we know it

Published by Thriftbooks.com User , 25 years ago
Marshall McLuhan is one of the most important thinkers of our century. Understanding his ideas and his perspective is -essential- for understanding what has happened to mankind in the last twenty thousand years, especially in this century, as our technology modifies us at an accelerated pace. That's what this book, _The Medium is the Massage_, is all about. I always recommend this book to anyone involved with technology, communications, or the future. Although he originally wrote his ideas in standard prose (he was an English professor), hardly anyone read his books -- let's face it, most of us won't wade through non-sensational nonfiction. So he produced this book to exploit the printed page in its hottest form, making his ideas as tasty and easy to swallow as a hot fudge sundae. This book is thus a living example of his thesis! Though the number of ideas per page is much smaller than in his standard works (much much smaller), it packs a powerful punch by delivering the key ideas connected to descriptive graphics (one picture is worth...). This book is to anyone involved in technology and the future what the Bible is to Christians or the Koran is to Moslems. Don't just get this book and read it -- consume it. The future of our civilization may depend on it.
Trustpilot
Copyright © 2022 Thriftbooks.com Terms of Use | Privacy Policy | Do Not Sell or Share My Personal Information | Accessibility Statement
ThriftBooks® and the ThriftBooks® logo are registered trademarks of Thrift Books Global, LLC