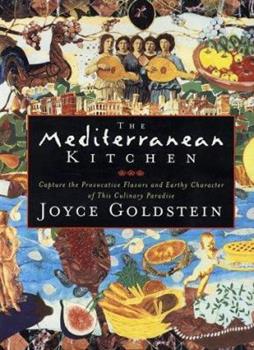 The Mediterranean Kitchen brings the dazzling array of tastes of Mediterranean cuisine into your kitchen. With clarity, easy style, and tremendous passion, Joyce Goldstein celebrates some of the world's most popular and flavorful foods. Travel to the sun-drenched southern coasts of Europe and North Africa to sample cuisines remarkable for their lustiness and sparkling tastes. From Spanish tapas to Provencal ice cream with lavender and honey, from...

Good Mediterranean Recipes for the Rest of Us. Recommended

Published by Thriftbooks.com User , 17 years ago
I was just a bit disappointed when I began reading this book, as I was expecting something a bit more scholarly, based on the title, the very classy artwork on the cover, the impressive blurbs from Paula Wolfert and Jacques Pepin on the back cover, and the large number of expository books on Mediterranean cuisine by the likes of Ms. Wolfert. As it turns out, this book is neither a historical and geographical study like Claudia Roden's `The New Book of Middle Eastern Food', nor an analytical study of Mediterranean cuisine like Nancy Harmon Jenkins' `The Essential Mediterranean'. The book is teacher and restaurant chef Joyce Goldstein's interpretation of a cuisine which skips around the entire rim of the Mediterranean.Since these other books and many like them have some interest beyond the recipes themselves, Ms. Goldstein's book will shine primarily if she succeeds in doing a better job with the recipes. After all, unlike the other authors who are primarily culinary journalists, Ms. Goldstein is a professional chef with credentials that include a stint at running the shop for Alice Waters at Chez Panisse.Thus, what I did was to compare Ms. Goldstein's recipes to those for the same dish in the books by the culinary journalist / scholars. The first is the old war-horse Baba Ghanouj. Comparing Ms. Goldstein to Ms. Roden, the first difference one sees is that Ms. Goldstein adds pine nuts to the recipe and gives a wider range of presentation tips. The more significant difference is that Ms. Goldstein's procedure is just a bit fuller and fussier in its detail. While Ms. Roden clearly knows her stuff, Ms. Goldstein proves her professional kitchen experience here.The second comparison was based on a Moroccan Lamb Tagine with Lemon and Olives, comparing again to Ms. Roden. The first thing which jumps out at you is that Ms. Goldstein is very clear that this is not an authentic dish, as she substitutes a lemon conserve for the traditional briny Moroccan preserved lemons prepared with salt. The second big difference is that Ms. Goldstein begins by marinating the lamb cubes with a spicy olive oil `rub'. The third big difference is that Ms. Goldstein (optionally) adds baby artichokes and specifies `Moroccan or Kalamata' olives to Ms. Roden's generic green olives. Lastly, Ms. Roden's method is specifically written to be done in a tagine, while Ms. Goldstein's procedure is more friendly to a commercial kitchen.The third comparison with Ms. Roden was for a Fish and Couscous soup / stew. Ms. Roden's recipe is an Algerian recipe, while Ms. Goldstein bases her recipe on a suggestion from Paula Wolfert. Both recipes call for harissa and both books give recipes for same. Ms. Goldstein's recipe from Pantelleria adds Moroccan Charmoula (go figure), a spicy lemon / olive oil based fish sauce. The procedures are remarkably similar, although Ms. Goldstein's method is more clearly based on restaurant practice, where prepared fish fumet is used and lots of flavor are imparted

Published by Thriftbooks.com User , 17 years ago
I got this cookbook for Christmas and have made about 10 of the recipes since that time. Although I didn't know anything about Mediterranean cooking before I got this book, all of the recipes I've tried have been a success. The techniques are easy, and most of the ingredients are easy to find. In addition to vegetables and grains, Goldstein includes recipes for several different types of meats (lamb, beef, poultry and pork), and she explains how some of the same recipes can be given different national flavors by varying the spices. I think this shows how international Mediterranean cuisine really is.I will put in one caveat, though -- not that I have any complaints about this book, but I can imagine that some people would. There's been some buzz about how healthy Mediterranean cooking is lately, and if you're looking for a health food cookbook, this might not be the one for you. For example, my favorite recipe in the book, Izmir Koftesi with Hunkar Begendi, calls for a cup of heavy cream and a few tablespoons of unsalted butter in addition to a pound and a half of ground beef (this is to serve four). Goldstein is fairly generous with the oil and butter in the other recipes as well. I don't mind this, and if you're used to modifying recipes to lighten them up, it won't be a problem for you. But if you need low-fat cooking techniques spelled out for you, you will probably want to look at a Mediterranean cooking book that is specifically geared toward a low-fat diet. But you should definitely get it in addition to this one!

Published by Thriftbooks.com User , 18 years ago
This is one of my favorite cookbooks in my library of 100 plus books. I have made almost everything in this book. It's a must have for your library since it's a great resource.

Flavors of the Sun

Published by Thriftbooks.com User , 19 years ago
This cookbook will not disappoint; Joyce Goldstein's writing is encouraging and funny, and you will find youself making restaurant-quality meals at home while venturing into the history of Mediterranean cuisine at the same time. I tried the chicken with honey-tomato sauce and couscous and was in heaven. The peasant risotto is the best thing I've ever made with what are essentially kitchen "scraps," and the hardcover edition I have is disintegrating from over-use. I came to buy a new copy --that's how much I love it! Joyce Goldstein is my heroine of the kitchen.

Every recipe we have tried worked well and became a favorite

Published by Thriftbooks.com User , 21 years ago
This cookbook is a winner! Most of the recipes we have tried have become favorites. If we were having company for dinner, I wouldn't hesitate to try a new recipe from this book.
Copyright © 2020 Thriftbooks.com Terms of Use | Privacy Policy | Do Not Sell My Personal Information | Accessibility Statement
ThriftBooks® and the ThriftBooks® logo are registered trademarks of Thrift Books Global, LLC