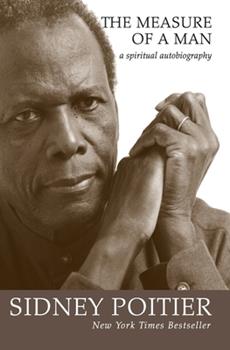 The Measure of a Man

I have no wish to play the pontificating fool, pretending that I've suddenly come up with the answers to all life's questions. Quite that contrary, I began this book as an exploration, an exercise in self-questing. In other words, I wanted to find out, as I looked back at a long and complicated life, with many twists and turns, how well I've done at measuring up to the values I myself have set. --Sidney PoitierIn this luminous memoir, a true American...

Published by Tito Soto , 1 year ago
Thank You Mr. Pointer for this glimpse into your personal thoughts of what is and what is not... Important.

Published by Thriftbooks.com User , 3 years ago
Mr. Poitier deserves a standing ovation for this one! How lucky we are as readers to be let into this man's mind, where he tells us of his experiences that shaped him and his character. Who knew about his upbringing and what he went through to be where he's at today?! I mean wow, I'm just blown away! I'd recommend this book to any and everyone.

Glad to Be Alive

Published by Thriftbooks.com User , 14 years ago
I grew up in the South and, when I was in high school in the early sixties, Mr. Poitier's two blockbusters, "Raison in the Sun" and "Lilies of the Field" came out. There was something about him, even then, that caught my attention. Who WAS this man? It always seemed he was a "thinker" - a "seeker" - a bit restless with himself. I recently picked up The Measure of a Man and my curiosity made me read it. Who IS this man - I wanted at last to find out. The book begins in Cat Island, the Bahamas where he was born and lived during his early years. As Mr. Poitier describes his youth, it is reflective and feels like an intimate fireside conversation with a friend talking about a loved one departed. There is gratitude and respect - a certain remorse for doing some "kid things" that are so hurtful to those you truly love - and a reexamination of some of the "truths" he was taught. Then the autobiography goes from there onto other stages in his life where he interacts with the realities and the illusions of life and comes to a sense of who he is and what is important. I guess I expected more of a "success story" about someone who is obviously very accomplished. What I got instead was a very touching and poignant sharing of a personal journey of a man making his way through life - no better and no worse than anyone else - immune from neither happiness nor disappointment - but glad to be alive. Because so much of Mr. Poitier's autobiography had to do with things both good and challenging that just showed up in his life, it reminded me of another book by Ariel & Shya Kane called Being Here: Modern Day Tales of Enlightenment. In Being Here, the Kanes talk about things that have happened in their lives in a very light way that demonstrates how they and we can experience life more fully and more deeply - by just "being there" for what's happening when it's happening. I really enjoyed reading both of these books and recommend them

Published by Thriftbooks.com User , 15 years ago
Being a good little white boy, I knew little about Sidney, but felt respect for him as an actor due, in part, to my discovery of "The Defiant Ones" as a child. (The movie is a powerful work about racism, and I loved it.) This spiritual autobiography is no judgmental, squeaky-clean depiction of walking with God, nor is it an in-depth detour into the tribal religions available to Sidney as a child in the Bahamas. This book is an open-hearted view of the circumstances and, more importantly, the values that guided Sidney Poitier to the pinnacle of acting. He candidly discusses his failures as husband and father. He speaks lovingly of the example his parents gave him. And he shows the power of holding to your integrity no matter the cost. By holding to this integrity, Sidney lost some opportunities and also gained respect from the white community, while facing ridicule as a "sell-out" from his own community. What stands out in his story is his desire to bring these communities together with respect, refusing to be dragged down by the bigotry and anger of either side. He speaks powerfully, encouraging us to focus anger in a positive way. Mr. Poitier writes in an eloquent, yet communicative style. At times, he borders on unfocused rambling, but even then he has worthy things to say. This book is a valuable discourse on never giving up on your goals, on reaching beyond yourself to be who you were truly created to be. Thank you, Sidney, for your time.

Published by Thriftbooks.com User , 15 years ago
I started out writing this review, begrudgingly. Once I heard "The Measure of a Man" had been selected by Oprah's Book Club, my initial reaction was: "There will be a million reviews and my two cents will be lost in a crowd-of -redundancies". With the above caveat, I am recommending this latest effort by Sidney Poitier, not only for what is in the book - I am endorsing it for what it lacks. Let me explain: Too often we hear public figures, with limited accomplishments (when compared to Mr. Poitier), extolling the virtues of their being - while asking one and all to bow down, kneel before their greatness, and kiss their naked feet. This book lacks that pomposity. Grandiose and vainglorious statements are replaced with accounts of compassion and humility. He states, quite eloquently: "I have no wish to play the pontificating fool, pretending that I've suddenly come up with answers to all life's questions". In spite of this assertion, there are "pearls of wisdom" on every page. His strength of character, endurance, and instinct for survival, can be traced, for me, anyway, back to the time when he was a kid. His mother kept throwing him back into the ocean --- until he could stay afloat on his own. I liked what his father, Reginald, (whose name, I much admire!) said to him: "The measure of a man is how well he provides for his kids". They were words from a man with limited means, yet possessed the insight, wisdom, and cornerstones, for survival of civilized society. From this exquisite book, I am convinced --- the true measure for all of us is not where we stand when times are bountiful, good, and rewarding, but where we position ourselves at times of crisis, peril, and uncertainty. Get this book. Whatever standard one uses ... it measures up! Reviewed by Reginald V. Johnson, author, How to Close More Customers

A wonderful memoir by a great human being

Published by Thriftbooks.com User , 22 years ago
In his autobiography, "Measure of a Man", Sidney Poitier talks about his failures as an actor, his struggles with life, and his encounters with nature. Poitier writes in a straight-forward style, making the book an enjoyable read. It's quite easy to get involved in Poitier's stories about his childhood skirmishes, his acting failures, and other sketches from his life, because he writes as if he were having a conversation with the reader. Poitier reflects on his past without sounding preachy. His tone has a sense of inquiry and wonder in it. A job well done by a fine human being.

Published by Thriftbooks.com User , 22 years ago
I would highly recommend this book to everyone. While I do not always enjoy autobiographies, this book is a great exception. It is not just filled with dates and facts. It reaches inside the man and into his very soul. From his beginning on Cat Island, to today's highly successful life as an actor, Sidney Poitier has had an incredible life. He was blessed early in life with the greatest blessing anyone can have - great parents! This book made me stop and think of all the many blessings in my life, too many of which I take for granted sometimes. I hope that everyone who reads this book, and especially young people, will benefit from his insight and wisdom.
Trustpilot
Copyright © 2022 Thriftbooks.com Terms of Use | Privacy Policy | Do Not Sell or Share My Personal Information | Accessibility Statement
ThriftBooks® and the ThriftBooks® logo are registered trademarks of Thrift Books Global, LLC