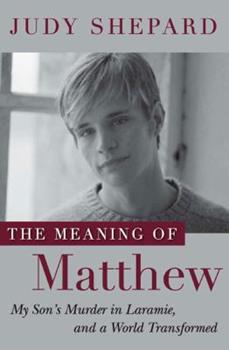 The Meaning of Matthew: My Son's Murder in Laramie, and a World Transformed

The mother of Matthew Shepard shares her story about her son's death and the choice she made to become an international gay rights activist Today, the name Matthew Shepard is synonymous with gay rights, but before his grisly murder in 1998, Matthew was simply Judy Shepard's son. For the first time in book form, Judy Shepard speaks about her loss, sharing memories of Matthew, their life as a typical American family, and the pivotal event in the small...

Published by Thriftbooks.com User , 13 years ago
He was very small, looked like he was 13 or 14, and when 18 year old Aaron Kreifels saw his body propped up against a fence, his mountain bike skidded across the road for it looked like a scarecrow, a "Halloween guy," Kreifels remembered. A tiny body, but soaked in blood, most of it under his head. By this time Matthew Shepard had been hung on that fence for nearly eighteen hours, his lungs gradually pooling with blood. How any mother could cope with the Laramie police findings I don't know, but it was up to Judy Shepard to take it all in without fainting, and she has written a book to try to find the meaning of Matthew--the meaning of his death, but also the meaning of his life, how did this all come to happen. It is a disturbing and chilling account, but it's human. We come to wonder about the killers and their girlfriends and their families, and how drugs and poverty have chipped away at their moral sense. One of the killers robbed a Keuntucky Fried Chicken of $2,500.00 (and "some desserts," adds Mrs. Shepard) and hid away in Florida to avoid the heat, then sneaked back when he thought it would be OK. Judy Shepard isn't what you'd call a natural writer, but she has given us something of a different order, the thoughts and feelings of a person devastated, and on top of it a person strong enough to pick up the pieces and do something that will mean something. There's always a through-line of something resembling guilt giving her narrative an edge of real feeling and conflicting pressures. The book opens up that way, herself living with her husband in the Middle East--so far away from Laramie that it takes her days to get back to her son's bedside. There was the puzzling and horrifying earlier incident when Matt was assaulted by several men in North Africa--again she asks herself, where was she? Matt was complicated, too, and like a bird he couldn't be contained by parental worry. He had to do what he wanted to do, and he had to go where he wanted to go. In that one way, he was just like his mother.

blessings for the memory of matthew shephard

Published by Thriftbooks.com User , 13 years ago
I wish to commend Judy Shephard very highly for her courage and strength to keep the memory of Matthew Shephard alive. To talk and write about him is the best way to make sure he is never forgotten or lost in the ongoing shuffle of daily tragedies. While an undergraduate at Brooklyn College, I was made aware of Matthew because the college was having a play about his tragic death. I wrote two papers about him, his life, his senseless death, the need for all people to be accepted for who they are and not what someone else wants them to be. i am a teacher of poetry now, at Brooklyn College. I will recommend this book to my students. I will be proud to do so. irene brodsky Teacher of Poetry and Author of Poetry Unplugged (Outskirts Press)

Published by Thriftbooks.com User , 13 years ago
What an incredible (true) story about all of us in the U.S.A. and around the world, of a beautiful (inwardly and outwardly) young AMERICAN man, and his most remarkable mother! One of the most inspiring books I have ever read. If Congress does not again get around to putting into law The Matthew Sheppard Hate Crimes Bill, then we remain, as a country, deeply ashamed, as hatred still trumps love and acceptance of ALL Americans.

Published by Thriftbooks.com User , 13 years ago
... to a world known icon, Judy Shepard has become synonymous with words like activist, equal rights, and legacy. There are many of us who idolize this woman, and even, dare I say, put her on a pedestal for her endless work in this area. However, the Judy Shepard in her new book, "The Meaning of Matthew" My Son's Murder in Laramie, and a World Transformed", is a simple mother, telling the wonderful story of her son's life, and the journeyhis death set her on afterwards. One of the marvelous surprises in this book of surprises is Judy's humbleness and straightforwardness. Coming from the west, growing up in Wyoming herself, Judy has an understanding of the land and the people there that permeates this wonderful book. She met and married her husband Dennis, and then proceeded to have Matthew, which turned out to be a complicated birth and early few weeks of life. Throughout this book, Judy shares little stories and insights into Matthew's character that truly humanize this now civil rights icon. This is a mother, writing about her son, with love. But it's honest. Judy doesn't hold back, when recounting her first suspicions about her son's homosexuality, when recounting some of his faults and foibles, and her own doubts as a mother. Somehow, throughout the book, she manages to maintain her composure, even when getting to the fateful, horrible nights and lingering days while Matthew barely clung to life. Read those chapters with Kleenex nearby. Even the hardest hearted of us will be fighting back tears. However, I must say, I don't feel for a second that Judy wants us to feel sorry for her, or slip into a maudlin remembrance of her son. I truly believe, as the book wraps up for us, that she is ultimately inspiring us to action. This book serves as a clarion call for those who wish for others to do the difficult work of equal rights to wake up and get involved; even in little ways, the littlest act can and does make a difference. From humble beginnings as a wife and mother, to world known activist, you leave the book admiring her and her family for the work they've done to make this world as better place for everyone. But in reality, this marvelous read is a mother's memories of her son, and this book serves as a monument to this boy, whom the country never met, but now knows well. Thank you Judy.

Published by Thriftbooks.com User , 13 years ago
Shepard, Judy. "The Meaning of Matthew: My Son's Murder in Laramie and a World Transformed", Penguin, 2009. A Defining Moment Amos Lassen The murder of Matthew Shepherd is a defining moment in modern GLBT. It was a day that many of us will never forget. Now Judy Shepard, Matthew's mother, tells us in he own words what it was like for her and how she came to become an international gay rights advocate. She writes as only a mother could and we feel her love on every page. Because of that horrible day and what Judy has done, the name Matthew Shephard is synonymous with gay rights. Before that terrible day, however, Matthew was just Judy's son. In this book Judy Shephard writes of her loss and shares her personal memories of Matthew and the family and what led to his murder and a day that changed everything for all of us. The book takes us through the days immediately after the murder. Judy and her husband flew back to American from Saudi Arabia to be with their hospitalized son who was near death and being kept alive on life support machines. We read how the Shephards heard about the tremendous outpourings from people all over the world who were holding candlelight vigils and memorial services for Matthew. She also explains how they managed to get through the legal system while Matthew's murderers stood trial. The book is a heartbreaker as was the incident itself and I found myself weeping openly as I read. It is painful to read yet it is also uplifting as she tells us how she dealt with the loss of a child. Furthermore we see what gave her the impetus to become a gay rights activist and the challenges she faced and still faces but we also learn of the rewards she has reaped not only as a gay activist but as a mother to a gay son. Matthew Shepard's death ushered in a whole new era of civil rights and all because of his death. Here we also learn of his life and about his extraordinary mother who was able to come to terms with the loss of a child and being propelled onto the world stage.
Trustpilot
Copyright © 2022 Thriftbooks.com Terms of Use | Privacy Policy | Do Not Sell My Personal Information | Cookie Preferences | Accessibility Statement
ThriftBooks® and the ThriftBooks® logo are registered trademarks of Thrift Books Global, LLC