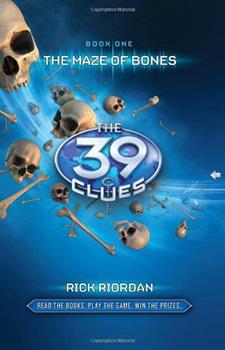 This description may be from another edition of this product. The first book in the #1 bestselling phenomenon sends readers around the world on the hunt for the 39 Clues Minutes before she died Grace Cahill changed her will, leaving her decendants an impossible...

Published by Thriftbooks.com User , 12 years ago
fun, interactive. my son enjoyed searching for clues on the web, he is looking forward to the next book!

Published by Thriftbooks.com User , 13 years ago
Got Book 1 for my 10 year old daughter. She read the entire book in days, joined the website, and talks about these a lot. She keeps asking me to get her all 39 books - she really loves this series. Previously loved the Daisy Meadows books and still likes Nancy Drew. Hope the next few in the series come out Soon. I love to encourage her reading, and this book brings in educational subjects including travel and history. We highly recommend this book.

Can't Wait For the Next Book!!!

Published by Thriftbooks.com User , 13 years ago
My son devoured this book!!! For a child that hates to read, he read the book in one weekend and exclaimed, "I can't wait for the next book!" What music to my ears!!! My son read the book, entered his trading cards on line, worked out the puzzles and had a ball!! I wish all books would thrill and excite him the way that this one did!! Kudos!!!

Nothing wrong with a smart marketing strategy

Published by Thriftbooks.com User , 13 years ago
There's already a review that is negative about this series for being a blatant marketing scheme. While I was a bit put off at first by the whole book series/trading cards, now that we've bought the book and a few card packs, I'm a huge fan. Rick Riordan's Percy Jackson series helped ignite my 10-year old son's passion for reading. He's now half-way through Maze of Bones, and thoroughly enjoying it. He's noted on the calendar the date the next book will be released. I have to admit I'm reviewing the book without having read it myself yet, but based on the number of times my son has read me excerpts, I'd say it is succeeding with the target audience. As for the trading cards, well, 10-year old boys love trading cards - Pokemon, Yu-gi-oh, and so on. These cards are different though. They have puzzles on them that the reader has to solve. They're not that tough - they seem simplistic to me as an adult - but for my son, they're challenging enough that he feels a sense of accomplishment when he solves them, but not so challenging that he's had to enlist parental help very often. The web site provides hints. We did have a problem entering one card. We sent e-mail to support and the problem was quickly fixed. I was pleased when my son noticed a clue hidden in the book. I believe the puzzles have him looking at the books much more analytically. I'm hoping (as is Scholastic) that by including different authors in the series, my son will be encouraged to read other books by these authors as well. I see this as a win-win situation. Anything that gets kids to read is OK by me. I think this is a brilliant marketing move on Scholastic's part. I try to teach my kids to be informed consumers, and understand when they are being manipulated. Everything is about branding and marketing in our culture, and here is a case where someone got it right, and is marketing a quality product in a very effective manner. Kudos to Scholastic for coming up with such a unique and engrossing series!

Published by Thriftbooks.com User , 13 years ago
I was reminded of both The Da Vinci Code and the Harry Potter books as I read Maze of Bones. First of all, it's an addictive read. Second, it is a mystery with multiple clues involving famous people, like Dan Brown's book. Last, like J.K. Rowling's famous books, it is about a group of people separated into four different branches, or houses; and about children saving the world. The plot involves the diverse, far-flung Cahill family, which has been the most powerful family in history. Anyone important in history was probably a Cahill, including Abraham Lincoln, Isaac Newton, Winston Churchill, Napoleon Bonaparte and, especially, Benjamin Franklin. The source of the Cahill's power has been lost over time. The 39 Clues is about the search for that source, by a group of Cahill relatives vying against each other to find the answer. The clues are found all over the world. Penniless orphans Amy and Dan Cahill enlist the help of their teenage au pair, Nellie, to find the solution to the mystery. The kids seem like real people, and you root for them against their mostly despicable relatives. Amy is a painfully shy, stuttering 14-year-old; Dan is a precocious 11-year-old who loves collecting things. Although they often fight, the siblings help each other during the many dangerous adventures collecting the clues. Maze of Bones is the first of 10 books in this new Scholastic series, which also has an elaborate supplemental contest where readers can try to come up with the answers to the clues themselves. The book comes with six game cards that you can use to get clues online. There are 350 cards in total, so the series is also a card-collecting game for kids. But if you just want to read Maze of Bones, it's certainly worthwhile. It's fast-paced, full of fascinating people and has an interesting mystery. I recommend it, and look forward to the second book.
Copyright © 2020 Thriftbooks.com Terms of Use | Privacy Policy | Do Not Sell My Personal Information | Accessibility Statement
ThriftBooks® and the ThriftBooks® logo are registered trademarks of Thrift Books Global, LLC