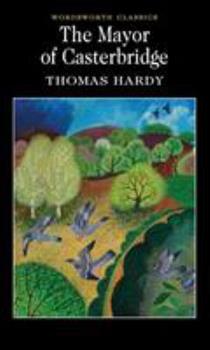 The Mayor of Casterbridge

This is with an introduction and notes by Michael Irwin, Professor of English Literature, University of Kent at Canterbury. None of the great Victorian novels is more vivid and readable than 'The Mayor of Casterbridge'. Set in the heart of Hardy's Wessex, the 'partly real, partly dream country' he founded on his native Dorset, it charts the rise and self-induced downfall of a single 'man of character'. The fast-moving and ingeniously contrived narrative...

Published by Thriftbooks.com User , 12 years ago
I do not deny that I enjoy the rather unrealistic for the real world, and campy in a very 'this is real to the people participating' way, storylines of the Harlequin Presents line. This story has the marriage for revenge plot. Simon is a writer whose sister is paralyzed in a car accident caused by a bimbo his brother-in-law was having an affair with. When he goes to investigate, he finds out that Maggie was driving the car. But it turns out, she wasn't. Her younger sister was. He sets out to get revenge on the little tramp who ruined his sister's life. He is going to get her to fall in love with him, marry her and take her off to a secluded cabin in the mountains and make her pay for what she did to his sister and her marriage. That's probably the worst plan for revenge I've ever heard. Yet this book is a great story. Maggie is of course a really good, decent woman, who would never have an affair with a married man. She's never had an affair at all. She's too busy working and trying to make ends meet and taking care of her ungrateful 'Lolita-esque' sister. In fact, she is terrified of cars ever since her mother died in a car accident and she was driving. Instead of seeing that Maggie is a good and decent human being, Simon persists in believing her to be an amoral trampy gold-digger, but finds himself attracted to her air of innocence all the same. He hires her to be his secretary to help him transcribe his book, and romances her into marriage. Poor Maggie is none the wiser until they get to Simon's little cabin in the mountains where he takes her for their honeymoon, when he reveals his true colors. He hates her guts and he wants to make her pay by making her his slave and taking her away from the glamorous world she lives in so she cannot seduce and destroy any other men. Maggie protests her innocence on deaf ears. He doesn't listen. After all this, he still expects Maggie to help him with his book, and to do all the cooking and cleaning. This is not a book that you like for the hero, clearly. I liked it for Maggie. I could sympathize with her, and I hoped she made it out of this crazy situation with her sanity intact. Of course, things change where Simon finds he wants to make her his real wife in every way. Things heat up in the bedroom, although Maggie doesn't get why she would fall in love with a crazy, cruel man like Simon. All along, Maggie is showing her true colors. That she is a good person, and she would never do what Simon has accused him of. Of course, she turns out to be a real homemaker (turning the sparsely furnished cabin into a home, cooking great meals on the antiquated stove, and taking up quilting). He sees this, but thinks it's just an act. Suddenly, the younger sister shows up, just when things sort of settle into an uneasy truce. She has decided that she wants to take her sister's husband, since he's a rich man who can keep her in style. The good news is that she is kind of dumb. She says way too much, and p

Published by Thriftbooks.com User , 13 years ago
...but without the histrionics. One of the greatest novels ever written. Also one of the most suspenseful and (for those whose palates have not been ruined by trash) one of the most enjoyable.

Published by Thriftbooks.com User , 18 years ago
I'm re-reading this book that thrilled me years ago and thrills me today. Now, however, I realize just how "modern" it is, even more so than the works of Dickens, whom I also revere, but whose writing had a quaint quality that actually makes him the lesser artist, in my opinion. Hardy's writing is spare but nothing is left out. You feel it, you taste it, you live it. It has the firm, sure quality of a minimalist work of art, and yet the twists and turns of its plot are dizzying. I detect its influence on novelist Toni Morrison, I might add. I'd be willing to bet she's a Hardy scholar. I read many passages, many scenes, that reminded me of her "folksy" conceits. And I was amazed at Hardy's contemporary understanding of addiction, in this case alcoholism. In fact, Henchard is a "dry drunk." He abstains from liquor for 21 years, but his character defects and lack of spiritual awareness catapault him right back into his disease when he begins drinking again. In fact, his life spirals out of control faster and faster with his first return to drink, showing that alcoholism, like all addictions, is a progressive disease. A reviewer here said the book was depressing, and that Hardy is dark. However, the "light" in Hardy comes with his wisdom, not unlike Faulkner's, of human nature. There are so many themes of the enduring truths that one is uplifted just by the reading. Sometimes I mourn for the writers I will never meet, the ones who have passed on. Their teaching is so important to my own spiritual and artistic growth, that I have experienced a great love from them and for them. Hardy is one of those for me. Wherever he dwells now, I send him my appreciation.

Be Careful What You Wish For?

Published by Thriftbooks.com User , 18 years ago
Since I have decided to dedicate part of my time spent reading in 2003 to the classics, I started first with The Mayor of Casterbridge, not the most famous of Hardy's works but seemingly a good place to start. I will definitely read the other works by this author since I was so captivated by this book.The novel begins with the sale of Michael Henchard's wife and child to the highest bidder at a local summer fair. Henchard is drunk and his wife, tired of his habits, decides to leave with the sailor who bids on her and her daughter. Henchard wakes up the next morning, somewhat remorseful for what he has done and vows not to drink for twenty-one years.The very next chapter picks up the story nineteen years later, with the return of the wife and child into Henchard's life. Henchard is now quite wealthy and is such an important man in his community, he is now Mayor of Casterbridge. From here, a series of wrong decisions and misunderstandings lead to the devastating conclusion.Hardy is well known for his tendency towards gloomy endings and this book certainly fits the mold. But he is also well known for his lyrical descriptions of the English countryside and describing a way of life which had disappeared even in his own time. There were beautiful passages about the hay carts being driven through town, loaded so high that people on the second floor of homes could reach out and touch the top of the hay. Small details abound, describing the sound of rain on trees and the smell of the local foods. But perhaps the most significant aspect of the novel for me was the feeling that Henchard had wished for everything that had happened to him, and all of his wishes came true, and thus ultimately his downfall. These wishes were almost all made in a rash moment, when perhaps a minute or more of reflection could have produced a clearer head. Yet Henchard lives by his instincts, since for almost twenty years they seemed to serve him well.I would recommend this book to any serious literature lover and I believe it serves as a good introduction to his other works. His books serve as a bridge from Victorian literature to modern literature, with no happy endings guaranteed.

Discovery of the Beauty of English Literature

Published by Thriftbooks.com User , 21 years ago
At first I was forced to read "The Mayor of Casterbridge" in school more than 12 years ago. Reading it slowly made an impact on my life. This book always served a special purpose in my life. It introduced me to the wide world of Literature. It sort of enlighten my interest and liking for English literature. Now re-reading it not only brought back fond memories of my yester school days but also renewed my liking to one of the greatest writer of all time Thomas Hardy.Through this novel I came to the understanding of Irony and oxymoron. Hardy totally wrote with a sense of awareness of human characteristic and he had a amazing style of mixed humour with tragedy. His protagonist,Michael Henchard's life was under the microscope of Hardy. I love the way the story began I quote:"ONE evening of late summer, before the nineteenth century had reached one-third of its span, a young man and woman, the latter carrying a child, were approaching the large village of Weydon-Priors, in Upper Wessex, on foot. " I love the Englishness and the sense of intriguing events that would follow...In brief, Michael Henchard was a drunk who sold his wife and daughter at the fair. Later he realised his mistakes he work real hard and eventually became the mayor of Casterbridge. His life took another twist 20 years later when his wife and daughter came back to his life plus a few more other characters adding on the complexity of his life.Soonafter events unfolded and many things became to go against his way and then came his downfall. Indeed Michael Henchard's rise and fall were filled with compelling details and his encounters with numerous intestering people.What I love most about this novel was the way Hardy depicted Henchard's behaviours and thoughts and totally enhanced his weak character and irresponsibleness with dashes of ironies. His sardonic literary style were brilliant and at the same time he also vividly described the scenery and situations. Another greatest of Hardy was his ability to create innovative characters still account for in modern contemporary days and he was a pioneer in analysising human's weakness and blended it into his creation. It's a vintage classic,psychoanalytic and intriguingly written ,a must read for all books lover.
Copyright © 2020 Thriftbooks.com Terms of Use | Privacy Policy | Do Not Sell My Personal Information | Accessibility Statement
ThriftBooks® and the ThriftBooks® logo are registered trademarks of Thrift Books Global, LLC