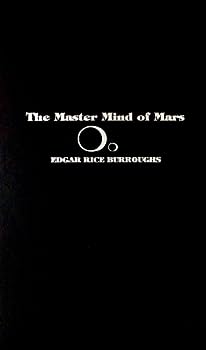 (Book #6 in the Barsoom Series)

Ulysses Paxton an American goes to Mars where he meets Ras Thavas, the greatest physician upon the planet and becomes embroiled in his grisly and amazing experiments.

And the first salute to SciFi fans

Published by Thriftbooks.com User , 12 years ago
Wounded in battle in trenches of France in WW I, our hero is called to the Red Planet. Ulysses Paxton, Captain, U.S. Army Infantry, a life long follower of the tales of John Carter of Mars, transits the void to arrive on Barsoom. He finds himself in the company of Ras Thavas, the brilliant but aging surgeon and scientist. Re-named Vad Varo, Paxton becomes the champion of a stunningly beautiful martian woman whose body has been stolen by the aging and ugly ruler of another city. Our hero vows to get the brains back into the correct bodies so he can have the girl with the looks AND the personality he loves (and give the cruel and oppresive queen her due). He finds allies, undoes injustice, fights bad guys, sneaks in, abuses the religion of a people, saves the day, gets the girl, and becomes an ally of John Carter, Warlord of Mars. All possible because he was a loyal fan of Edgar Rice Burroughs' (ERB) books. If nothing else, this book deserves kudos for recognizing fan loyalty. But there are other great aspects of this one. With Paxton, ERB was able to shift perspectives more than in other books. In this one, Mars is given a breath of fresh air, as a new set of eyes tries to describe it. ERB takes on some fairly heavy philosophy, addressing the relationships between atheism, religious fundamentalism (as demonstrated by the Phundahl...), obsessive and ammoral persuit of science, and the need for a balance between rational thought, faith, integrity, honor, sentimentality, and objectivity. His take on religious fundamentalism was insightful, thought provoking, and fairly funny. The discussion of the pursuit of science without morals was equally insightful and thought provoking but much more sober and at times disturbing. The usual Barsoomian heroic fun, but with layer of more nuanced reflection. ERB pulled it off brilliantly. E. M. Van Court

GOOD ADDITON TO A GOOD SERIES

Published by Thriftbooks.com User , 16 years ago
Again, we have pulp fiction at it's best. I gave this one five stars simply because it is Burroughs, even though it probably was not up to the standards of "Chessman" or some of the earlier works in this series. I had problems following the many, many characters when I was a young boy, and found I still had the same problem now that I am in my dotage. We do have a new character here, a fellow by the name of Baxter, so we get away from following John Carter somewhat. In a way this was good. All this series should be read and studied by SiFi and S & S Fans, as they are the basis for so much that is written today. All in all recommend this one and the entire series quite highly.

Published by Thriftbooks.com User , 18 years ago
For "The Mastermind of Mars," the sixth volume in his Martian series, Edgar Rice Burroughs introduces another new hero as American Ulysses Paxton crosses the void between Earth and Barsoom to become the chief assistant to the red planet's greatest scientist. Original published in the first "Amazing Stories Annual" in 1927, the story again begins with a letter, from Paxton, a Captain in the U.S. Army, to ERB in which he tells how he was fatally injured on a World War I battlefield and was transported to Barsoom, in the same way John Carter made the trip in "A Princess of Mars." Paxton has sent the author the manuscript, which allows Earthmen to "become better acquainted with the manners and customs of Barsoom." In what strikes me as an attempt to further explore the brain switching from previous novel, "The Chessmen of Mars," with the Kaldanes and Rykors, ERB's pulp fiction story has to do with human brain transfers performed by the title character, Ras Thavas. Early in the novel Paxton witnesses the scientist transferring the brain of Xara, Jeddara of Phundahl, in the body of a young girl. Now called Vad Varo, Paxton becomes the bodyguard and assistant to Ras Thavas in the city of Toonol, and falls in love with Valla Dia, the young girl whose mind is now in the ancient body of Xara. Our hero helps Ras Thavas transfer his brain to a younger body as well, but extracts a promise from the scientist to help restore Valla's body. Of course, just to make things interesting, Valla is the daughter of Kor San, Jeddak of Duhor, so once again ERB's damsel in distress is Barsoomian royalty (that is to say, yet another princess of Mars). The remainder of the novel follows Vad Varo's attempt to restore his beloved to her own body, which is complicated by a series of brain transplants that alternately help and hinder his effort. The brain switching angle is rather interesting, and actually makes more sense than your standard "strange alien device transfers consciousness between bodies" that we usually find in such science fiction stories (I just saw that on an old "Farscape" episode), but "The Master,ind of Mars" is pretty much an ERB potboiler where everything is resolved in the final chapter. The novel also has his standard indictment of the futility of war and a rather humorous little attack on false religions, as well as a rather confusing roster of characters. After the classic "Chessman" this next Martian yarn is a bit of a disappointment, but it is still at least an average offering in what is ERB's best series.

Published by Thriftbooks.com User , 21 years ago
"The Master Mind of Mars" by ERB is a great book! ERB's Mars series takes second fiddle to his Tarzan books, but I respectfully argue they are superior. In "MMM", Ulysses Paxton, a critically wounded WWI soldier, is astral-projected (plot device to get things moving) to fabled Barsoom (Mars), dying planet of canals, hordes of 4-armed green warriors, scantily clad women, strong warriors wearing only their "sword and harness", and home of Ras Thavas, the Master Mind of Mars. It seems that Ras Thavas has an enormous talent - only he, among all the inhabitants of Barsoom, is able to perform the life-extending brain transplant. (Or maybe we should call it, ominously, the brain exchange. Too bad for the young body donor whose brain is unceremoniously evicted for the old, rich plutocrats...) However, now Ras Thavas is growing old and he needs his own brain transplanted. Who to train in the procedure? Why, none other than Ulysses Paxton (now called Vad Varo). But our hero turns out to have ethics and morals, and not only that, has fallen in love with a beautiful girl. Unfortunately, she is a body donor for a rich old hag. What happens next? Ulysses, the girl, and some sidekicks go off on a tour of Mars to reunite young girl brain with young girl body! On their Grand Tour of Barsoom, they come to various cities, each with different religious doctrine (I think ERB is indulging in a little gentle satire here). Take it as a given in pulp fiction that our heroes are successful and all ends well. Great enjoyable escapist reading. I found out later on as a veterinarian that it's a little tougher to do brain transplants than described in the book. (Maybe I just needed the super-healing elixir...)

Published by Thriftbooks.com User , 21 years ago
Number 6 in Edgar Rice Burrough's Mars series features a new character, Ulysses Paxton, a critically injured World War I soldier given new life on Mars. He awakens in the laboratory of Ras Thavas, Mars' resident expert in body transference. Fun to see another newcomer to Mars tackle it's unique problems in entertaining plot. Story doesn't let up, is fairly short and in the classic save-the-girl Burrough's mold. Recommended.
Copyright © 2020 Thriftbooks.com Terms of Use | Privacy Policy | Do Not Sell My Personal Information | Accessibility Statement
ThriftBooks® and the ThriftBooks® logo are registered trademarks of Thrift Books Global, LLC