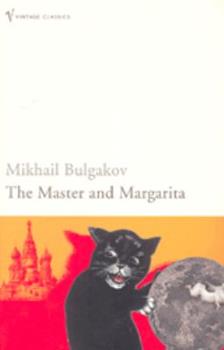 The Master and Margarita

This description may be from another edition of this product. A 50th-anniversary Deluxe Edition of the incomparable 20th-century masterpiece of satire and fantasy, in a newly revised version of the acclaimed Pevear and Volokhonsky translation Nothing in the...

Published by Thriftbooks.com User , 18 years ago
I've always been a fan of Russian novels, ever since I read my first Dostoevsky novel at the age of 10...(okay, it was a Classics Illustrated comic book version of Crime and Punishment!)but had never run across anything by Bulgakov until a few years ago. A Russian friend of mine really pressed me to read the book. I bought it, but it just stayed on the shelf until a few weeks ago. All I can say is, I didn't know what I was missing. Master and Margarita is a wickedly funny, sad, frightening, and ultimately haunting masterpiece of fiction. Bulgakov was one of the first generation of Soviet writers who flourished in the 20s, during the short lived Soviet Experimental movement, and then suffered horribly after the stregnthening of Stalin's regime. Bugakov was primarily a man of the Theater, and something of a theatrical quality hangs on to this book. The chapters have an almost tableaux style construction. When the Stalinist purges began, Bulgakov was began work on Master and Margarita, pretty much to please himself. He knew that he would never live to see it published. The novel itself is nearly impossible to describe. It consists of three separate plots. On the surface is the visit to Moscow, of the Devil in the guise of a professor named Woland, and his henchmen, two grotesque disfigured men, a naked woman and a cat who plays chess among other things. The group proceeds to essentially terrorize the city's intellectual community, mostly by exposing each character's inner hypocracy. The satire of communist society in this section is quite biting, and uproariously funny. Embedded in this story is a "novel within a novel" ...the story of Pontius Pilate and his encounter with the itinerant spiritual man, Yeshua. Finally, there is the story of the separated lovers, the Master and Margarita, who interweave between the other two stories. They live in the present day Moscow, but the Master ostensibly wrote the manuscript which told the story of Pontius Pilate. This rich and complicated stew of a book works on so many different levels. At it's most obvious, it is a scathing attack on communism and the cultural elite's complicity with the evils of the system. It is also rather pitiless in it's exposure of the greed, corruption and mendacity of human nature. But Bulgakov is not a conventional moralist. The Devil as Woland is an evil figure...sometimes a terrifying figure, and yet he ends up as the instrument of the redemption of both the Master and Margarita. There is a deep spiritual viewpoint at work here...Early in the novel, Yeshua tells Pilate that, "all men are good", to Pilate's incredulity. In the context of the novel, Yeshua seems hopelessly naive, but by the end of the novel, you wonder if this may actually not be the author's central point. Even the devil is capable of some good here. This book contains a whole world. Characters change in dizzying fasion and events go by with lightening speed. And yet, by the last pages there is a haunting beauty,

Published by Thriftbooks.com User , 21 years ago
I suppose that I can start by saying that "The Master and Margarita" has been my favorite book for over 7 years now (that says a lot since I read quite a bit!). I don't think it is necessary to discuss the plot of the book, since you can read what the book is about by looking at the editorial reviews. However, I will comment on the various translations. Without a doubt, the book in the original Russian is incomparable, but if you don't read Russian I would recommend the Burgin/Tiernan O'Connor translation. The first translation I ever read was Mirra Ginsburg's - although it is very charming and enjoyable, certain bits of conversation as well as almost an entire chapter are omitted from this translation. I have also read parts of Michael Glenny's translation, and I don't feel that his translation accurately relays the depth, rhythm and richness of Bulgakov's style. Burgin/Tiernan O'Connor has given the most complete and accurate translation of this work. Another superb feature of this translation is the commentary section at the end of the text, which is very helpful in understanding what influenced Bulgakov, and is especially helpful if the reader is not familiar with certain aspects of Soviet culture while the book was written (during the 1930's).Lastly, I have to comment on the thing that I love most about "The Master and Margarita" - it is impossible to classify this book as one certain genre. This book is a philosophical and religious novel, an historical novel, a satire, a love story, an action/adventure, and a fantasy all rolled into one. Simply put, it is timeless - an original, brilliant and beautiful novel.

ABSOLUTELY ONE OF A KIND

Published by Thriftbooks.com User , 21 years ago
This extraordinary and unique book opens in 1930s Moscow during the darkest period of Stalin's repressive reign. Near Patriarch Ponds, two writers sit on a bench engaged in a discussion regarding the nature of Jesus. True to their times, both writers devoutly discount his existence. As their discourse continues, they are joined by a third man, a well-dressed stranger who claims not only to believe in the existence of the historical Jesus, but to have actually been present at Jesus's trial and crucifixion. Unbeknownst to the two writers, this stranger is none other than Satan, himself, who is now calling himself Woland. The next chapter takes us to Yershalaim (Jerusalem) and Pontius Pilate's interrogation of Yeshua Ha-Nozri (Jesus). Much to Pilate's dismay, Yeshua freely admits to all of the charges brought against him. Pilate, although finding himself captivated by Yeshua and desiring to free him, has no choice but to order his execution instead. Yeshua is sentenced to death and crucified and Pilate grows more and more disturbed. Back in Moscow, things have taken a bizarre turn. When Woland's prediction of the death of the writer Berlioz turns out to be true, another writer, Ivan the Homeless is unceremoniously carted off to an asylum and the esteemed Dr. Stravinsky. As heads roll and people are driven mad, Ivan meets his neighbor in the asylum, one known only as The Master. The Master, also a writer, has been working on a novel centering on Pontius Pilate and the story, not coincidentally, is more than similar to Woland's eyewitness version. Ivan also learns of The Master's love for the beautiful Margarita with whom he shared both an apartment and an affair until the rejection of his novel drove him insane. Margarita, meanwhile, is living in a loveless marriage and spends her days pining away for her lost Master, knowing nothing of his whereabouts. The story then moves back to Yershalaim and Pilate's struggle to come to terms with the death of Yeshua. He is visited by Matthew Levi and subsequently orders the death of Judas of Kiriath (Judas Iscariot) for his betryal of Yeshua. Moving back to Moscow again, we learn the reason for Woland's visit. He wants to give a Grand Ball and is in search of a hostess--a hostess named Margarita. Margarita instantly agrees and the Grand Ball proceeds, apparently lasting for hours and hours with the guests having been chosen from among the most sinful and corrupt of all the deceased. With the dawning of the new day, Woland, who is pleased with Margarita's performance, tells her he will grant her her fondest wish. Of course, that wish is to be reunited with The Master. How this request is accomplished is one of the most extremely inventive passages in all of literature and involves not only Woland, but his wily accomplices (Azazello and Behemoth), Matthew Levi and Pilate, himself. Suffice it to say, all turns out well for all intended and The Master and

A masterpiece, but choose a right translation?

Published by Thriftbooks.com User , 21 years ago
I am Russian, and have read this novel (which is my favorite Russian novel), in Russian. However, for some reason, a week ago I decided to look through Michael Glenny's translation of this novel and I was shocked by the various little mistakes in the text. In the very first dialog, one of the main characters asks for a glass of Narzan (which is a famous brand of mineral water in Russia), which M.Glenny translates as lemonade. Close, but no cigar...And it goes further like this. That leads me to believe that the translator probably was not familiar with nuances of Russian language, or may be simply didn't care. Nevertheless, I know that it had been the only one English translation available since 1967 and thanks Mr.Glenny for that. Now we have Mirra Ginsburg's more accurate translation (I have checked), which makes me happy. The novel is truly fascinating. A really remarkable person wrote it. Bulgakov was a doctor by profession, he received an exellent education in the pre-Revolutionary Russia and lived through the horrors and turmoil of the Revolution of 1917 and the Civil war. This is a wonderful satire on Communism and a biblical story. This novel populated by very interesting characters, one of them is "unknown visitor" Woland, who is the Satan visiting Moscow with his entourage. Woland is a complex figure, a diabolical seducer, father of lies - the Devil himself, but also "he, who has brought the light" - Lucifer. He laughs at the Soviet Communists, who mistakenly think that they have rooted out all evil and have build a society which is even beyond the good and evil. In the clash with Woland they watch how the "perfect" and godless society crumbles down. Please read it, and you will enjoy it, because the novel goes beyond Russian culture to the world of archetypal characters and events that have meaning to all humans.
Copyright © 2020 Thriftbooks.com Terms of Use | Privacy Policy | Do Not Sell My Personal Information | Accessibility Statement
ThriftBooks® and the ThriftBooks® logo are registered trademarks of Thrift Books Global, LLC