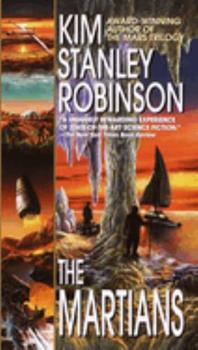 Kim Stanley Robinson's Mars trilogy is one of science fiction's most honored stories, with Red Mars winning the distinguished Nebula Award, and both Green Mars and Blue Mars honored with the Hugo. Now Robinson returns to the realm he has made his own--the planet Mars--in a brilliantly imagined drama with a searing poetic vision. From a training mission in Antarctica to blistering sandstorms sweeping through labyrinths of barren canyons, the interwoven...

A mixed bag, but some worthwhile stuff inside

Published by Thriftbooks.com User , 17 years ago
On the odd chance that you've come here by accident, let me open up by saying that Kim Stanley Robinson's Mars trilogy (consisting of Red Mars, Green Mars and Blue Mars) remains one of the greatest SF epics of all time, managing to combine a grand scope with highly emotional storytelling and a riveting plot, as well as a overarching concern for environmental issues. If you haven't read it, go out and buy all three books right now, because otherwise this book here will hold absolutely no interest for you at all. After he finished the trilogy Robinson apparently had some leftover thoughts and supplementary material he thought worthy of publishing and so this book is a collection of short stories and other pieces all relating to that great trilogy. The only thing is that a lot of this is hit and miss, with decent stories sitting next to somewhat useless pieces. The biggest problem here is for people like me who read the Mars trilogy years ago (about seven years ago, I think) and a lot of the better stories make references to events that happened in the novels themselves. And while this doesn't ruin the stories, the shorter stories lose some of their resonance because the reader doesn't grasp the whole context and people who have never read the novels will be totally lost. But a good majority of the meatier stories stand up quite well on their own (I like the baseball one, the original "Green Mars" story was neat, and a lot of the viginettes involving Coyote was well done) and make for quick, enjoyable reads that take the reader back to the glories of the trilogy. But a lot of the other stuff is just Robinson clearing out his notebook . . . a draft of the Martian constitution (followed by someone's notes on it), a brief piece with abstracts from Martian scientific journals, a long section with various poems of varying quality and a series of one or two page stories that just sort of sit there without really doing anything. But, as I said, the best stuff here reminds us why we loved the original trilogy in the first place (and almost made me want to go back and read it again) and you can just skim past the so-so stuff and move on. You may be doing more skimming than you might like, but there are some gems buried in here. If anything deserved a buyer beware, this would probably be it . . . the best time to read this is right after you finish the original trilogy so that most of this makes sense and you can extend the marvelous glow of the novels just a little bit longer. But for those looking for Robinson's best work, I'd go for the Orange County Trilogy and some of his other novels, that's where his genius really lies, while a book like this merely only shows you some aspects of it. I got this as a bargain book and that's probably the price you want to pay for it, anything more and you're going to feel ripped off. And I'll say this just one more time . . . go read the Mars trilogy! I can't put it any clearer than that.

Published by Thriftbooks.com User , 21 years ago
I was so thrilled when there was MORE to the Trilogy. This isn't all short stories (many countries would do well to study the Martian Constitution), but it's all written with the same attention to detail and realism that KSR brought to the Trilogy. Parts of it read almost like a historical text, and that's exactly the feeling I think you should get from it.

Wonderful companion to the trilogy

Published by Thriftbooks.com User , 22 years ago
I found this collection of short stories and poetry added a lot of depth not only to the Martian Trilogy, but also to the readers understanding of Kim Stanley Robinson. It seemed to me that this book was a way of showing the readers what Robinson was feeling as he wrote and lived the Mars Trilogy. It was as if he added to his stories by saying "this is me, reader. Understand where I am coming from." Being a huge fan of the trilogy, I was very pleased by the stories in this collection, as well as the insights into Robinson's personal character. Overall a perfect ending to the Mars story line.

A treat for Robinson fans

Published by Thriftbooks.com User , 22 years ago
A great companion to the mars colonization and terraforming series by Kim Stanley RobinsonThe man has a rare talent for taking a topic and setting which has been beaten like a rented mule for decades and somehow making it fresh and mesmerizingAnother favorite author of mine, Steven Edward Rustad, in 'The Triumph and the Glory' accomplished the same thing for the Second World WarFresh perspectives. Uplifting themes. Rare these days, huh ?We need more writers like those guys, any volunteers out there ?

Terrific. A real pleasure to read.

Published by Thriftbooks.com User , 22 years ago
The author was extremely insightful
Copyright © 2020 Thriftbooks.com Terms of Use | Privacy Policy | Do Not Sell My Personal Information | Accessibility Statement
ThriftBooks® and the ThriftBooks® logo are registered trademarks of Thrift Books Global, LLC