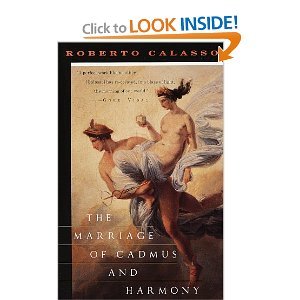 The Marriage of Cadmus and Harmony

This description may be from another edition of this product. Presenting the stories of Zeus and Europa, Theseus and Ariadne, the birth of Athens and the fall of Troy, in all their variants, Calasso also uncovers the distant origins of secrets and tragedy,...

Published by Thriftbooks.com User , 20 years ago
"The Marriage of Cadmus and Harmony," is a marvelous retelling of the Greek myths that puts a trace on their source, and a track on their permutations. More importantly Roberto Calasso explores their ramifications on modern times. And, he does it in a scholarly and entertaining way that never pulls us from the full world of ancient Greece that he recreates. Oh, those gods and goddesses were steeped in gore, and would wreck whatever havoc was necessary to have their ways with humanity and each other. The blood of every hero seems to begin with a sanctified seduction or rape, and end in a pool either before the gates of Troy, or as a result of that ten year war. Not to say that the humans act or fare any better than their divine counterparts. The greatest among them were small in their motives as they pursued homicide, parricide, matricide, infanticide and every other side of slaughter they could summon into being. But, as small as they were, they were heroes; and, as petty as they were, they were the gods; and their actions, reactions, and inactions shaped and continue to shape Western culture. "The Marriage of Cadmus and Harmony" is a fitting companion piece to "The Iliad" and "The Odyssey," and stands alone as a thrilling tale of the mortal and immortal excesses that have formed us.

A intense discovery of our fabulous past

Published by Thriftbooks.com User , 22 years ago
This is a poem camouflaged as prose. An eye opener. You don't read the book, the book reads into you and, after a few pages to find the right keys, it starts using your words, describing your feelings. I have read this book 4 or 5 times, and I will read it again. It is like listening to a piece of music that fascinates you. Every time you read it, it gives you something more, something new, something you missed and were waiting to find. Amazing. I am glad I came across this book

An unforgettable masterpiece in the eyes of a teenager.

Published by Thriftbooks.com User , 22 years ago
I first saw this book, very thick, one year ago, poking out of some shelf at my school's library. 'Greek myth, huh?' I was up for the challenge. I guess I knew the stories well, but the brilliant narrative and style was so absorbing, I was hooked. Calasso re-opened my eyes to the World of Greek myth! I can't remember how many times I went back to take this book out- more then five, as far as I know. What I enjoyed about it most was how each of the characters was brought to life, each with thoughts, and fears, and desires not unlike that of mankind today. The first time I finished this book I felt Calasso had altered my life, or my perspective on it. I had to go back and read it again, and again. Simply a work of art, this is a treasure of wealth in the form of written knowledge. And, personally, I don't care who you are or where you are form, just read this book. You'll see what I mean.

Calasso stitches together the stories of ancient Greece.

Published by Thriftbooks.com User , 23 years ago
This breathtaking analysis of the core of Western thought spans mythology and reality, interpretation and metamorphosis. We see the primary characters seen through different versions of their stories, applied to the different needs of the culture and finally pull back to see the evolution of that need dissolve into mere fascination. A glorious book, I've read it three times!However, I strongly suggest that readers should have a fair background in Greek mythology before tackling this book.

A life-changing work of genius

Published by Thriftbooks.com User , 24 years ago
Roberto Calasso's retelling of the myths of antiquity is as powerful and life-changing a book as I've ever read. He illuminates these stories and brings them to life, showing us the power they held for the ancients by infusing them with his own narrative power, writing in a style which is crisp, modern, and yet full of fantasy. We see our own lives in the lives of the gods and the lives of the humans with whom they spoke, made love, made war. This book would be worth reading simply for the engaging way in which Calasso tells the stories. He doesn't stop there, however. His insights and interpretations are worth a book in themselves. Nearly every page of my copy is filled with checks and underlined passages, each representing ideas which provoked thought or simply struck me as brilliant. This book is not another dictionary of myths in the style of Bullfinch and Hamilton and Graves--it is a work of literature in its own right, and, I believe, a work of genius. If you are interested in classical mythology, read this book. If you are not, read this book. It is for anyone who wants to see the world in a different, richer way.
Copyright © 2020 Thriftbooks.com Terms of Use | Privacy Policy | Do Not Sell My Personal Information | Accessibility Statement
ThriftBooks® and the ThriftBooks® logo are registered trademarks of Thrift Books Global, LLC