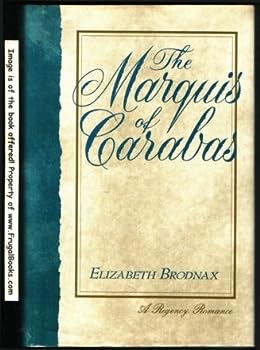 A novel of suspense set in England. This description may be from another edition of this product.

The Marquis of Carabas by Elizabeth Brodnax (Large Print Hardcover)

Published by Thriftbooks.com User , 15 years ago
Description from the book back cover: The Marquis of Carabas arrived in England, from his native Venice, to open arms - people eager to embrace him as a patriot. Little do they know that he is not at all who he says he is. Neither is his daughter, Catherine, the marchesa, who has convinced the aristocracy that the di Carabas family are nobility fleeing from political persecution. Catherin came looking for a husband, but she did not expect to fall in love. Meeting Alex Carrock, the most suspicious of all her new acquaintances, put a twist in her carefully planned plot. After all, Cat was loyal to her father and had managed to fool all the rest. This was the best hoax of their careers! Based on the old tale of Puss in Boots, this delightful new story will be a favorite with those who love fairy tales. Elizabeth Brodnax was introduced to the Regency genre by her British grandmother. This is her first novel.
Trustpilot
Copyright © 2022 Thriftbooks.com Terms of Use | Privacy Policy | Do Not Sell My Personal Information | Accessibility Statement
ThriftBooks® and the ThriftBooks® logo are registered trademarks of Thrift Books Global, LLC