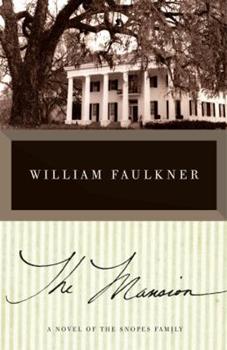 (Book #3 in the The Snopes Trilogy Series)

The Mansion completes Faulkner's great trilogy of the Snopes family in the mythical county of Yoknapatawpha, Mississippi, which also includes The Hamlet and The Town . Beginning with the murder of Jack Houston, and ending with the murder of Flem Snopes, it traces the downfall of this indomitable post-bellum family, who managed to seize control of the town of Jefferson within a generation.

Published by Thriftbooks.com User , 12 years ago
Reading The Mansion reminded me of reading Greek tragedy: I was witnessing the struggle of good and evil played out between godlike characters on a whole other plane of existence, and they all get what they deserve. Anyway, Mink Snopes's patient toiling in the first section is the best slow burns in American literature.

the end of a wonderful trilogy

Published by Thriftbooks.com User , 16 years ago
"the mansion" is faulkner's memorable conclusion to the excellent snopes trilogy. Although it can be read on its own, it is best appreciated as the third in a series. Let me first start by commenting on the trilogy as a whole (you can see my reviews on the first two books). This trilogy provides excellent overall background to all the novels of faulkner. In it he talks about most of the main characters of yoknapatawpha county, mississippi which run through all of his work. "The mansion" in particular ties many of these people and history together. In addition to that, it tells the fascinating story of the snopes family. In "the mansion" faulkner retells most of what has occurred in the prior two books. This allows the reader to enjoy this novel on its own. For the trilogy reader he makes it interesting by changing the point of view. In "the town" v. k. ratliff tells the story of mink snopes and his murder of jack houston. In the retelling in "the mansion" the story is told by mink himself; a totally different perspective. Faulkner also, in sections of the book, reverts back to the omniscient narrator in this book whereas in "the town" 3 individuals tell the story from their perspective. point of view is one of the most intriguing aspects of faulkner's style. In this novel, he concludes the stories of the main snopes' characters and other characters in the trilogy. There is a clear air of fate that doesn't appear in the other novels. The story centers on mink, linda, and flem. Each ones destiny is irreversible. Even gavin stevens is fated to become a co-conspirator in murder. As before, we never see into the head of the main character, flem snopes. He has clearly become bored with life as he defeated everyone in his way to becoming the most powerful person in jefferson. Why, at the end he takes no steps to save himself from mink is described by ratliff like rules of the game he has been playing. Is he also bored with life? Faulkner is a masterful writer. This trilogy is not his best work, but it is excellent literature.

A fascinating portrait of the deep South

Published by Thriftbooks.com User , 20 years ago
This book (The Mansion) was my first experience with William Faulkner. I plan to read more. Despite his tendency towards long sentences that are impossible to parse, Faulkner has created an extremely compelling story chronicling 40 years in the history of a family and a town in the deep South. Having been raised in the South (although certainly long after the setting of these events), I found many of the characters, and certainly some of the attitudes towards the rest of the world, eerily familiar.This epic of the rise and fall of the Snopes family illustrates the tremendous impact a single family can have on a community, especially when that family is driven by naked ambition. In the course of his narrative Faulkner also reveals how the inhabitants of a small town in the South viewed such events as World Wars I and II, the New Deal, and the beginnings of the Civil Rights movement.Although this book is the last of a trilogy, I found it to stand on its own very well. In fact, the first chapter stands on its own and is worth reading all by itself - in my view it's a near-perfectly constructed short story.

Faulkner ends the Snopes trilogy on an epic level

Published by Thriftbooks.com User , 22 years ago
This book makes slogging through The Town very much worth it. Although the Town is an excellent book, it serves mostly to set the groundwork (whether he intended it or not) for this absolutely fabulous text.Mink Snopes, cousin of Flem Snopes as well as victim of his kinsman's steady rise to the top of Yoknapatawpha County's high society, returns from prison to seek revenge. It is described in almost mythic prose. Also, causing Flem no small amount of grief, is his daughter's continuing relationship with anti-Snopesian, Gavin Stevens. Along the way, several dozen Snopeses come and go. And we learn the final fate of the Compsons from the Sound and the Fury.It sounds like a hoity-toity soap opera, but this is one soap opera that will stick to the ribs of your soul.
Trustpilot
Copyright © 2022 Thriftbooks.com Terms of Use | Privacy Policy | Do Not Sell My Personal Information | Accessibility Statement
ThriftBooks® and the ThriftBooks® logo are registered trademarks of Thrift Books Global, LLC