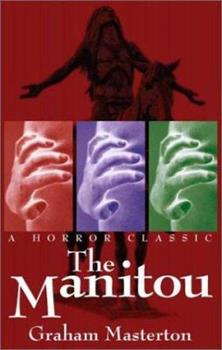 It only grows at night. Karen Tandy is a sweet and unassuming girl until she discovers the mysterious lump growing underneath her skin. As the doctors and specialists puzzle over the growth, Karen's personality drastically begins to change. The doctors decide there is only one thing to do, cut out the lump. But then it moves! Now a chain reaction has begun and everyone who comes in contact with Karen understands the very depths of terror. Her body...

This is a must read scary book

Published by Thriftbooks.com User , 4 years ago
I read this book as a teenager, and I have to say, here I am 35 years later, trying to track it down. As things go, I don't like devil books or horror stories, but this is well written, and I enjoyed it a lot. You won't be sorry you read it.

Published by Thriftbooks.com User , 14 years ago
This here's a very fun horror classic. Written in the mid 70s and a wee bit Lovecraftian, it's chock full of un-PC-ness as endless bourbon drinking, smoking cigerettes in the hospital, women mostly judged on their looks, Red Skin Indians, and Negros. Tho, none of the un-PC-ness is in any way mean spirited, it's just from a different time. The prose is clear, clean and direct. The supernatural story is action packed, effective and fun. Recommended.

Published by Thriftbooks.com User , 16 years ago
THE MANITOU is a true horror classic that still stands up despite multiple readings and over 25 years of time thanks to Masterton's sense of mood and his wonderful wit. Although the novel is filled with chilling and gory scenes, it's our hero Harry Erskine's terrific charm that keeps us speeding along through the story. Watching as a resurrected medicine man is about to born from the neck of a comatose woman, Harry handles the situation with black humor and an unstoppable drive to see the woman saved. Masterton's original ending (as it was presented in the first edition) is much different and much weaker, included here as a bonus. I hear tell that there's a fourth Manitou novel on the way...following two other sequels REVENGE OF THE MANITOU and BURIAL. I, for one, can't wait!

Published by Thriftbooks.com User , 17 years ago
As his first book this was pretty good. The fact that something is growing in you is downright sickening, but Masterton always finds a way to make it worth your time to read it. The movie is strange but the book is better. I recommened this book to all horror fans. Be careful, it is a little disturbing at times.

Published by Thriftbooks.com User , 19 years ago
This is Masterton's first, and still one of his best. Masterton has an absolute gift for selling the preposterous, and making it entirely believable. He does so through dialogue and characterization, and I've never seen anyone do it better.Karen Tandy visits her old boyfriend Harry Erskine, occult mavin and low-budget tarot reader to wealthy old ladies, because of a unique problem she's developed - a tumor on her neck, which to all intents and purposes appears to be a fetus. The doctors seem unable to remove it, and Harry starts experiencing paranormal disturbances after Karen comes to him for help. He, and a few initially skeptical doctors, reluctantly come to the conclusion that Karen Tandy is harboring the fetus of a powerful centuries-old medicine man about to be reborn - whose birth would first claim the life of Karen, and after, the entire white race, with his vengeful sorcery. What's modern science to do, against such a supernatural adversary? Why, fight fire with fire, of course - get another medicine man.It's absolutely amazing that this piece works, but it's really great. Masterton never cracks a smile (until the very end), playing the situation up for real and sucking you into it so you believe it. The characters are fabulous, especially Karen, Harry - who appeared in the semi-sequel, The Djinn - and John Singing Rock, the rival medicine man to the rescue.Masterton's stories almost always end on a lighter note, with the deliberate inclusion of a solution that is almost a joke, but the technique works because he's cluing his audience in to the fact that he realizes how silly it all is - he just wanted to show you he could make you believe it - and the concluding laughter he provokes is welcome and sympathetic, not denigrating the finely written novel at all.The all-star movie made from this book in the late-'70s is worth a look. It's a faithful adaptation, though it doesn't work quite as well as the book due to some severe special effects deficits and a crummy musical score.

One of the best scary books I've ever read

Published by Thriftbooks.com User , 22 years ago
Not being a paranormal fan, my father gave me the book when I was 12. I started reading it with a wish it would end soon. Suddenly, it turned out to be the book I've read in less time and has captivated me the most. What would you do, if you were to give life to an Indian from 600 years ago? But most, how would you fight with a warlock that has reincarnated to destroy the white race. Only a spirit as powerful will be alble to destroy it.
Copyright © 2020 Thriftbooks.com Terms of Use | Privacy Policy | Do Not Sell My Personal Information | Accessibility Statement
ThriftBooks® and the ThriftBooks® logo are registered trademarks of Thrift Books Global, LLC