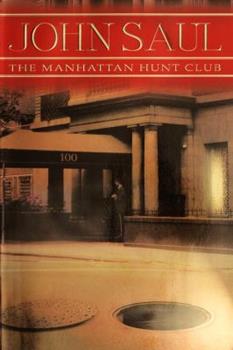 The acknowledged master of psychological suspense and heart-stopping terror, New York Times bestselling author John Saul now invites you to descend to chilling new depths of darkness--and discover a secret, savage world that exists beneath our very feet. The promising future of New York City college student Jeff Converse has suddenly been shattered by a nightmarish turn of events. Falsely convicted of a brutal crime, Jeff sees his life vanishing before...

Published by Thriftbooks.com User , 19 years ago
In "The Manhattan Hunt Club", John Saul weaves a frightening tale of underground Manhattan... After being wrongfully accused for a crime he didn't commit, Jeff Converse's world was turned upside down in a matter of seconds. But on his transport to prison, an "accident" happens and he is thrust from the police van by strangers that claim to want to help him escape. So without much time to think about the consequence of his actions, Jeff Converse chooses to follow his rescuers deep into the subway tunnels of underground Manhattan where the homeless (or rather, "houseless") now take shelter. But little does he know that he is about to become prey inside this labyrinth of caverns and chambers as he struggles to find his way to the surface before the hunters (which also happen to be guarding all possible escape routes) can kill and then claim him as their prize. And just to warn you ahead of time: Once you reach Chapter 31, the storyline takes a huge plot twist as the character's reveal their true nature and the book title suddenly becomes crystal clear... John Saul is quickly becoming one of my all-time favorite writers when it comes to suspense and horror. And while I find "The Right Hand Of Evil" to be slightly better, it's hard to compare the two of them for they're completely different. I find "The Manhattan Hunt Club" to be a very entertaining thriller that (for once!) doesn't have those dull, page flipping moments in between! This is highly recommended. MoonGoddess

This Book Needs To Be A MOVIE!!!

Published by Thriftbooks.com User , 19 years ago
This has been one of the best books I've ever read hands down. In this book expect the unexpected. I've missed hourse of sleep staying up late late reading this. I just couldn't put it down, it was full of suspense, and fear(just imagining how Jeff Converse felt in the pitch blackness of the underground Labrynth). I also couldn't help but to wander if something like this could actually happen. I would love to see an adaption of this for the big screen. Maybe so! Bottom line: bored? wanna read a book to fill-in empty time, read The Manhattan Hunt Club, unless..you're scared...

Edge of your seat thriller.

Published by Thriftbooks.com User , 19 years ago
I could not put this book down. It was one of the best page turners I have ever read. The last few books Saul wrote left a bad taste in my mouth but this one was wonderful. From the one-hundred members of the 'Hundred Club' in New York City, a handful form 'The Manhattan Hunt Club'. They turn known criminals loose in the subway tunnels under the city and then hunt them down. They make a mistake when they, unknowingly, choose an innocent man for their 'hunt'. Very entertaining and thought provoking.

"Really makes you want to come up for breath!! Chilling!"

Published by Thriftbooks.com User , 19 years ago
John Saul is a consumate storyteller, and a fine craftsman, which he's proven once again with THE MANHATTAN HUNT CLUB! This one takes you into the underground tunnels beneath Manhattan - a gripping story of evil, revenge and madness. A hellofa read! I stayed up until 3:00 a.m. to finish it. I'm a big John Saul fan, but I think he might have surpassed himself this time. Along with the thrills and chills, it makes you think. I doubt anyone who reads THE MANHATTAN HUNT CLUB will find it quite so easy to pass that next homeless person they see without at least a twinge of conscience. Or perhaps even unease...

Published by Thriftbooks.com User , 20 years ago
In "The Manhattan Hunt Club," John Saul has gone into new territory both with the geographic setting of the novel and his literary reach. MHC will attract and inspire new fans because of its well told mystery appeal and it's almost cinema-like action and characters. This compelling book explores the life under New York City in the tunnels, air ducts, subways and crevices that are the residences of thousands of homeless in New York City. MHC brings home a strong social message that the much heralded triumph over homeless people has literally been pushed underground. Mayor Rudy "Combover" Guliani cannot be pleased at the flurry of media attention MHC is likely to inspire underneath his backyard.Any Saul fan will cherish this tale, yet this is a perfect place to start for those who have never been taken on one of Saul's amazing rides.
Copyright © 2020 Thriftbooks.com Terms of Use | Privacy Policy | Do Not Sell My Personal Information | Accessibility Statement
ThriftBooks® and the ThriftBooks® logo are registered trademarks of Thrift Books Global, LLC