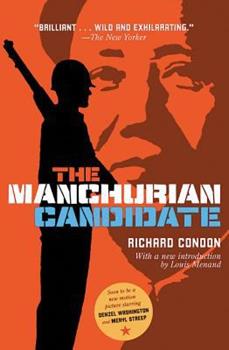 Everyone knows the controversial 1962 film of The Manchurian Candidate starring Frank Sinatra and Angela Lansbury, even though it was taken out of circulation for 25 years after JFK's assassination. Equally controversial on publication, and just as timely today, is Richard Condon's original novel. First published in 1959, The Manchurian Candidate is Condon's riveting take on a little-known corner of the cold war, the almost sci-fi concept of American...

Published by Thriftbooks.com User , 17 years ago
Richard Condon's extraordinary novel about political upheavals, assassinations, and Communist meddling is probably one of the best politically based fiction books ever. The story is about a man named Raymond and how, for political gain, he is mind washed into becoming a top political assassin. That is mere formality, for this story is already well known. Now, this story is more known for the movie versions, original and re-make; however, as is often the case the book is even grander then the films. I was enchanted by this story, as it still has at least some cultural relevance, (especially for those who lived during the assassinations of JFK and his brother RFK.) In short, Condon directs us to look at more then just the crazy political system, but the whole wacky world. Thus, this is why the book is such a classic, and deserves and should be read by all.

Published by Thriftbooks.com User , 19 years ago
Why this book is out of print is a mystery. Track down a used copy or join a nearby library that has one. You won't be disappointed. Richard Condon delivers a masterpiece of political and psychological horror, inspired by the ridiculous heights of the Cold War and the scourge of McCarthyism. The book's tragic protagonist, Raymond Shaw, was a soldier in the Korean War. He was captured by the Chinese and hypnotized and made into a programmable assassin. But the most shocking aspects of the novel are not the brainwashing, but who truly sponsored it and whom Raymond is ultimately destined to assassinate. The intrigue and curve-ball plot of this book send the mind reeling, as poor Raymond is relentlessly manipulated by those who use him, while those who want to save him deal with insurmountable obstacles. For a book written in 1959 it is surprisingly harsh, with nasty political diatribes from Condon along with prostitution, hard drug use, incest, and also a level of sexism that seems over the top today. The most obvious example of that last issue is Raymond's incredibly loathsome mother, whose evil amply propels the story; but she is sometimes a little difficult to believe in her sheer evil megalomania. But other than that, for a political thriller that is impossible to put down, you can't do much better than this classic, and the finale is truly shocking and heartbreaking. This one is well worth tracking down.

McCarthyism, Cold War evils, and a mother from hell...

Published by Thriftbooks.com User , 20 years ago
For a person who does not like your Cold War spy novels I must admit that The Manchurian Candidate by Richard Condon is one of those rare books I consider to be simply brilliant. It is concise, very well-written, and has a story which is absolutely incredible (well okay, by today's standards it might be considered a bit over-the-top).In The Manchurian Candidate we have a US platoon in Korea (during the war) captured by Chinese/Russian scientists who brainwash them. One sargeant in particular is targetted to be their assassin on demand after the war. This fellow happens to have a power-hungry mother (..to be kind; she is truly vile) and her bozo husband who is modelled after the commie-hating Senator McCarthy. From here the story gets more complex and interwoven, with a truly shocking and brilliant ending.Bottom line: upon finishing this book you'll say "boy, that was GOOD". Compulsory reading.(compared with the film adaptation of The Manchurian Candidate, the novel is superior ... as is often the case. However the film does capture the essence of the book albeit in a somewhat diluted fashion.)

This book is amazing!

Published by Thriftbooks.com User , 22 years ago
Although I have read several other Condon books, this is by far his best work. I had the rare pleasure of reading this book aloud with a friend. It is so beautifully written that I would stop and re-read a paragraph just because of the way the words rolled off my tongue. The story is engrossing, and the characters are very well developed. It is very easy to visualize every word. This is one of the few books I have read that actually translated well for the movie, (I still recommend reading the book first).If you like devious political thrillers with a sly comic edge, this is the book for you!

Published by Thriftbooks.com User , 22 years ago
I first saw the equally good movie due to the AFI's 100 Greatest Movies rating. It looked like it might be interesting and I was amazed. The movie (made in 1961) directly assaulted McCarthyism and the red scare in a rather apocalyptic satire. This prompted me to seek out the book that the movie was based upon thinking that it could only be better, as books commonly are. Little did I know that the book could have been a companion to the movie and vice-versa. This was undoubtedly due to the fact that Richard Condon, the author, collaborated with the makers of the movie. The book provides insight that the movie couldn't possibly have put in including a heroine-addicted incest-loving rapist.All around the political and social commentary in the story (I'm using story since I suggest that in order to get a good all around view of the author's vision one should both read the book and watch the movie, in either order.) carry the book beyond the author's masterful narrative. If you have any interest in suspense, intrigue, literature, or history this story is a winner.

The Manchurian Candidate Mentions in Our Blog