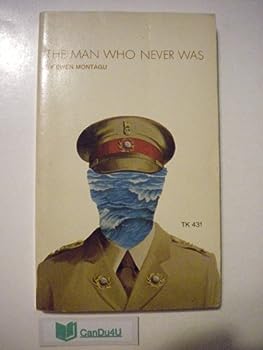 Man Who Never Was

As plans got under way for the Allied invasion of Sicily in June 1943, British counter-intelligence agent Ewen Montagu masterminded a scheme to mislead the Germans into thinking the next landing would... This description may be from another edition of this product.

Published by Thriftbooks.com User , 13 years ago
This is one of the most fascinating books I have ever read--a true story of brilliant British Intelligence during the Second World War. I highly recommend it. Not a spy story, but a highly improbable ruse which convinced the Germans the Allies would attack an area different from their actual target! A quick read and a real page-turner!

Published by Thriftbooks.com User , 14 years ago
It seemed like a simple plan: Leave a dead body, supposedly a British officer carrying official papers, for the Nazis to find. If they accept the phony papers as genuine, they won't anticipate the planned invasion of Sicily, and will deploy their defensive troops to Sardinia instead. Simple in concept, but extremely complicated in practice. The author, who was the British intelligence officer in charge of the scheme, had to make the deception plausible down to the last detail. It worked! Hitler himself was fooled, as captured German documents later showed. This book goes into the details in full, and it is fascinating every step of the way. The author clearly was brilliant at his work, and as a bonus he has a nice, dry wit. This true story is at least as rewarding to the reader as any work of detective fiction.

Published by Thriftbooks.com User , 19 years ago
Modern novellists would never have thought of this simple yet highly complicated plan to deceive the Germans during World War II. This book is written by Ewen Montagu who actually undertook the whole operation. Due to the fact of its high secrecy it could not first be revealed until the Mid-1950's when the first edition came out. Even then the full story could not be told for one of the other great secrets of WWII (the fact that the British had cracked the German code 'Engima') meant that the progress of the deception was monitored throughout its progress.The deception was simple - dump a body with highly secret documents in a place where the Germans will be party to the find. Make it so convincing that they will take the bait. This was to mislead the Germans over the true place where the allies wanted to land (Sicily) so getting them to fortify another part of South Eastern Europe instead - the Dodecanese and Sardinia. It was a plan to save lives - as many allied lives as possible by reducing German resistance. And it worked - beautifully.This book by Montagu gives us the absolute inside story with all the twists and turns to how the idea was conceived and how it was implemented. And for such a simple idea it was of course relatively complicated to implement. How to find an appropriately dead body to dump - where to dump it - how to make sure the Germans would find it without being suspicious of the material and so on. All very fascinating stuff and makes for a good, quick and easy read - it is very well-written and if nothing else is such an amazing story it is hard to put down.This story is well publicised now - it has been the subject of at least one film and one documentary in the "Secrets of World War II" series, however it is nothing like information straight from the horses mouth to make you appreciate what it was all about.My conclusion - Relatively short book but highly readable and very well worthwhile picking up even if your interest isn't in the arena of either War or World War II.

Published by Thriftbooks.com User , 20 years ago
This case is very famous. I remember reading about it in a declassified article in a Swedish book meant to teach intelligence to students of journalism at Lund University.

Published by Thriftbooks.com User , 24 years ago
This book captured my attention to the very end. It thoroughly describes how Intelligence agents planted false documents on a body and left it for the Nazis to "find" during World War II. It was great!
Copyright © 2022 Thriftbooks.com Terms of Use | Privacy Policy | Do Not Sell My Personal Information | Accessibility Statement
ThriftBooks® and the ThriftBooks® logo are registered trademarks of Thrift Books Global, LLC