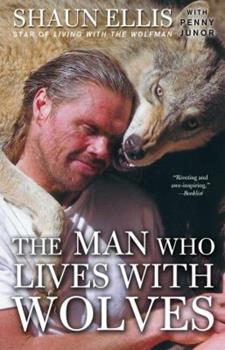 The Man Who Lives with Wolves: A Memoir

What would compel a man to place himself in constant danger in order to become a member of a wolf pack? To eat with them, putting his head into a carcass alongside the wolves' gnashing teeth? To play, hunt, and spar with them, suffering bruises and bites? To learn their language so his howl is indistinguishable from theirs? To give up a normal life of relationships and family so that he can devote himself completely to the protection of these wild...

Published by Thriftbooks.com User , 13 years ago
Fascinating story. I never saw any of the TV specials so the entire story was new to me. I'd just picked it on a whim, but it turned out much more interesting than I thought it would be. It's the full story of Shaun Ellis from childhood to today. He was born to a poor crofter's life in poor rural England without much prospects but with a love for the wild life, which led to work as a gamekeeper, then as military animal trainer, more work as on a wolf reserve, then to the Nez Perce's research center in Idaho where he blossomed as a wolf researcher/activist. All this time he never had formal training but relied on his own instinct's and love for the animals. What was so great about this book was how he managed to join each wolf pack, first by accident, then by design. He must be the only person who has ever done this, the first anyway. That in itself was just a great read and so unreal. When you read it, you almost feel like you are there, because the book is so well written. That reminds me to bring up the point that the book was very easy to read and follow, it's one of the few non-fiction books that I just couldn't put down. Ellis has discovered a lot about wolf pack behavior (and by extension dog behavior), by being there and living with them, much more than academic experts who've only written about them from afar. And just from reading the book I too have learned a lot about wolf behavior. All of it makes sense, once you understand the logic he lays forth. The latter part of the book deals with running his own wolf reserve back in England and the stories of those packs. This is a must read for anyone interested in wolves, and training dogs. I think he's written a couple of other books and I'm going to be getting them too.

The Wonders of Wolves

Published by Thriftbooks.com User , 13 years ago
It takes a brave, perceptive and determined person to be able to answer his own questions. Shaun Ellis is very admirable in his thrilling mission to understand wolves. His dream is to educate the public, banish myths and fears and bring respect to wolves. Being brought up on a farm, he respected nature at an early age. He first encountered man's injustice toward feared animals when as a child he'd watch a fox and her kits play in a horse stable every evening, not long afterward, he'd been walking through the woods and was horrified to find one of those kits hung by a rope. Because he not only watches, but really lives as a wolf, he lets us feel the anticipation, fear and ultimate satisfaction of being accepted as a member of a wolf pack. He presents all his fascinating experience and knowledge of wolves to the reader. We are allowed into his world, the natural world of wolves. The book cover showing a smiling man with his arm around a wolf looks appealing, but Shaun Ellis doesn't spare readers any of the harsh and primitive details of living years in the wild.

It should have been longer

Published by Thriftbooks.com User , 13 years ago
This is a completely fascinating account of a man who spends months and even years living with wolves. Just being able to live alone in the woods without outside help would be amazing; to be able to live with a pack of wolves for months on end is extraordinary. "The Man who Lives with Wolves" is not only extremely interesting for the insight the author brings us about the behavior and lives of wolves (and dogs), but it is also interesting to see how the author seems to almost allow himself to slip out of the human race. The author repeatedly tells us that one of the reasons he loves wolves is because of how important the family unit is too them, but we see the author seem to neglect his own children as he becomes absorbed into the lives of the wolves. However, he is finally shocked back into the human world by troubles in his own family's lives. In any case, the life of the man and the lives of the wolves is absorbing reading from beginning to end. If there is any fault to this book, it is that it could be longer. Well-written, entertaining and informative all the way through. I give very few five-star book reviews. This one deserves it.

remember the myths about wolves?

Published by Thriftbooks.com User , 13 years ago
Everybody has heard the same stories about wolves - how there's an alpha pair, the biggest and boldest of the wolf pack, that sort of thing. Shaun Ellis' new book "The Man Who Lives With Wolves" disproves that and many other such notions. The book is well written and accessible. Mr Ellis' passion for the life he has chosen - living with captive wolf packs - comes shining through on every page. And it's his passion and intelligence that makes this such a good book to read. Mr Ellis grew up in Norfolk, England, which to me seems to be an unlikely spot to begin a lifelong commitment to wolves. (I don't think of England having a lot of wolves.) He grew up with his grandparents on their farm, with no other children around him - or anything most of us take for granted such as television and video games. This autobiography is not a "poor me" writing, just an explanation of how Mr Ellis came to bond with dogs and wolves. He was so focused on working with wolves he was willing to eat jelly beans for every meal just so he could study the wolves more closely. I recommend this book highly to anyone, no reservations. Mr Ellis life story, as well as his work with wolves, is interesting and impressive. He manages to make the connections between dog and wolf behavior quite clear. So even if you are not particularly interested in wolves, I suggest this book to you. If you're a fan of dogs (I like dogs - other peoples' dogs), you will gain some insight as to the whys and wherefores of dogs' behavior. Do yourself a favor and read this book.

Fascinating, can't put it down book for animal lovers!

Published by Thriftbooks.com User , 13 years ago
This book details the life of Shaun Ellis, an Englishman who decided to spend his life learning about wolves and their behavioral patterns. To do this, he actually lives as a wolf, with various wolf packs. His descriptions of the behavior of wolves and the function of each pack member are fascinating and intriguing.As a dog owner, I was especially interested in the descriptions of the motivations behind certain dog/wolf behaviors. After reading the book, I was able to better identify the pack positions of my 6 dogs, his descriptions of the various "job" performed by each animal exactly described my dogs. This will be invaluable information for all dog owners. Shaun also briefly touches upon his personal life and relationships, but the bulk of the book contains his most interesting experiences during a life spent with wolves. I highly recommend this book, I could not put it down. I hope that Mr. Ellis will be able to write another book detailing his further experiences with wolves. A book with more emphasis upon dog psychology would be invaluable to all of us. Highly Recommended.
Trustpilot
Copyright © 2022 Thriftbooks.com Terms of Use | Privacy Policy | Do Not Sell or Share My Personal Information | Accessibility Statement
ThriftBooks® and the ThriftBooks® logo are registered trademarks of Thrift Books Global, LLC