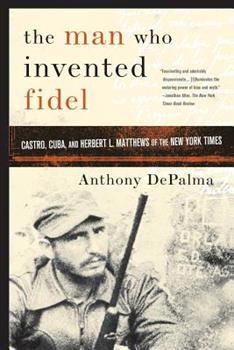 The Man Who Invented Fidel: Castro, Cuba, and Herbert L. Matthews of The New York Times

In 1957, Herbert L.Matthews of the New York Times , then considered one of the premiere foreign correspondents of his time, tracked down Fidel Castro in Cuba's Sierra Maestra mountains and returned with what was considered the scoop of the century. His heroic portrayal of Castro, who was then believed dead, had a powerful effect on American perceptions of Cuba, both in and out of the government, and profoundly influenced the fall of the Batista regime...

Published by Thriftbooks.com User , 12 years ago
DePalma, Anthony 2006 The Man Who Invented Fidel: Castro, Cuba, and Herbert L. Matthews of The New York Times. Public Affairs (Perseus), Cambridge MA ISBN-10 1586483323, ISBN-13 978-1586483326 This book is a cornucopia of factual information rarely found in other English language studies on Cuban matters. The significance of Ruby Phillips a reporter far more experienced and attuned to the Cuban circumstance that Matthews is well described. In my view DePalma still accepts far too readily some of the nonsense on the repression of the country folk "Los Montunos" in the Sierra; apparently the author did not fully realize these mountain peoples had considerable legal and constitutional protection; which gave them access to lawyers such as Manuel R. Penabaz Tobio. DePalma falls into the common error of labeling the Sierra Maestra inhabitants as "peasants," which is not an appropriate term for the once mounted and armed inhabitants of the area. However, to one has to give the author great credit for his mention of the background of Eutimio Guerra (pages 33 and 34 but apparently not included in the index); which is more than most give to this Auténtico Party agrarian reform activist. Still the author accepts, without caveats, the Castro version of events which were used to justify Guerra's execution. Pages 83-84 tell how Celia prepared the illusion of a potent and far more numerous guerrilla forces for Matthews visit. Such a careful function, plus her role as armed guerrilla leader before Castro landed, and her ability to override or direct Castro in the mountains (described in other sources) seems far more consistent with a minder role, than merely that of a woman in love as she is often portrayed. On page 265 for example the author, unlike many academics and other Castro apologists, DePalma calls it close to reality e .g. "... For decades, all but the most radical works about Castro have essentially balanced his idealism and uncanny ability to survive against the ruthlessness of his dictatorship. To people everywhere in the ..." In summary balance this is an excellent book full of useful information and should be read by all those interested in Cuba and especially in the process of corruption of reporters which turns them into "Agents of Influence."

the man who invented fidel

Published by Thriftbooks.com User , 13 years ago
It is very important reading for those that need evidence of the power of the US media and its ability to influence history. Always current reading!

A Book that Cause a Lot of Thoughts

Published by Thriftbooks.com User , 15 years ago
It's only when the books are written that we understand what happened. During the time the events are happening our knowledge was simply too little. It makes me feel old when I think back to the newspaper reports that I was reading at the time, now fifty years ago. As I read this book I found myself full of random and somewhat conflicting thoughts. First was the thought that Castro was an expert at public relations and was able to find exactly the right man to publicize his struggle and at exactly the right time. Second was the attitude of the paper. Most of us, at the time, thought that Castro meant was was being written as quotations. It came as a surprise when he viered left. I find myself still puzzled. Was Castro a dedicated communist all the time and merely fooled the Americans? I believe that it was Truman who later said, 'I should have called him and asked him what he needed to make Cuba better.' Could that have changed things? Matthews was an unabashed liberal. His views on previous wars such as the Spanish Civil War unfailingly took the left wing side. And where does the responsibility of a journalist lie, what about that of a columnist, and Matthews was both? It also reminded me that Castro will be eighty years old in August. What happens now?

Published by Thriftbooks.com User , 15 years ago
This is an excellent book very well documented, but i believe it should had been titled 'The man (castro)that fooled and used Herbert'),sorry to note that the book has two historical mistakes;On page 69 the author wrote that Angel Castro was a spanish soldier that fought in the spanish side of the Spanish -American War, and never returned to Spain, this is incorrect it is true that he fought in that war from 1895 to 1898 as a soldier,under the orders of General Martinez Campos, but after the war he returned to Spain and came back to Cuba as an inmigrant in 1902, there is also a mistake in his quote on page 14 he quoted the following "it wasn't a landing ,it was a shipwreck" and he attribute this words to Juan Manuel Martinez; this is incorrect the one that said those words was Che Guevara besides this, it is a very interesting book i will give it 5 stars

Dark Chapter for the Gray Lady

Published by Thriftbooks.com User , 15 years ago
New York Timesman DePalma provides an excellent, balanced examination of his newspaper's controversial role in Castro's rise to power nearly five decades ago. The Times scored a journalistic coup in February 1957, when its veteran war correspondent, Herbert Matthews, landed an exclusive interview with Castro in defiance of the dictator Batista's censorship edict. Matthews's explosive page-one story revealed to the world that the young Cuban rebel -- widely thought to have been killed by Batista's forces -- was "still alive and waging a successful guerrilla campaign" in the Sierra Maestra mountains. It's clear that Matthews' story exaggerated Castro's strength and prospects, although it's not true, as Castro later claimed, that he was down to just 18 men and had them march around in circles in order to deceive Matthews. Matthews was guilty of gullibility, or worse. He had taken sides in the Cuban revolution. And in this regard, he was a repeat offender: his coverage of the Spanish Civil War had been biased in favor of the Loyalists. And before that, he openly supported Mussolini in his conquest of Ethiopia. Matthews was one of those reporters who saw himself as a shaper of events, not just a chronicler of them -- a dubious prospect for a profession founded on trust and objectivity. The Times compounded this situation by permitting Matthews to serve simultaneously as news reporter and editorial writer -- an experiment the paper soon abandoned. Although denied the paper's new columns to advance his cause, Matthews continued to write editorials in support of Castro, even when it became plain that the Cuban strongman had abandoned all pretense to democratic, constitutional governance. Matthews is still an object of opprobrium for many Cuban-Americans, and continues to be hailed as a revolutionary hero among Castro loyalists. It's disturbing that a seasoned journalist -- let alone one associated with one of the world's most influential publications -- would put himself in such an untenable situation.
Copyright © 2020 Thriftbooks.com Terms of Use | Privacy Policy | Do Not Sell My Personal Information | Accessibility Statement
ThriftBooks® and the ThriftBooks® logo are registered trademarks of Thrift Books Global, LLC