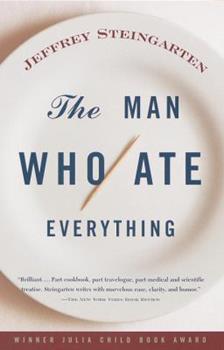 The Man Who Ate Everything

Winner of the Julia Child Book Award A James Beard Book Award Finalist When Jeffrey Steingarten was appointed food critic for Vogue , he systematically set out to overcome his distaste for such things as kimchi, lard, Greek cuisine, and blue food. He succeeded at all but the last: Steingarten is "fairly sure that God meant the color blue mainly for food that has gone bad." In this impassioned, mouth-watering, and outrageously funny book, Steingarten...

Published by Thriftbooks.com User , 17 years ago
`The Man Who Ate Everything' is written by Jeffrey Steingarten, credited with being the food critic for `Vogue' magazine, belongs to a very exclusive club of American culinary columnists whose present leading light is James Villas and whose biggest star was M.F.K. Fisher. Oddly, I always had trouble appreciating Fisher's writing, while I simply can't get enough of either Villas or Steingarten. And, of these two, I am leaning to Steingarten if anyone asked me for a `good book on food'. Steingarten's greatest strength as a writer to the amateur foodie is his ability to put himself in our position vis-à-vis the experts. He never pictures himself as an expert like Harold McGee on food science or Mario Batali on Italian cuisine or Nick Malgieri on baking or even like gifted neophyte Alton Brown on cooking technique. Unlike these professionals and teachers, Steingarten's shtick is how he gets there, not what he as learned after arriving. He is the culinary everyman's surrogate who can travel to Venice to visit Marcella Hazan for an education in cooking and eating Venetian seafood and have cooking expert Marian Cunningham fly in to teach him how to make a perfect piecrust. Steingarten's introduction which gives an explanation of the book's title makes one seriously wonder what our dear reporter did before he was tapped to write on food for `Vogue'. His list of culinary aversions could fill several major cookbooks, and have. One wonders if Steingarten had any food related assignment before he embarked on reforming his tastes to fit his `Vogue' assignment. While I sometimes fear that my sense of taste is remarkably dull compared to those of talented chefs, my compensation is that there is literally nothing I will not eat and there are very few things I will avoid. In contrast, pre-Vogue Steingarten had aversions to kimchi, dill, swordfish, anchovies, miso, falafel, clams, and all Greek food. The introductory essay is the story of how Steingarten overcame all of these aversions except to the one for eating insects. This first essay is a perfect exemplary of Steingarten's style. It may have been easier to say these are the aversions he overcame, but it is much more fun to describe how he overcame them. This is not to say that the book is all about the tourist to the banal. Steingarten is well prepared for most of these trips and we, along with the author, learn much in the course of his trials and errors. While this is not a book about food science a la Robert Wolke's `What Einstein Told His Chef', there is a lot of scientific method afoot in many of the essays. My favorite is Steingarten's excursion into the world of the perfect piecrust. As dedicated `Good Eats' fans know from Alton's episode on pie crusts, the building of the perfect pie crust involves resolving two contrary properties, flakiness and tenderness while doing battle with properties of wheat flour gluten which work so well when creating bread, but which, it is said, cause all sorts of un

Perfect for those in-between times

Published by Thriftbooks.com User , 18 years ago
This is the perfect book to have when at a traffic jam, doctor's office or any of the hundreds of daily jams we find ourselves caught. I found myself laughing out loud several times at many of these admittedly wacky but witty tales. The subject matter was in itself a winner - he touches on everything from non-fat fat to fruit ripening to when to buy certain products. And this is the best feature of the book - it is not only entertaining but also informative...the best of both worlds. He does not have the poignancy of a M.F.K. Fisher or the razor claws of the reviewer Simon Britchky or the down-to-earth charm of a Nika Hazelton but in his own way, he is just as good.

Published by Thriftbooks.com User , 18 years ago
and I would NEVER send anyone fan mail.I'm afraid that my review of this book will be a complete cliche - ie. I couldn't put it down, I didn't want it to end, I laughed, I cried, I gained 10 pounds etc.I found Steingarten to be insightful, hilarious, sarcastic and delightfully neurotic. I now realize the joy I missed over the years by not being an avid Vogue reader. I can't believe it took this long for my first exposure to such exquisite food writing. I CAN'T BELIEVE NO ONE TOLD ME TO READ THIS BOOK UNTIL NOW!As a (relatively) young person, who has recently discovered the joys of "that which is edible" - I found this book to be as informative as it was entertaining. Many of the topics that Steingarten explores were more relevant to my own culinary exploits and interests than I could have hoped. Despite the fact that I do not have the same resources and colleagues that would allow one to travel as far and wide as I'd like(and as he does), Steingarten manages to truly take the reader with him as he travels, while simultaneously making it possible for the young (or older) homebound gastronome to relate.I will forevermore approach the subject of food as influenced by Jeffrey Steingarten. I will cook every recipe in his book. I will travel to eat. And most of all, I will overcome my food aversions (especially if stranded on a desert island and everything I would normally eat has run out).Although I LOVED this book - I had trouble reading it without a break - since these are drawn from his monthly writing, it IS a big dose of food writing, but I took a night off and finished it with no problem. Hope y'all like it!

Hilarious weird, and truthful (for the most part)

Published by Thriftbooks.com User , 19 years ago
This is the funniest food-book I've ever read! I laugh out loud while reading it, and my husband always wants to know "what's so funny"?Although he must be partly an epicurean hedonist, Mr. Steingarten has a very technical and, well, weird way about analyzing food. When he was nominated food editor of Vogue, instead of starting to plan wonderful exotic food trips, his first worry was - how was he going to force himself to taste things he doesn't like?He also hits on many truths - such as "the french paradoxe" - and wonderfully bashes the current American fat phobia.He often takes a very technical approach - the lesson on fruit ripening really opened my eyes. Ever wonder why avocados don't turn brown if you leave the stone in; read this.He only disappoints me with his enthusiasm for Olestra. From someone who is so on target in criticizing trashy, artificial American junk food, "Butter Busters" and the like, this is a big let-down.Read "The Zone" by Barry Sears, and 99% of Mr. Steingarten's observations (about olive oil, fats, carbohydrates, vegetarianism, etc...)will hit home.
Copyright © 2022 Thriftbooks.com Terms of Use | Privacy Policy | Do Not Sell My Personal Information | Accessibility Statement
ThriftBooks® and the ThriftBooks® logo are registered trademarks of Thrift Books Global, LLC