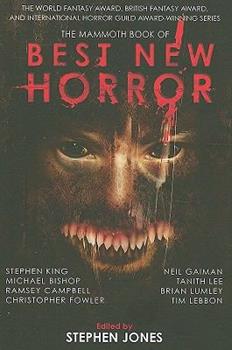 This annual collection of exceptional horror and dark fantasy fiction stories is the essential must-have for horror buffs. The 20th edition of this showcase of horror includes a comprehensive overview of international selections, an impressively researched necrology, and a list of indispensable contact addresses for the dedicated horror fan and aspiring writer of true horror.

Published by Thriftbooks.com User , 12 years ago
This was an interesting look 2008's stories. Heavy on the English writers, of course, but that makes a good amount of sense given the number of venues to publish as opposed to the U.S. King and Gaiman's story were very solid and Benedict's "The Beginning of Sorrow" was another highlight. Good stuff.

Published by Thriftbooks.com User , 13 years ago
This is always a treat to read and this year's offering is not exception. The stories are all different and some are stronger than others. The ones that lingered for me "The Long Way," the tale of a kid who has to pass a spooky house to visit his uncle...Can relate from those younger days, huh? The "Camping Wainwrights" a women's lib tale of revenge. Also memorable, "Our Man in the Sudan," for the tension between logic and superstition in an exquisitely detailed exotic land. There are no zombies, vampires, or witches, just good old fashioned ghosts, devils, aliens and evil. The news of the year is also there, not something that I usually spend much time with, but nice to skim through. A solid B offering and plan to read next year's.

Published by Thriftbooks.com User , 13 years ago
It's tempting to say, with this being the 20th Anniversary Edition, that Best New Horror has reached a new watershed in the quality of its selections - - but in reality that happened last year, with the arrival of newcomers Gary McMahon, Simon Strantzas and Simon Kurt Unsworth (two of whom make a reappearance this year). Mark Samuels, too, is a relative newcomer although, remarkably, he actually made his debut in this annual showcase series 5 years ago. If you're scratching your head and saying, "I've never came across any of these names in my local bookstore" then you can be forgiven, for so far these gentleman have only been able to learn their craft within the independent small press publishers (alas, few new women writers in recent years are making a name for themselves in modern horror fiction, although one - Allyson Bird - recently won Best Short Fiction Collection for "Bull Running for Girls" from the British Fantasy Society). Other names in this year's edition, such as Tim lebbon and Sarah Pinborough, will be familiar to readers of Leisure Books' long running horror fiction line. It may, however, come as a surprise to many to know that, despite Leisure's consistent publication schedule and wide distribution, they are in fact an independent publisher... ... meaning that, currently, none of the major league London or New York publishers (those part of international conglomerates) has a horror fiction imprint. This, then, is why Stephen Jones's "The Mammoth Book of Best New Horror" series is so vital (even more so given that "The Year's Best Fantasy and Horror" has been put on hiatus while its editors secure a new publisher - although it was gratifying to hear that Ellen Datlow was immediately picked up to do "Best Horror of the Year" for Night Shade Books in the meantime, though unsurprising to note that it was an independent press which is doing so). This is where most of us first hear of the best of the new writers worth seeking out. Last year's volume 19 was one of the largest `mammoths' in recent years and its utterly solid lineup - featuring great fiction from the likes of Joe Hill and Glen Hirshberg - is a hard act to follow. Amazingly volume 20 trumps it: volume 18 was one of the series' most cross-genre, boundary-defying installments, featuring writers such as Michael Bishop, Gene Wolfe, Elizabeth Hand and Geoff Ryman, all of whom are well-known for their association with fantasy and science fiction (volume 18 sold out of its entire print run within a year in the UK). Volume 20, however, is the series' most eclectic addition: all horror, yes, but this time our editor seems to be feeling mischievous, with the inclusion of a number of humorous tales, the sly "Feminine Endings" by Neil Gaiman, the delightful "The Pile" by Michael Bishop and the exuberant "The Camping Wainwrights" by Ian R. MacLeod. But there are also `old' horrors set many years in the past, their writers showing fantastic confidence and skill when it comes to
Trustpilot
Copyright © 2022 Thriftbooks.com Terms of Use | Privacy Policy | Do Not Sell My Personal Information | Cookie Preferences | Accessibility Statement
ThriftBooks® and the ThriftBooks® logo are registered trademarks of Thrift Books Global, LLC