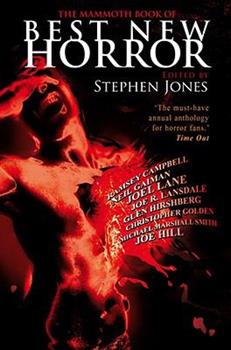 Some very good stories, but not very scary

Published by Thriftbooks.com User , 14 years ago
Volume 19 of "Best New Horror" contains a collection of short stories (ranging in length from around 10 pages to around 60) loosely based around the horror genre. Each story was entertaining in its own right, though some carried more of a punch than others. I will say that while all of the stories were good, none were particularly frightening. This book (and all I've read in its series) are great to pick up used.

The biggest and best yet!

Published by Thriftbooks.com User , 14 years ago
Last year's volume recently won the British Fantasy Society Award for Best Anthology of the Year, and deservedly so - - but what about this year's Volume 19, which is one of the longest in the series, a total - from cover to cover - of 640 pages? Simply put, these are the best short stories you'll read this year, period. In ANY genre. 'Nuff said. (This review comes from an advance copy bought at the FantasyCon, Nottingham England book launch on September 20th, 2008. Twelve of the contributors were on hand to sign the book. Only 50 advance copies were made available for the launch.) If you haven't already done so, I urge you to seek out Volume 18, for not only is it itself an award-winning book, but so are three of the stories inside: Elizabeth Hand, Gene Wolfe and Geoff Ryman. Also included in last year's volume are brilliantly blazing stories by Glen Hirshberg, David Morrell, Al Sarrantonio (editor of the massive 999 anthology a few years back), Richard C. Matheson and an 88 page novella by the alwasy consistently dependable Kim Newman!
Trustpilot
Copyright © 2022 Thriftbooks.com Terms of Use | Privacy Policy | Do Not Sell or Share My Personal Information | Accessibility Statement
ThriftBooks® and the ThriftBooks® logo are registered trademarks of Thrift Books Global, LLC