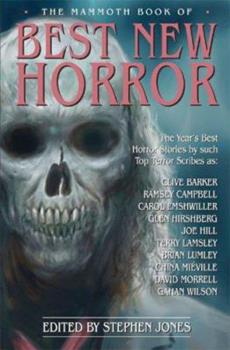 Here is the latest edition of the world's premier annual showcase of horror and dark, fantasy fiction, from a series that has won the World Fantasy Award, British Fantasy Award, and the International Horror Guild Award. It features some of the very best short stories and novellas by today's masters of the macabre -- including Neil Gaiman, Glen Hirshberg, Tanith Lee, Ramsey Campbell, and Charles Coleman Finlay.

Published by Thriftbooks.com User , 14 years ago
WINNER of The 2008 British Fantasy Society Award for 'Best Anthology of the Year 2007'. What is horror? Well, I can't answer that. After all, I'm not an S.T. Joshi or a John Clute and, further, not nearly as well read in the genre as I'd like to be (my 'to read' pile is really a mountain! Even when funds are tight, buying the books is the easy part - it's getting the time to read them. Sigh.) But let's take a stab at it anyway, if only from the ill informed view point of a humble reader. Even as a teenager during the '80's horror boom, when I first discovered the delights of the dark fantastic, I had little to no interest in movies or TV relating to the horror field. It was always the midlist writers to whom I gravitated: Ramsey Campbell, Dennis Etchison, Charles L. Grant, Thomas Ligotti, Thomas Tessier and others. Many more, of course, most of whom, although they were all active in the '80's, I didn't personally get around to reading until recently. The whole bad joke of the Splatterpunk movement was, mercifully, short lived and rightly derided. However, to me, that's all media horror is: sure, I can get as much of a visceral thrill out of, say, Saw or The Descent as anyone, but they leave little impression. As sad looking and 'of the moment' as a Halloween cake seen in a bakery window on the 1st of November. Old horror was easy, right? It was monsters, surely. Werewolves and vampires and cheap thrills and shocks as celebrated in Creepshow's homage to EC Comics. But is new horror, then, simply the monsters within us? Absolutely... but as many genre writers emerging from the '80's boom began to realize this, and to write it, they soon became aware - as did their publishers - that what they were now producing were mainstream thrillers. And thus they became marketed as such. So where does that leave horror as a genre? Last year Clive Barker called for the death of genre distinctions and, indeed, as regards to the horror field at least, this may already have occurred, its 'horrific' elements being subsumed into fantasy and the modern day thriller. Horror, for me, are those tales which embody the feel and delicious flavor of that wonderfully archaic word `foreboding'. A sense of unease while you're reading it. For me that is the distinction. While you're reading it. Those are the stories. Some 'horror' tales read like ordinary mainstream fiction, their 'horror' element grafted on during the final few pages. Until then there was no sense beforehand of foreboding or unease. These are the situations. True horror stories are as much about the journey as they are about the destination (sometimes it is all about the journey). So, then, "Summer" by Al Sarrantonio is a horror story. No monsters, no sociopaths but a simple scenario (what if the best summer ever never ended?) and imbued with an absolutely delicious sense of unease and foreboding throughout. When it comes to embodying these principles Ramsey Campbell has justly ea

A collection of toxic horror

Published by Thriftbooks.com User , 15 years ago
I wish there were more to the stories but all in all, this book is worth the money and your time. Depending on your tastes and demeanor, each story brings a new revelation. Fun to read and having intense moments all the stories were good well worth a four star rating.
Trustpilot
Copyright © 2022 Thriftbooks.com Terms of Use | Privacy Policy | Do Not Sell My Personal Information | Cookie Preferences | Accessibility Statement
ThriftBooks® and the ThriftBooks® logo are registered trademarks of Thrift Books Global, LLC