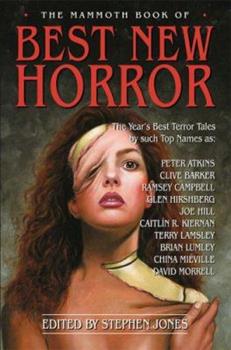 Here is the latest edition of the world's premier annual showcase of horror and dark fantasy fiction. This collection features some of the very best short stories and novellas by today's masters of the macabre -- including such writers as Neil Gaiman, Glen Hirshberg, tanith Lee, ramsey Campbell and Charles Coleman Finlay. The Mammoth Book of Best New Horror also features the most comprehensive yearly overview of horror around the world, lists of useful...

Published by Thriftbooks.com User , 13 years ago
The volumes in the anthology series The Mammoth Book of Best New Horror I tend to liken to sandwiches, with some short stories wedged between a pair of non-fiction sections. At the beginning of volume 17 (representing the year 2005) is a long chapter about the year in horror. Editor Stephen Jones provides an exhaustive (and somewhat exhausting) summary of almost all the books, movies, DVDs and other media that were even tangentially related to horror. Some items are well-described, but these tend to be ones by the bigger-name writers. Others are mentioned briefly in a single sentence; amusingly, one such throwaway item would, within a couple years, become a major phenomenon, namely Stephanie Meyers's Twilight. On the other end of the book is a necrology, which provides an equally huge list of people who died in 2005 and were somehow linked to horror. There is also a brief section on horror organizations and publishers. But just like the bread is less important than the meat in a sandwich, such is the case here, where the meat is a collection of short stories. Even for those only vaguely familiar with the genre will find some recognizable names, including David Morrell, Clive Barker, Brian Lumley and Ramsey Campbell. Many of the other writers are less well-known. As in previous volumes, Jones (who is British) shows a definite bias towards authors from the U.K., which are represented out of proportion compared to their country's population. My guess is that there are more American horror writers because there are simply more Americans, but that's not what you'd see here. More important than backgrounds, however, are the quality of the stories, and I have to say they are decent overall, with a couple bad ones and a couple great ones. I think there is less of an emphasis on humor than in the 2004 volume, which I feel is appropriate. Among the best are Glyphotech by Mark Samuels and Time Was by David Morrell. On the other end of the spectrum were duds like Caitlin Kiernan's almost unreadable La Peau Verte. So Best New Horror #17 isn't perfect, but anthologies rarely are. What this book offers is a good look at the world of horror along with some stories that are mostly entertaining. If you are a die-hard horror fan (or a fan of some of the authors included), this is worth picking up.

Better bet in the series

Published by Thriftbooks.com User , 14 years ago
I've read at least a dozen of The Mammoth Book of Best New Horror series and I must say this is far and above most of them. Editor Stephen Jones has picked a fine crop in this edition (number 17). With 2 stories from usual contributor Ramsey Campbell "The Decorations" amazed me while the other story "The Winner" seemed anything but, wondering if Jones couldn't have found a better story to close the volume with. Clive Barker turns in an excellent short in "Haeckels Tale" and Adam L.G. Nevill "Where Angels Come In" along with "I Live With You and You Don't Know It" by Carol Emshwiller are also excellent tales. "Gulls" by Tim Pratt is just a perfect horror short and "Pinkie" by Elizabeth Massie featuring a talking pig that becomes a little too domesticated had me laughing out loud and scared at the same time. "Best New Horror" by Joe Hill was both absurdly offbeat and spooky and "The Other Family" by Roberta Lannes reminded me of that old UPN series "Nowhere Man" which I also enjoyed. "Sickhouse Hospitality" and "Time Was" were also well done. The dogs of the set are "Black and Green and Gold" absolutely boring and "The Taint" along with "le Peau Verte" was just tedious. Overall a good read if you like horror anthologies.

Published by Thriftbooks.com User , 15 years ago
This book is a must-have for horror lovers. It features a look back at the year in horror, and then offers up some of the creepiest tales to be had. Strongly recommended!
Trustpilot
Copyright © 2022 Thriftbooks.com Terms of Use | Privacy Policy | Do Not Sell My Personal Information | Cookie Preferences | Accessibility Statement
ThriftBooks® and the ThriftBooks® logo are registered trademarks of Thrift Books Global, LLC