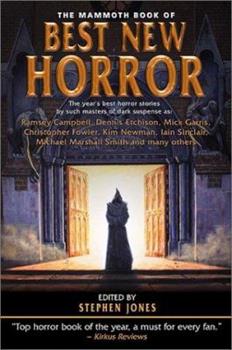 A collection of the best horror stories of 2000 showcases the work of such authors as Ramsey Campbell, Dennis Etchison, Christopher Fowler, Tim Lebbon, Kim Newman, and Iain Sinclair.

Published by Thriftbooks.com User , 18 years ago
The BEST NEW HORROR series edited by Stephen Jones is the most ecletic collection of dark fiction beingpublished today.Jones`selections covers a wide range of styles, themes and subgenres : Psycological Horror,Black Humor,Gothic, Splatter, Ghost Stories and other kinds of dark fiction.There are stories for all tastesand I must confess that quite a few gave me shivers, others made me think about the events and othersscared me a lot.Here are some of my favourites with brief commentaries about them:FOREVER GRAMMA - Mick Garris - 8,0 - Here is an amusing blend of Stephen King, Bradbury's nostalgia,Romero's Night of Living Dead gorefest and... ( ooppsss!!! ).Brainless entertainement !!!!!!THE GROTTO - Kathryn Ptacek - 8,0 - Good story about ancient myths marred by an anticlimatic ending.NO STRINGS - 7,0 - Ramsey Campbell - I'm not a great fan of Campbell's style that seems to metoo cryptic and alusive, but this story about a strange busker with a violin is moving and creppy.THE DETAILER - Dennis Etchison - 10,0 - One of the pleasures of reading a collection with new and well-known authors is to sift through his contents and discover a hell of a good story like this one. This story revolves around an ingenuous wash car attendant that becomes "involved" in a murder. It's IMPOSSIBLE to convey the sense of dreadthat Etchison slowly builds using simple words. The Detailer is a masterpiece of psycological horrorand one of the most extraordinaries works of dark fiction that I ever read.Should be ranked withthe best american short fiction of ANY genre.I HAVE A SPECIAL PLAN FOR THIS WORLD - Thomas Ligotti - 10,00 - I must confess that I was a little apreheensive in readingthis story because some commentaries about the "new" Ligotti phase made me think that his work would degenerate in crass commercialism.I agree that his style is less tight and literate and his plots are stronger than before, but this transition didn't marred Ligotti`s knack to show us the underside of human existence.A disturbing nihilistic masterpiece of black humour.XENOS BEACH - Graham Joyce - 9,5 - After a failed love affair, man tries to recover himself by vistiting a lonely beach called Xenos.Beautiful hallucinatory work that lingers on the mind long after story is finished.THE REPULSION - Tim Lebbon - 9.00 - This wonderful piece of magic realism and quiet surrealismis perhaps better suited for fantasy anthologies than horror.Tim Lebbon is a major new talent that MUSTbe discovered.COMING HOME - Mark Morris - 8,00 - Pleaseant if predicable story about a man who dies in a caraccident and returns to his wife on Christmas day.THE HUNGER OF THE LEAVES - Joel Lane - 9,00 -Thieves become trapped in an strange forest whose menacing leaves with clawlike shapes and red veins running through them seems to be "hungry".Wonderful weird fiction in the Lovecraft and Clark Ashton Smith tradition.EMPTY STATIONS - Nicholas Royle - 8,5 - Like the magnificent HOMECOMING ( Best New Horror Vol 6)this story ab

A Fine Crop of Horror Stories this Year

Published by Thriftbooks.com User , 21 years ago
Volume XII is arguably one of the best so far in the Best New Horror series. Packed with 494 pages of 22 stories and novellas, and including a definitive necrology and intro to the state of horror in 2000, it is well worth a read. Here are just some, but by no means all, of the gems you'll find inside:Kim Newman continues his Alternate History Anno Dracula series with the short story "Castle in the Desert" and the novella "The Other Side of Midnight". IMHO, The latter is one of Newman's best works so far. Using the narrative hard-boiled detective story style of James Ellroy and Raymond Chandler, Newman walks us through the Hollywood noir of the 1980s in a world where the Vampire has become grudgingly accepted by the human race. Newman's main character is a beautiful, but ancient vampire detective involved in a mystery surrounding the making of Orson Welles' remake of Dracula. Along the way we meet the likes of Lt. Columbo, Barbie the Vampire Slayer and other familiar real and imagined characters in a world where true film and tabloid history become twisted.In "I have a Special Plan for this World", a story of Corporate Horror, Thomas Ligotti gives us a nihilistic vision of a Dark Dilbert's rapid, but futile rise up the corporate ladder after his mysterious fog-shrouded company moves to Murderville and all it's management are slowly killed off. Several of the stories follow in the style of some familiar women writers of horror. Two stories, Tim Lebbon's "The Repulsion", and Kathryn Ptacek's "The Grotto", set in exotic Italian settings where the past is ever pervading on the present, display the slow, rising horror of simple situations devloving into nightmare reminiscent of some Daphne du Murier stories. The influence of Shirley Jackson can be felt in Terry Lamsley's superb "Climbing Down From Heaven" where two spinster sisters fall under the spell of their new Updikian neighbor, who is not only very mysterious, but an eligible bachelor as well.Paul J. McAuley's "The Bone Orchard" is a chilling story in the vein of "The Sixth Sense" and "The Changeling" that takes place in a Whitechapel cemetery. Graham Joyce uses the subtle style of English Horror defined by Ramsey Campbell in a story of ghosts on an ancient Greek island in "Xenos Beach", while Campbell's own "No Strings" reveals the hidden face of the horror of the urban nightmare. Chris Fowler takes us on a tour of women and historic pubs in "At Home in the Pubs of Old London" with a Serial Killer as guide.And if you thought there was nothing new to say about the Living Dead, Mick Garris takes Zombiedom to a whole new level of "Schlock" in "Forever Gramma."Of only two minor criticisms I have, the first concerns the editor's neglect to cite some of the most important work of the deceased in the Necrology (how can one not mention, for example, "Dr. Zhivago and Bridge on the River Kwai for Alec Guinness?). The other concerns the over use in the 72 page Introduction by the editor
Trustpilot
Copyright © 2022 Thriftbooks.com Terms of Use | Privacy Policy | Do Not Sell My Personal Information | Cookie Preferences | Accessibility Statement
ThriftBooks® and the ThriftBooks® logo are registered trademarks of Thrift Books Global, LLC