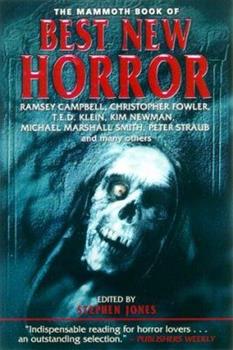 Well worth the money...

Published by Thriftbooks.com User , 21 years ago
If it wasn't for these horror anthologies (also The years best fantasy and horror) I would never have found all these great writers (from both sides of the atlantic). I do realize both of these top anthologies mentioned above have their "favorite" core authors, but all in all Stephen Jones is an excellent editor in mostly everything he touches. Having found such authors as Michael Marshall Smith, James Herbert, Simon Clark, Ramsey Campbell from Great Britain and Joe R. Lansdale, Joyce Carol Oats, Peter Straub, F. Paul Wilson to name just a small list its hard to include all our own personal favorites but hopefully these will continue to be published into the future.

Published by Thriftbooks.com User , 22 years ago
I must confess to feeling rather more enthusiastic than the previous two reviewers about this volume. Horror fans have a lot to thank Steven Jones for, and in the list of his achievements this series must come near the top. While anthologies such as Dark Forces, Douglas E Winter's Prime Evil and Al Sarrantonio's 999 have been excellent one-off collections, the Best New Horror series is an annual reminder of how a genre with a sometimes dubious reputation can still come up with some of the most brilliantly written stories of the year. These are pieces by talented authors who are obviously working in the genre out of choice, producing work that stands head and shoulders above the vast majority of mainstream fiction currently available. Volume 11 maintains the tradition established by its predecessors, with standout novellas by F Paul Wilson (Aftershock), Tim Lebbon (White) and Peter Straub (Pork Pie Hat). David Case (famous for The Cell and The Hunter from The Pan Book of Horror Stories) also has an entry, and Paul McAuley's "Naming the Dead" is a super tale of a Victorian detective tackling spirits in modern-day London in a story which sounds from his introduction as if it was written for Jones' Dark Detectives anthology which came out from Fedogan and Bremer last year. Certainly it would not have been out of place in that volume. So, 21 stories with not a bad one among them, a summary of the year in horror and a detailed "Necrology" listing all those connected (however tenuously) with the genre who have departed over the last twelve months. Anyone with a passing interest in how good this genre really can be (and that's nothing short of excellent to me and you) should get a copy of this now.

Another Solid Installment But...

Published by Thriftbooks.com User , 22 years ago
I look forward to the yearly installment of this series and regularly buy it without question. The series has many things to recommend it; a) a great introduction detailing current trends in horror print, film, comics, websites, b) a nice necrology (a record of deaths in the industry) detailing careers of notable writers, actors, producers, c) a resourceful collection of addresses and websites for the horror fan and finally d) superb stories. The stories are always the treasure and I am constantly taking down old versions and rereading them with gusto. Despite the fact that three of the stories appear in other current anthologies that I've bought, I found the selection this year solid. Stephen Jones (the editor) did another fine job of culling a nice spectrum of the genre. My only complaint is about the editing. It may seem a minor issue but I found numerous editing errors in this year's installment. They were the type of errors that were clearly from the use of computer spellcheckers versus the use of a careful proofreader. (Properly spelled homonyms that were out of place in sentences, etc.) It was sad to see this series come down a notch in quality simply due to cutting corners. Nonetheless, it remains THE annual anthology to purchase if you are a fan of horror fiction.
Trustpilot
Copyright © 2022 Thriftbooks.com Terms of Use | Privacy Policy | Do Not Sell My Personal Information | Cookie Preferences | Accessibility Statement
ThriftBooks® and the ThriftBooks® logo are registered trademarks of Thrift Books Global, LLC