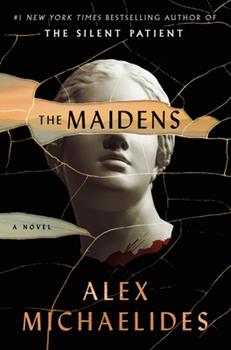 Edward Fosca is a murderer. Of this Mariana is certain. But Fosca is untouchable. A handsome and charismatic Greek tragedy professor at Cambridge University, Fosca is adored by staff and students alike--particularly by the members of a secret society of female students known as The Maidens. Mariana Andros is a brilliant but troubled group therapist who becomes fixated on The Maidens when one member, a friend of Mariana's niece Zoe, is found murdered...

Published by MizzyRed , 4 months ago
The Maidens was definitely a twisty book! I think I ended up distrusting everyone, including Mariana maybe going crazy and having this all be in her head. And still I totally guessed wrong! It was fun trying to do the figuring out though. I find myself liking these mystery thrillers more and more and so I am glad I got the chance to read this one before it comes out. I liked the addition of all the Greek lore and history in this book, along with the mysterious murders and everyone with ulterior motives. They are what carried the book more than Mariana I think. Mariana wasn't bad, but she was so unsure of anything going on that I did not care for her as much as I was meant to. It still ended up being an exciting book though. I haven't read the first book that this author wrote, but after reading The Maidens, I will be checking out The Silent Patient from the library posthaste!

Somewhat of a letdown

Published by kdowli01 , 4 months ago
This book has been all over, and I was excited to get an early copy of it (thanks @bookishfirst and @celadonbooks). While it was exciting, and I got through it in an afternoon, but I didn't love it unfortunately. Synopsis: Mariana, a group therapist, is called to Cambridge University by her niece Zoe, who's in a panic because her roommate has been murdered, and she's positive a professor there is responsible. As Mariana investigates the murder, will she end up in the cross-hairs of the killer? Here are my quick thoughts! Things I liked: - Very short chapters, it absolutely flew by - The tie-ins to The Silent Patient - Greek mythology references were interesting - The cult vibe...I wish there'd been more of this - The twist at the end caught me completely by surprise Didn’t like: - The “cops are inept so I’ll investigate myself” trope - The man who refused to take no for an answer from Mariana, and then actually gets aggressive to force a relationship, being portrayed positively - Mariana’s characterization that all sociopaths emerge in the same way - The ending...I just don't get why, some of it didn't make sense... Sorry, please don't hate!

A dark, atmospheric and unpredictable thriller

Published by lurkykitty , 4 months ago
By lurkykitty Mariana, a group therapist in London, is grieving the accidental death of her husband Sebastian which happened a year ago. She receives a frantic call from her niece, Zoe, who is a student at Cambridge University, where, years ago, Mariana had met Sebastian. Zoe's close friend Tara has been brutally murdered. Tara was a member of a secret society of beautiful and privileged young women called The Maidens, cultivated by Greek tragedy professor, Edward Fosca. Mariana travels to Cambridge to support her niece. Soon after, another female student is murdered. Zoe confesses to Mariana that Tara had expressed a fear that Fosca was going to kill her. Mariana becomes obsessed with solving the murders and investigating Fosca. The Maidens has a host of interesting characters and multiple suspects. The Cambridge University setting with its old buildings, makes for a dark, creepy, atmospheric setting. Themes of Greek mythology and tragedy are interspersed and add to the darkness in the story. The ending has a huge twist which I did not predict. The Maidens is a well-written, enjoyable, compulsively readable novel of psychological suspense. @CeladonBooks #TheMaidens #Partner #CeladonReads #BookishFirst
Copyright © 2020 Thriftbooks.com Terms of Use | Privacy Policy | Do Not Sell My Personal Information | Accessibility Statement
ThriftBooks® and the ThriftBooks® logo are registered trademarks of Thrift Books Global, LLC