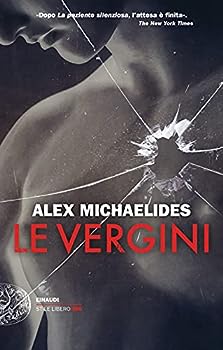 Edward Fosca is a murderer. Of this Mariana is certain. But Fosca is untouchable. A handsome and charismatic Greek tragedy professor at Cambridge University, Fosca is adored by staff and students... This description may be from another edition of this product.

Published by Sarah , 3 months ago
I read this whole book in 2 days, it was engrossing, and I was surprised at the end! I will say, I did read it before I read "The Silent Patient," and if I had to pick I liked "The Silent Patient" a little better. If you love psychological thrillers and murder mysteries, this book is for you.

Easy to read, but a little disappointing

Published by Tanya V , 4 months ago
Maybe it was due to reading this right after Atlas Shrugged, but the writing and character development felt a bit juvenile. I was expecting more from this book, more descriptive writing, more Greek mythology, and less plot holes. Overall, it was an easy ready and the twist at the end was a good one, but didn’t feel fulfilling enough.

Published by Lindsey , 8 months ago
I adored this book as much as his first one! I love the mythology aspects, it had a lot of twists and turns and was beautifully written.

Published by KitKat , 1 year ago
The Maidens was definitely a twisty book! I think I ended up distrusting everyone, including Mariana maybe going crazy and having this all be in her head. And still I totally guessed wrong! It was fun trying to do the figuring out though. I find myself liking these mystery thrillers more and more and so I am glad I got the chance to read this one before it comes out. I liked the addition of all the Greek lore and history in this book, along with the mysterious murders and everyone with ulterior motives. They are what carried the book more than Mariana I think. Mariana wasn't bad, but she was so unsure of anything going on that I did not care for her as much as I was meant to. It still ended up being an exciting book though. I haven't read the first book that this author wrote, but after reading The Maidens, I will be checking out The Silent Patient from the library posthaste!

A dark, atmospheric and unpredictable thriller

Published by lurkykitty , 1 year ago
By lurkykitty Mariana, a group therapist in London, is grieving the accidental death of her husband Sebastian which happened a year ago. She receives a frantic call from her niece, Zoe, who is a student at Cambridge University, where, years ago, Mariana had met Sebastian. Zoe's close friend Tara has been brutally murdered. Tara was a member of a secret society of beautiful and privileged young women called The Maidens, cultivated by Greek tragedy professor, Edward Fosca. Mariana travels to Cambridge to support her niece. Soon after, another female student is murdered. Zoe confesses to Mariana that Tara had expressed a fear that Fosca was going to kill her. Mariana becomes obsessed with solving the murders and investigating Fosca. The Maidens has a host of interesting characters and multiple suspects. The Cambridge University setting with its old buildings, makes for a dark, creepy, atmospheric setting. Themes of Greek mythology and tragedy are interspersed and add to the darkness in the story. The ending has a huge twist which I did not predict. The Maidens is a well-written, enjoyable, compulsively readable novel of psychological suspense. @CeladonBooks #TheMaidens #Partner #CeladonReads #BookishFirst
Trustpilot
Copyright © 2022 Thriftbooks.com Terms of Use | Privacy Policy | Do Not Sell or Share My Personal Information | Accessibility Statement
ThriftBooks® and the ThriftBooks® logo are registered trademarks of Thrift Books Global, LLC