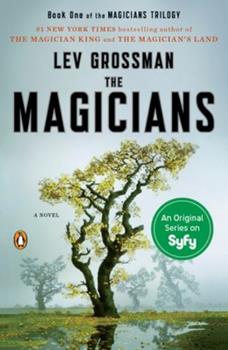 (Book #1 in the The Magicians Series)

The New York Times bestselling novel about a young man practicing magic in the real world, now an original series on SYFY " The Magicians is to Harry Potter as a shot of Irish whiskey is to a glass of weak tea. . . . Hogwarts was never like this." --George R.R. Martin "Sad, hilarious, beautiful, and essential to anyone who cares about modern fantasy." --Joe Hill "A very knowing and wonderful take on the wizard school genre." --John Green " The Magicians...

Published by SusieQ , 7 months ago
I watched this on Netflix and loved it but as usual the book has so much more to offer.

Published by Paul Aaron , 11 months ago
I am an avid reader. In the last 35 years I have finished every book I've started except three. This is one of the three. I forced myself to read over half of the book before throwing in the towel. It's just plain boring.

An entertaining deconstruction of genre tropes

Published by Thriftbooks.com User , 12 years ago
Much fuss has been made about The Magicians, the first foray into the Fantasy genre by Lev Grossman, uber-geek, author of Codex and Senior Writer for Time magazine. The most ironic of all? The book is not being marketed as a genre novel, but rather being shelved in the Literature section at most bookstores, despite being a Fantasy novel (full of every cliché in the book) through and through. The thing is, though, The Magicians is a good crossover novel, bridging the gap between Literature-with-a-capital-L and Fantasy, by taking the usual tropes (magic school, dysfunctional band of misfits, wizards, `You're a wizard, Harry'-moments, fireballs, etc...) and throwing in all that stuff the literary folk like (sex, moral ambiguity, cocaine and whiskey, cancerous relationships, etc...). The Magicians is like Harry Potter meets The Graduate, with a little bit of Trainspotting thrown in for good measure. Of course, general debauchery and acidic characters aren't a magical fix-all, able to turn any Fantasy novel into a work of literary genius; but Grossman is aware of this and uses these uncomfortable literary devices as an avenue to tell a sometimes funny, sometimes painful story of young people growing up in a world they hardly understand. Like Trainspotting, The Magicians is all about Quentin's inability to cope with the trials and travails of real life, and his constant search for Fillory, a magical world that Quentin knows will solve all his problems. As most of us know, though, finding that place rarely solves anything, rather it's often a slippery slope, leading to bigger and more serious problems. Like anyone dealing with the pains of growing up, of having distant, ambivalent parents and friends whose true intentions are often muddy, Quentin is full of his own shortcomings and dichotomies. He's a brilliant, troubled man, searching as much for himself as anything else, and makes some bad decisions throughout the course of the novel. Midway throught the novel, Quentin is let loose into the world with little direction, near limitless access to money and drugs, and all his relationships falling to pieces around him. This period of the novel was difficult to read, as Quentin becomes unlikable and brash and confused, deserving little sympathy from the reader. Like reading The Chronicles of Thomas Covenant, the Unbeliever, the reader often wonders why they should even bother reading on, if there are any redeeming qualities left in Quentin. Like Donaldson, though, Grossman is very deliberate in this emotional breakdown of his protagonist, and it plays an important role in Quentin finding the motivation he needs to remove himself from the downward spiral. When Quentin is finally introduced to the land of Fillory, much later in the novel than expected, it's as much a breath of fresh air for the reader as it is for Quentin and his friends. Desperate for a change, for a purpose in his life, Quentin embraces this newfound adventure and jumps in head first,

Published by Thriftbooks.com User , 13 years ago
Quentin Coldwater is delighted to find out he's one of the chosen few who will train as magicians at Brakebills college. No more mundane high school for him. Things advance at a rapid pace, and pretty soon he and his clique have all graduated and got bored. Then they discover Quentin's childhood passion, the Narnia-like land of Fillory, is real. Quentin knows he's messed up, but being in Fillory will make it all better... won't it? I'd read a few reviews before I came to read this, so I wasn't expecting heart-warming heroics, but I was rather worried the characters would be so unlikeable as to make it very grim. In fact I found it highly readable and enjoyable. Although the overall line is pretty bleak, it's chock-full of fun ideas and it's slyly funny too. Grossman sets out to satirise our preoccupation with escaping to fantasy worlds. This is fantasy as it might be if the people were real, fallible human beings - drawn from the ranks of self-pitying teenagers who will try anything to avoid growing up. We get a Narnia with no religious belief and a Generation X sense of futility, and a Hogwarts stuffed full of over-achieving, angst-ridden egotists. Thankfully, we don't get anywhere near Martin Amis' level of misanthropy. The plot is fast-paced and witty, satisfyingly demolishing some of the pomp of high fantasy. Quentin is a naive idiot, but he's also real enough to identify with, and moping about is kept to a minimum because of all the action. He falls in with Eliot, the Sebastian Flyte of Brakebills, and studious genius Alice. Then there's Penny the punk maverick and lots of other bit parts. Our adventurers earnestly believe themselves to be the good guys. When things fall apart, it's through ordinary human mistakes, not fatal moral flaws. To really enjoy this I think you probably need to be familiar with the Narnia books, Harry Potter and Tolkien - and you probably need to be older than Grossman's characters too. It's a book for fantasy fans that have grown up.

Published by Thriftbooks.com User , 13 years ago
I've read enough books full of wands and spells and mystical lands to have internalized the following rules: magic is fairly simple, sex is largely absent, and the visceral confusion of battle is typically glossed over. Not so in THE MAGICIANS. Spells are akin to high-level physics equations, young wizards have sloppy, drunken feelings for each other, and magical encounters are simultaneously joyous and mind-blowing in their effects. Magic is hard and dangerous and it has very real consequences. So, yes, as many other reviewers have noted, this is a fantasy novel for adults, both in love with and critical of all of its predecessors (C.S. Lewis, J.K. Rowling, even Dungeons and Dragons). But it's also imaginative as hell. There are concepts, characters, and settings (such as an endless Spanish-style plaza, reminiscent of Dali's freakiest paintings, full of fountains that serve as entryways to other worlds) that are themselves deserving of entire books. THE MAGICIANS contains worlds within worlds, and it's wonderfully easy to get lost (and lost, and lost) inside its pages.

The Magicians Mentions in Our Blog

30 Books Your Family Can Enjoy Together This Thanksreading
Published by Beth Clark • November 07, 2018
Between Movember, Thanksgiving, Black Friday, and a cornucopia of other observances and celebrations, November is busy. Which makes causes like Family Literacy Month tempting to skim or even skip. Enter Thanksreading, invented as a way to connect the random dots and promote our favorite thing ever (ahem, besides our stellar customers), BOOKS! Big, small, square, and tall…we have them all. Below are 30 titles handpicked with love for newborns to centenarians, and everyone in between, because families that read together succeed together, and holidays are all about hanging with the ones you love. (And about food—so much food—but that's a separate blog.)
Read Article
Trustpilot
Copyright © 2022 Thriftbooks.com Terms of Use | Privacy Policy | Do Not Sell My Personal Information | Cookie Preferences | Accessibility Statement
ThriftBooks® and the ThriftBooks® logo are registered trademarks of Thrift Books Global, LLC