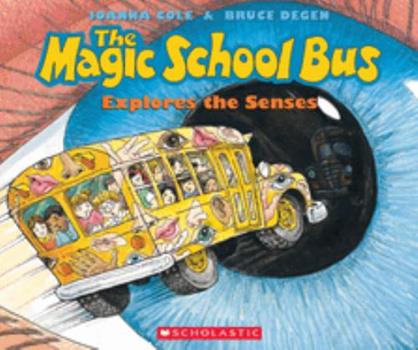 (Book #10 in the The Magic School Bus Series)

To celebrate its 20th anniversary, Scholastic is re-releasing the ten original Magic School Bus titles in paperback. With updated scientific information, the bestselling science series ever is back On a most sense-sational trip that takes them through an eye, an ear, a tongue, and even a dog's nose, Ms. Frizzle's class learns about the senses. Using their trademark sense of humor, Joanna Cole and Bruce Degen provide facts about the senses in both...

finally, it's OK to be serious and science-geeky!

Published by Thriftbooks.com User , 12 years ago
This is a great, almost un American book in that kids are told that it's OK, even wonderful and wondrous to be science geeks, be curious. Love the Frizz when she says "take chances, get messy, make mistakes," and encourages her students to explore. In a society that elevates sports and violence for boys, and beauty and cattiness for girls, this series stands out for encouraging gender neutral intellectualism and academic achievement. My geeky 5 year old can't get enough, having finally found fictional characters that reflect her and encourage her. Factual substance-wise, I as a 40 year old have learned tons.

Talking to preschoolers about science

Published by Thriftbooks.com User , 13 years ago
I work with children aged 2-6 and when I am trying to get an idea of what level of information they will be comfortable with I always turn to Magic School Bus. The kids love the pictures and the Frizz. This book in particular is useful for the next 5 units we'll be teaching.

Published by Thriftbooks.com User , 13 years ago
We read this as a reader but would be equally as good as a health or science book. My 8-year-old son really enjoys these books even though he does not care for the show. In this one the kids explore the 5 senses by shrinking the bus and entering several individuals to experience and discover. Of course there is an explanation of what is true and which part is fiction at the end. Recommended for ages 6-9 years and written on a [...] reading level.

Published by Thriftbooks.com User , 16 years ago
In 1986, author Joanna Cole and illustrator Bruce Degen published their first book together. It was a story about a funky-cool teacher with frizzy-red hair, who led her class on the most extraordinary, in-depth, and out-of-this-world field trips like no instructor before her. The adventures of Ms. Frizzle and her students quickly became a hit with real-life children, parents and teachers alike. No one could have predicted the success that awaited Cole and Degen once "The Magic School Bus: At the Waterworks" hit the shelves. Thirteen years and ten collaborations later, Cole and Degen wrote the final chapter to their long-running series. Appearing in 1999, "The Magic School Bus: Explores the Senses" was a bittersweet end to arguably one of the best ideas in the history of children's literature. The tale begins, like all those before it, inside the Friz's classroom. Her students are learning all about the five senses: seeing, hearing, feeling, tasting, and smelling. Notes one student, "We were even learning a song about the senses to sing at an important parent-teacher meeting." There's a problem with this, however. Ms. Frizzle thinks the conference is tomorrow evening. But little does she know that for once in her life, she's wrong! Incredible though it may seem, the meeting between parents and teachers is actually that evening! At least, that's what Mr. Wilde, Walkerville Elementary's new assistant principal, claims. But because Mr. Wilde doesn't find out about this latest development until the end of the school day, he can't inform the Friz -- she's already left the building! "I've got to catch up with Ms. Frizzle!" exclaims Mr. Wilde. And, to the students' surprise, he plops down behind the wheel of their bus. Knowing the kind of trouble a new assistant principal is likely to have, the students also climb aboard. It marks the first time anyone other than the Friz has driven the bus, and there's no telling what might happen! As with every adventure in the "Magic School Bus" series, things get a little crazy in a very short amount of time. Mr. Wilde, in all his enthusiasm, fiddles with a switch he shouldn't touch and -- PRESTO! -- the bus shrinks until it's no bigger than a speck of dust. Despite being in a rather sticky situation, all is not lost. Instead of fretting over the fix they're in, Mr. Wilde and the students decide to make the best of it. In fact, they turn the experience into a learning session, centered on all things about the five senses. This would include the different parts and functions of seeing, hearing, feeling, tasting, and smelling. Before the adventure is done, Mr. Wilde and the students will have traveled through a police officer, a little boy, Ms. Frizzle herself(!), a dog, and a cat! This book works on a number of levels. One such level, for example, is the symbolism in this final chapter of the series. Even though Ms. Frizzle is not with her students during their inside-story of a field trip,

Published by Thriftbooks.com User , 19 years ago
This book is based on the television show the magic school bus, with Mrs. Frizzle. The book contains great factual illustrations for the reader. The students of Mrs. Frizzle's class are learning about the senses so they get into their magic school bus and shrink down, and go into a students nose and from there they continue to the other sensory organs. I like the format of this book because it is very active instead of reading from a textbook the children can get the same information but have fun while they are learning. I also like hands on activities and this is as close as hands on with a book as you can get. It also gives small science experiments and reports that the class has written for the child to read. The author has such great imagination and brings the fun back into learning science.
Copyright © 2020 Thriftbooks.com Terms of Use | Privacy Policy | Do Not Sell My Personal Information | Accessibility Statement
ThriftBooks® and the ThriftBooks® logo are registered trademarks of Thrift Books Global, LLC