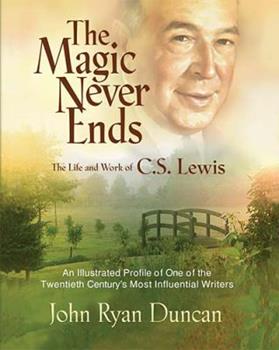 The Magic Never Ends: The Life and Works of C.S. Lewis

Even more than 30 years after his death, C.S. Lewis still remains widely read and extremely popular to both children and adults alike. His writings are imitated, quoted, studied, and revered. With a body of work spanning from science fiction to religious philosophy, he is considered by most scholars to be one of the greatest religious writers of the twentieth century and is often heralded as the "Theologian for Everyman," bringing struggles of faith...

Published by Thriftbooks.com User , 12 years ago
This must be an excellent book because I've purchased it twice!! Anything that includes C.S. Lewis's writings is worth reading at least once. BTW, great seller.

Published by Thriftbooks.com User , 18 years ago
An award-winning director, producer, and screenwriter, John Ryan (Chip) Duncan wrote "The Magic Never Ends" as a companion book to his PBS documentary by the same name (www.duncanentertainment.com). It's the first full-length documentary on C.S. Lewis ever produced in the U.S. and features narration by Sir Ben Kingsley as well as interviews with the various people quoted in this beautiful volume. Duncan has the unique gift of allowing the people he interviews to speak for themselves and then finding the themes or threads that emerge. The book reflects this commitment. It also contains rare photographs of Lewis and his family, as well as more in-depth discussion of the major themes the film explores. A great read and a beautiful coffee-table gift for Lewis fans.

A fanstastic journey into the life of Lewis!

Published by Thriftbooks.com User , 19 years ago
This book, along with Kilby's "C.S. Lewis: Images of His World" and Hooper's "Through joy and Beyond", is essential for those Lewis fans who like to see the actual photos of where is used ot lecture, walk, talk, etc, along with the other key places in his life. With high quality paper and binding, the text is made up in large part by interviews of those who knew Lewis. This is the best book on Lewis to come out in years. Well worth the purchase! Enjoy!

Spiritual Magic-- for Children and Adults!

Published by Thriftbooks.com User , 19 years ago
As a newcomer to the works of C. S. Lewis, I'm thrilled with "The Magic Never Ends". Recently, I've read "A Grief Observed", "The Lion, the Witch, and the Wardrobe", and "The Screwtape Letters", three very diverse examples of Lewis's ability to offer spiritual magic to all age groups. John R. Duncan said it best in his introduction: "The greatness of C. S. Lewis's writing comes from his ability to simplify an intellectual or philosophical concept and to assist readers on a spiritual journey of their own." With input from other Lewis scholars, Douglas Gresham, Walter Hooper, Dr. Dabney Hart, Dr. Lyle Dorsett, Dr. Christopher W. Mitchell, and Colin Manlove,"The Magic Never Ends" provides a "rainbow overview" of one of the 20th Century's most influential writers, C. S. Lewis.

It really is magic!

Published by Thriftbooks.com User , 21 years ago
This book is magical. I have been reading C.S. Lewis for quite a few years now. The authors have captured something of why Lewis' books have never gone out of print. The chapter title "The True Myth" alone is more than worth the price of the book.
Trustpilot
Copyright © 2022 Thriftbooks.com Terms of Use | Privacy Policy | Do Not Sell My Personal Information | Cookie Preferences | Accessibility Statement
ThriftBooks® and the ThriftBooks® logo are registered trademarks of Thrift Books Global, LLC