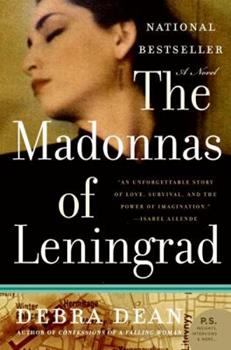 The Madonnas of Leningrad

"An extraordinary debut, a deeply lovely novel that evokes with uncommon deftness the terrible, heartbreaking beauty that is life in wartime. Like the glorious ghosts of the paintings in the Hermitage that lie at the heart of the story, Dean's exquisite prose shimmers with a haunting glow, illuminating us to the notion that art itself is perhaps our most necessary nourishment. A superbly graceful novel." -- Chang-Rae Lee, New York Times Bestselling...

"joy or grief, eventually they are inseparable"

Published by Thriftbooks.com User , 15 years ago
_The Madonnas of Leningrad_ shows us the world through the eyes of a survivor of the seige of Leningrad, both as it was happening to Marina in 1941, and as it was remembered by an 82 year-old Marina suffering from Alzheimer's. It is a heart-breakingly beautiful story, as Dean vividly describes not only the magnificence of the Hermitage (and its artwork), but also the struggles Marina faces as both a young woman and a crone. I was particularly struck by the way Dean allowed me to see through the eyes of a woman with Alzheimer's - what Marina's husband, daughter, or construction workers saw as nonsensical, was, in fact, logical to what was going on in Marina's mind. The ebb and flow between time and place, the gradual loss of ones self, and the child-like wonder of someone suffering from dementia were humanely portrayed. Recommended.

Why isn't this book a Number One Bestseller????

Published by Thriftbooks.com User , 16 years ago
What a magnificent read this was! I am resisting the urge to start reading it again right away only because I have so many on my nightstand that I want to read. But this will be one to be read again sooner than later. I found myself spending so much time looking up the works of art mentioned in the book and the Hermitage Museum website that it took much longer than it should have to read this 228 page book. It is so beautifully written I found myself reading passages over and over again and marking pages with any scrap of paper I had handy. I see it was tied for #1 Booksense pick for April. A pretty good hallmark of an excellent read. This is an amazing story of a woman with Alzheimer's disease, so many times described as "the long goodbye" and most notable in the following passage, "She is leaving him, not all at once, which would be painful enough, but in a wrenching succession of separations. One moment she is here, and then she is gone again, and each journey takes her a little farther from his reach. He cannot follow her, and he wonders where she goes when she leaves." The only thing a bit off-putting was the naming of an island in the San Juans "Drake" island when there is no such island (when the author uses so many other real places) but I believe it was actually San Juan Island where I have visited many times, most recently last August. That is such a small quibble. This is such an outstanding book. I only regret I can't afford to buy one to give to everyone I know.

Published by Thriftbooks.com User , 16 years ago
Debra Dean's debut novel, The Madonnas of Leningrad, is exquisite. Marina is a docent for the Leningrad's famed Heritage Museum. No one but its director is doing any planning in case the German bombs start falling. He has already numbered all the artwork and assembled packing materials. As the Germans mover closer and closer, Marina and her fellow workers begin to dismantle the artworks. The only thing they leave behind are the painting's frames--representing victory for the Allied Army. As war creeps closer, Marina and her family, along with the remaining staff and their families, move into the museum to escape the impending siege and the harshest winter in memory. It is during the packing that one of the babushkas encourages Marina to construct her own "memory palace"--a place where she can retreat when the hard times get harder. This isn't difficult as Marina knows which painting is located in which room and hung in which frame on which wall. Ironically, sixty plus years later in modern America, Marina is losing her memory, falling victim to Alzheimer's. She and her husband Dmitri, who somehow miraculously survived the war, are heading to their granddaughter's wedding. Marina barely remembers she has children, much less grown grandchildren, and that she lives in America. Memories kept her alive and now a memory-eating disease is taking her away. Dean paints vivid pictures of the cold, the fright, the hunger of WWII Russian and juxtaposes them against a cold, frightening illness. The writing is as crisp as the cold air that whips through the Heritage's blown-out skylights. The setting moves so easily between 1941 and present time that I feel I am experiencing Marina's illness with her. Near the novel's end, Marina takes a group of young soldier boys on a tour. As she leads them through the dirty, dark, empty building, the great works of art, in their rich, vibrant colors, are once again on display--and this reader was in awe. I loved it! Armchair Interviews says: Anyone who loved Jonathan Hull's Losing Julia will find The Madonnas of Leningrad as beautiful and enriching.

A poignant novel about beauty and suffering

Published by Thriftbooks.com User , 16 years ago
Your reviewer was in Washington, D.C. this week, but regrettably not long enough to go to the superb National Gallery of Art. The National Gallery, on the Mall between the Capitol and the White House, is special for a lot of reasons, but one of them is that the paintings there are the property of the country, of each individual American, for all of us to enjoy. But even so, there are times when you wander back through a hall where you've been already or observe paintings you've seen and enjoyed, and you feel they've lost something --- the image is more familiar than it was, and perhaps not as special. And as you leave, you might wonder about the people who work there, who see the art everyday, and what they feel about it. Debra Dean's luminous debut novel is about a museum docent in the Hermitage Museum in Leningrad on the eve of the German invasion of the Soviet Union. Her heroine, Marina, leads tours through a legendary collection of great art --- a collection she is thrilled to discover is her own as a Soviet citizen. (She later learns that the Hermitage collection is Stalin's personal slush fund, of course, but that does little to diminish the beauty.) Dean frequently interrupts her narrative to allow Marina to do some first-person storytelling about the art she sees, and it's some of the best writing in the novel. When the war reaches Leningrad, Marina stays at the museum to help evacuate the paintings and other precious works of art, which are sent far beyond the lines for safekeeping. But Marina's own precious love, Dmitri, is sent in the other direction, to the front lines to halt the Nazi advance. Left behind in the city, Marina prowls the empty halls of the Hermitage, trying to reconstruct in her mind the past glories amidst the horrible privations of the besieged city. This is the stuff of great stories, and Dean tells this part of the tale superbly well, reminding an inattentive public of the suffering endured by ordinary Russians in the Second World War. THE MADONNAS OF LENINGRAD, though, is very much a tale of our time as well, with past and present interchanging and intersecting with rapidity. In our time, Marina is old and beginning to lose her faculties, and words like "Alzheimer's" and "assisted living" are being tossed about. When we see her as an elderly woman, she is leaving her comfortable Seattle home to go somewhere; she has to be reminded that it is to the wedding of her granddaughter, to a young man she does not recognize at all. The stories are interlayered so that the reader is led to recognize --- slowly, at first, and then unmistakably --- that the past devastation of the Hermitage is paralleled in the slow collapse of Marina's own "memory palace." The evocation of Marina's suffering is best seen through her own eyes, through her own confused and conflicting recollections. It is all too often seen through the eyes of her daughter, a struggling middle-aged Phoenix artist whose mundane stresses contrast unfavorabl

Published by Thriftbooks.com User , 16 years ago
As a young woman, Marina worked as a museum guide at the Hermitage in Leningrad. When war broke out and the Germans invaded the city, Marina and her comrades were tasked with removing the museum's priceless treasures and storing them safely away. During the 900 days of siege, the city residents faced devastation, starvation, and cold. The Hermitage's basement became Marina's refuge. The empty picture frames gracing its exhibition halls contained echoes of its former art, providing a distraction that helped Marina survive the horrors of war. Now living in Seattle, Marina is an elderly woman who is sinking into dementia. About to attend her granddaughter's wedding, her past overtakes the present and she is living in a muddled world of war, beauty, and the struggle for survival. "The Madonnas of Leningrad" is a beautifully written and richly layered debut novel. Author Debra Dean achieves the daunting task of juxtaposing the horrors of war with the timeless beauty of art. She seamlessly interweaves Marina's flashbacks with present-day family activities. The descriptions of the deteriorating living conditions and the slow erosion of hope turning to despair are so realistic that the reader is transported to the besieged city to suffer along with its residents. There are touching scenes of grown children struggling to cope with the infirmities of their aging parents. This is also a story of love between Marina and Dmitri; it's a love that spans the years, from their youthful separation during the war to their golden years, when Dmitri must cope with Marina's declining mental faculties. There is even a touch of humor here and there too, such as when Marina reflects on the official Communist Party verbiage used to describe the bourgeois society depicted in the art masterpieces. With such a wide variety of themes and imagery here, all expertly crafted into a modest-sized story, this book is a must-read. Eileen Rieback
Trustpilot
Copyright © 2022 Thriftbooks.com Terms of Use | Privacy Policy | Do Not Sell My Personal Information | Cookie Preferences | Accessibility Statement
ThriftBooks® and the ThriftBooks® logo are registered trademarks of Thrift Books Global, LLC