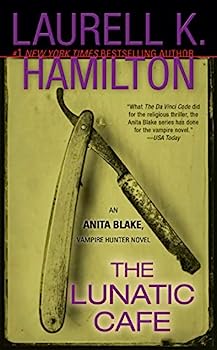 Anita has fallen for the leader of a local pack of werewolves. She's survived a lot, but this love thing may kill her yet. This description may be from another edition of this product.

This is really helping me on my inner teen healing journey.

Published by Sarah , 2 months ago
I know this is more an adult book, and some of the themes and scenes in this book (and book series) are graphic. However, I’m having a great time reading. The ending of this book feels like a fan fiction ending, but I do not say that as an insult. I think this book takes it self seriously but not too seriously. I do recommend these books, and while a lot of the language and themes of this book are kinda problematic, rest assured that Hamilton has turned over a new leaf. Anita Blake is one of those protagonists that I didn’t care for right away, but she is growing on me. Also we love to see Edward. I think he should be apart of KMFDM

Published by Jaime , 2 months ago
This was a good read. It didn't start to capture me until the end. I am enjoying how this love triangle is unfolding and look forward to reading book 5. I love the fact that in each book that I read Laurell has a way of telling you who the murderer is without telling you and keeping you in suspense until the very end. I still love reading this series.

Published by Carissa42977 , 2 years ago
This is the 4th book in the Anita Blake series. I thought it was okay, the first 3 books were better for me than this one. I'm hoping the next book picks up again like the first 3.

Published by Thriftbooks.com User , 18 years ago
I havnet read the series, my friends recommended "The Lunatic Cafe" to me so i started reading and i LOVED it! It's face paced, intriguing and a great read! This may be the best book I've read in a long time! I cant wait to read more by Laurell K. Hamilton in the Anita Blake: Vampire Hunter Novels and her other works! :)

A Bit of the HAir of the Wolf that Bit You

Published by Thriftbooks.com User , 20 years ago
Life is tough when you are the best animator and registered vampire killer in the St. Louis area. For one thing, the police keep calling you in the middle of the night. When Anita Blake settles in for a big date with werewolf Richard Zeeman, the interruptions are non-stop. The first is from Jean-Claude, the jealous vampire Master of the City. In the middle of dealing with the enraged undead, Anita is saved by the pager when she gets her second interruption. She's wanted at the site of a suspected preternatural attack to help the police investigation. What Anita finds at the crime site is no better than what she left at the theater. The evidence she finds points to a rogue lycanthrope - mean, nasty and very hungry. Heading home she is interrupted again. This time it's Marcus and Raina, leaders of Richard Zeeman's wolf pack. They and the leaders of every other family of lycanthropes in the St. Louis area as well. She is hardly sympathetic when they explain that someone is stalking the weres of the city. Eight shapeshifters have disappeared. Concerned about Richard's own safety, Anita undertakes the investigation. Done yet? Nope. Back at her apartment Anita finds that her buddy Edward the bounty hunter is back in town. His assignment this time is to track down the makers of a snuff film. A particularly gruesome snuff film that starts a werewolf, a were leopard and a very short-lived human. With badness going on in every direction Anita must find the solution to all these crimes before she, Richard, and many innocents become victims as well.Aficionados will recognized the usual intricate Hamilton plot. What they will not be prepared for are the complexities introduced by her love for Richard Zeeman. Forced to deal with Richard's own nature she must realizes she must find he own definition of what is monster and what is not. This new twist adds considerable depth to a complex tale.How Laurell Hamilton manages to pick up all these threads, tie them together, and rush headlong to a pulse-stopping conclusion is something that must be read to be enjoyed. Once again Hamilton pushes at the boundary of the typical girl meets monster story to create something that is the best of horror and romance. Readers will be delighted, as usual.

Published by Thriftbooks.com User , 21 years ago
No more marks should equal no more powers, right? Sure, whatever. But alas, Anita is getting stronger, much more so than anyone realizes. The fourth book in the series is more of a soap box love triangle thing than about the gore and raising zombies. After the bloodiness and violence of the 3rd book, it's a nice change, which came at a perfect time. Although Anita gets really beat up in this book and there is violence and death, the usual. Oh, yeah... Finally, for the second time, Anita Blake-tough as nails Animator a.k.a. The Executioner-has found love. Really, she has. We all know him as Richard Zeeman a.k.a. jr. high teacher; a.k.a. werewolf and second in line for the pack. Who could resist an idealistic-at times really annoying, strong, dark handsome werewolf? Anita sure can't, she can't get enough of him. Hmmm, yeah. Of course Jean-Claude is duly pissed and there is some...tension...between the two. By some occurrence, the current pack's leader Marcus, whom Richard is fighting for leadership, offers Richard's services to Jean-Claude. Since the wolf is Jean-Claude's animal-each master vampire has power to call their own animal like Oliver had with snakes-he can also control werewolves as well. Basically, Richard is supposed to do what the Master of the City wants. I emphasize supposed to. Of course, that doesn't happen. A lot of anger and jealousy happen' here. To add to the chaos of confusion, Marcus, the leader of the wolf pack and Raina, the alpha female wolf wants, needs Anita's help in finding out who is killing lycanthropes, werewolves specifically. In the past weeks, 8 werewolves have disappeared or ended up in violent death. With help from Edward and some reluctance help from Richard, Anita plunges forth. Mind you, there is one part of the story line dealing with porno/snuff film. That's Edward's reason for being, he's been hired to kill the lycanthropes involved in the killing of a human girl in a film. It's not crude, it's just frankly stated. While not necessary, it does reveal a little part of Richard's character, which is really important in the story. The sacrifice? Her new relationship with Richard as well as Jean-Claude. As Anita learns more and more about the world of werewolves, she rethinks Richard's proposal of marriage. Yeah, he asked her to marry him. Jean-Claude of course is very pissed and threatens to kill Richard but Anita complies with his terms of dating BOTH of them at the same time, he may let Richard live. Oh, yeah, it gets really interesting. It's the only reason I like Richard; you'll enjoy what Richard brings to the story if your a Jean-Claude fan. It's interesting how Hamilton is able to only give small bits of information and yet maintain such intense interest. You really don't know Jean-Claude or Anita, but each gives a small glimpse of who they are and what they are, what they believe. Great writing at its best. Great sci-fi fantasy with elements of moral, et

Published by Thriftbooks.com User , 21 years ago
In this fourth Anita Blake novel our heroine no longer bears the marks of Jean-Claude or any other master vampire and is exploring a relationship with Richard, the middle school teacher. Of course there are problems: Richard is a werewolf whose pack leader is threatening to kill him, Jean-Claude will not take "no" for an answer and has a female vampire who wants to kill Anita, and Dolph wants help identifying the something that is killing lycanthropes (shapeshifters). "The Lunatic Cafe" is the name of the hangout where the werefolk meet and Anita is finding out more about their kind than she really wants to know. Good thing they want her help in finding out who is butchering their kind, although her involvement is certainly a mixed blessing. As always with Laurell K. Hamilton's Anita Blake novels, she managed to bring everything together by the end of the story. With each book in the series I become more convinced that the "Vampire Hunter" label is to attract fans of Buffy, but Anita is really an Animator (she was a Vampire Hunter in the time BEFORE the first novel) and these books are considerably more gruesome. One of the subplots in "The Lunatic Cafe" concerns a pornographic/snuff film with werewolves and a human girl, with Edward showing up to avenge her death. These are very intense horror novels and Buffy wannabees picking these up without having a clue as to what awaits them inside are not going to sleep for a week. Hamilton has created an alternative reality where monsters have legal rights, and she explores this world with creativity and intelligence. Her heroine endures a lot of physical damage in these books and the mysteries she investigates are always complex. This is a first rate hooror series that deserves its reputation and its growing following.

Published by Thriftbooks.com User , 22 years ago
Normally, I can't stand this genre; instead of something new, the cliches are just tossed together in a hash. But Laurell K. Hamilton keeps me coming back.Part of it is the ongoing plot threads that go from book to book. Although these novels can stand alone, there are larger threads. Anita Blake's "romance" with Jean-Claude, the master vampire, for example, or the hints that Anita is something much stronger (and dangerous) than she or anyone else knows.Another part is Anita. She isn't just a hard rock, lacking any humanity; she's really truly affected by the blood and death she's constantly surrounded by. She doesn't casually walk up to corpses, she has to compose herself before she looks. She's not callous, she's just able to hide her horror, fear and sadness better than most people. We only know because we're in her head."The Lunatic Cafe" is where the series, in my opinion, REALLY starts to pick up (read the other books "Guilty Pleasures", "The Laughing Corpse", and "Circus Of The Damned" first, it WILL help.) The soap opera kicks into high gear with a rather twisted little love triangle, not to mention some unfinished business between Anita and a vamp named Gretchen. Plus we get more of an introduction to the lycanthropes (werebeasts) of the city, their social structure, and the whole host of problems that go with THAT.The novel itself is also pretty good, with the mystery at its center rather clever. Although she doesn't really play fair (we're not given much in the way of clues to possibly solve this mystery on our own), Hamilton does have a satisfactory solution. Like the other books so far, it's got a lightning-fast pace; poor Anita NEVER gets any sleep, something always happens to her.This is, in the end, fun junk, great for airports, beaches, and the living room. They aren't classics, although they'd make great action movies, but the Anita Blake series is worth an occassional $7 now and again.
Trustpilot
Copyright © 2022 Thriftbooks.com Terms of Use | Privacy Policy | Do Not Sell My Personal Information | Cookie Preferences | Accessibility Statement
ThriftBooks® and the ThriftBooks® logo are registered trademarks of Thrift Books Global, LLC