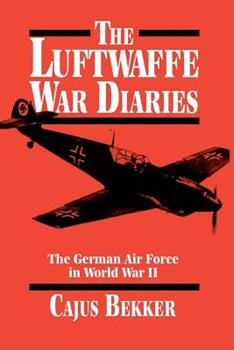 "A gripping, highly contentious account of the rise and fall of the German air force."-- London Times The Luftwaffe War Diaries is the definitive history of the German air force in World War II, from the blitzkrieg on Poland to the last desperate stand over Germany--the only account ever to come from a German source. Its masterfully organized chapters detail, summarize, and evaluate every important strategy and campaign. Cajus Bekker has drawn on...

Published by Thriftbooks.com User , 14 years ago
Although various Luftwaffe campaigns are discussed in this book, I limit my review to the German blitzkrieg against Poland in 1939. This review is based on the original (1968) edition. What has found its way into innumerable books and encyclopedias is a canard. Bekker comments: "Despite all assertions to the contrary, the Polish Air Force was not destroyed on the ground in the first two days of fighting. The bomber brigade in particular continued to make determined attacks on the German forces up to September 16th. However, the Polish aircraft, inferior both in numbers and in design, could hardly contest the supremacy of the Luftwaffe in the air." (p. 59). The Polish aircraft had previously been scattered to secret airfields and camouflaged (there are photos--not in this book--of the planes covered with sod or branches). So what did the Luftwaffe's first-day hoped-for knockout blow against the Polish Air Force actually accomplish? Not much, according to a secret report cited by Bekker: "All the aircraft destroyed on the ground were old training machines...As for the attacks on the aircraft industry, they had done more harm than good, for now the Germans could not use it themselves. The report, of course, remained top secret. The public was kept in complete ignorance. They were told only of the non-stop bombing raids, the peerless power of the Luftwaffe, and above all the morale-shattering effect of the dive bomber." (p. 38) Despite the extreme asymmetry favoring the Germans (using modern terms), the conquest of Poland was no cakewalk. Bekker continues: "The `lightning campaign' against Poland was no easy undertaking. The Poles put up stubborn resistance, and although the campaign lasted only four weeks in all [actually five--not counting subsequent large-scale guerilla warfare], the Luftwaffe lost during this time no less than 743 men and 285 aircraft, including 109 bombers and Stukas...(p. 59). An additional 279 German aircraft were damaged enough to be reckoned lost (p. 364). It is sobering to realize that the German enemy had a greater respect for the Polish fighting forces than did the English and American Allies! Although communications had been paralyzed by relentless German bombing (part of the "shock" in the modern phrase "shock and awe"), the Polish Air Force nevertheless managed to deliver some militarily-significant blows against the invading German land forces. Bekker writes: "But now, having overcome its first bewilderment, the Polish bomber brigade also made itself felt. Taking the defenses unawares, the squadrons launched a number of attacks on the spearhead of the German armored forces...The following day the 1st and 4th Panzer Divisions, pushing ahead of the 10th Army suffered heavy losses from the air on reaching Radomsko, and likewise called for help from the Luftwaffe." (p. 37) What if France and England had actually fulfilled their treaty obligations to Poland and attacked western Germany in September 1939? It would ha

It was a good book about the men that flew in the luftwaffe.

Published by Thriftbooks.com User , 23 years ago
the book i personaly thought that it wa svery interesting because these were the men that flew the airplanes just like the allied pilots these pilots didn't cause the holucaust they didn't kill innocent people the should be given some credit for all of there success i mean just a little for they were fighting for the country so were we and i think that these men a special so read this book
Trustpilot
Copyright © 2022 Thriftbooks.com Terms of Use | Privacy Policy | Do Not Sell My Personal Information | Accessibility Statement
ThriftBooks® and the ThriftBooks® logo are registered trademarks of Thrift Books Global, LLC