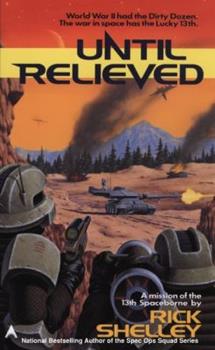 World War II had the Dirty Dozen. The war in space has The Lucky 13th. The 13th Spaceborne is the elite fighting force of the Accord of Free Worlds. Their do-or-die mission is to stop two enemy empires from poaching free worlds. As usual, they're on their own...

Published by Thriftbooks.com User , 17 years ago
Rick Shelley has a very believable way of portraying combat, and he does a very credible job of putting you in the heads of combat soldiers. Better still, he understands Murphy and all the things Murphy can do to an operation.Until Relieved is the first book dealing with the 13th Spaceborn Assault Team (SAT) and it introduces us to the world(s) of the 13th SAT, to its technology, and its soldiers. Shelly has extrapolated the technology of today into a future where anti-grav drives and interstellar navigation are possible, and he comes up with an entirely plausible collection. The weapons effects aren't magical, but are rather functionally a fairly large leap over today's weapons. The difference is one of degree, and the tactics of employing those weapons would be quite familiar to any reasonably modern rifleman from WWII on.Shelly's take on future combat it entirely likely, and he takes realistic note of the logistical difficulties inherent in projecting power across interstellar distances: Even with 'magical' space drives, the energy cost and time involved mean that your best bet is to send a combined arms force with as many supplies as possible, and go reasonably light on your troop numbers. Further, simple, multi-purpose weapons are likely going to be more practical than more lethal but less flexible weapons. Lastly, anything that can reduce casualties, or return casualties to the line, is a real force-multiplier, and should be sent along. Rick Shelley's Accord of Free Worlds understands this, and they equip their SATs properly. So, very few 'Gee-Whiz' weapons, just simple, serviceable, and reliable ones. The one area for which Shelley fails to account is Sensors. Even today, the rapid advances in sensor technology is staggering, and there is no reason to believe that future societies would have allowed this force-multiplying and cost-effective technology to be neglected: Sensors are relatively cheap to buy, take up relatively little space and mass, and make your force massively more effective. Until Relieved was written, however, before this revolution in sensors was readily apparent to the average man-in-the-street, so I'll grant the benefit of the doubt here.That quibble aside, this is an excellent example of the genre of small-unit combat. Rick has come up with the perfect excuse for a unit to be cast on it's own, isolated and without resupply: Interstellar logistics. The Accord of Free Worlds is fighting a defensive action to prevent two warring empires from using its territory as a flank-route around each other. Unfortunately, the Accord was caught flat-footed, and has already lost a number of worlds. They aim to fix that problem, immediately, if not sooner. The "Lucky' 13th SAT has been sent off in a near-suicidal diversionary attack, to draw resources away from the real thrust of the Accord's counter-attack. Interstellar logistics being what they are, a diversionary attack should be even more effective than it would be in today's worl
Copyright © 2020 Thriftbooks.com Terms of Use | Privacy Policy | Do Not Sell My Personal Information | Accessibility Statement
ThriftBooks® and the ThriftBooks® logo are registered trademarks of Thrift Books Global, LLC