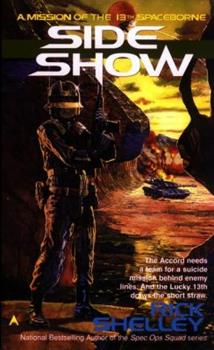 The soldiers of the elite 13th Spaceborne fighting force must locate a secret lab and liberate the scientists held there, before they become prisoners-or casualties-themselves...

Published by Thriftbooks.com User , 17 years ago
Rick Shelley has a very believable way of portraying combat, and he does a very credible job of putting you in the heads of combat veterans. Better still, he understands Murphy and all the things Murphy can do to an operation.Side Show is the second book dealing with the 13th Spaceborn Assault Team (SAT) as it fights another desperate action against the foes of the Accord of Free Worlds. In this case, the Team is part of a larger landing force trying to liberate a world that has been occupied by the enemy for some years. The Accord forces are outnumbered, but have a minor tactical edge in that they don't have to worry about holding down a hostile populace, so they can concentrate their forces. Unfortunately for both sides, the author deals with interstellar logistics in a realistic manner; that is to say, what you land with is what you've got. Period.Faced with a scarcity or resources, and near parity of forces, both sides cautiously maneuver for position, hoping to catch the other at a moment of weakness or disadvantage. The battlefield has become nearly static, with the Accord forces at a slight disadvantage, until word comes from on-high: Send a force to rescue or kill a team of scientists that have been working on a top-secret McGuffin in a hidden lab since before the planet was occupied. Now the 13th SAT must breakout and leave the relative safety of their perimeter behind. Next, they must break contact with the enemy forces, and disguise their direction of march so as not to reveal their objective. Finally, they must rescue the scientists, and either return them to the perimeter of the Accord Forces, or kill them and destroy their work to prevent the enemy from capturing the McGuffin.It's a desperate gamble, and the mission looks like sure suicide, but this isn't the first time the 'Lucky' 13th SAT has been sent out to die, and that's the one thing they're NOT good at doing. Meanwhile, as the 13th is chased by their perplexed foe across the wild countryside, the breakout has stirred a hornet's nest in their wake and the battlefield is static no longer. Each side is trying to turn the other's flank, and a dog-fight for final victory has erupted. Who will emerge from the witches' cauldron at the old perimeter? Will the 13th SAT make their objective on time? Will the McGuffin be as important as it's supposed to be, or is it a forlorn hope? More importantly, what will happen to the individual members of the 13th as they fight and skulk their way across a strange planet on a mission they only partly comprehend?Read it, and find out!The one thing of note here is that Shelly's take on future combat isn't all that unlikely, and he takes realistic note of the logistical difficulties inherent in projecting power across interstellar distances: Even with 'magical' space drives, the energy cost and time involved mean that your best bet is to send a combined arms force with as many supplies as possible, and go reasonably light on your troop numbers. Furt

Published by Thriftbooks.com User , 21 years ago
This, the second book of the Lucky 13th Spaceborne Assault Team (SAT,)pits the characters you were introduced to in the first novel (Until Releived) fighting for their lives once again out on a limb. They are to be detached from the main body and fight the enemy, outnumbered in a side show from the main battle, deceiving and drawing off the enemy to releive pressure on the other two SATs. Once again, the 13th is outnumbered, alone, and fighting to stay alive, not knowing if their mission is ultimately vital to the war effort, or a mere Side Show.
Copyright © 2020 Thriftbooks.com Terms of Use | Privacy Policy | Do Not Sell My Personal Information | Accessibility Statement
ThriftBooks® and the ThriftBooks® logo are registered trademarks of Thrift Books Global, LLC