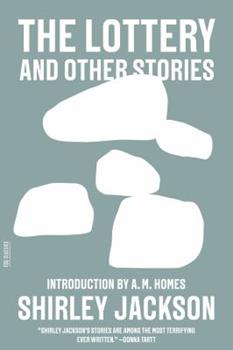 The Lottery and Other Stories

One of the most terrifying stories of the twentieth century, Shirley Jackson s The Lottery created a sensation when it was first published in The New Yorker in 1948. "Power and haunting," and "nights of unrest" were typical reader responses. Today it is considered a classic work of short fiction, a story remarkable for its combination of subtle suspense and pitch-perfect descriptions of both the chilling and the mundane. The Lottery and Other Stories...

Published by Davin , 1 year ago
She has a short story "The Tooth" and gave it a go a few years back, I read the whole story in the Library and was rewarded by temporarily losing my identity while I experienced the entire story in the first person and then my head went numb. Great story.

Published by Thriftbooks.com User , 16 years ago
Many people are familiar with the story "The Lottery," but it is just one of many incredible vignettes of life filling this collection. It is hard to understand today why "The Lottery" originally provoked such a strong reaction, yet it still packs a punch for first-time readers. While it does have aspects of horror, the remaining stories are basically literary. "Flower Garden" and "After You, My Dear Alphonse" deal with racism and would seem to be pretty bold statements for the time period (the book was published in 1948); the latter story seems particularly groundbreaking because of the unusual perspective it provides. "Charles" is a humorous yet illuminating look at the behavior of children, while "Afternoon in Linen" is an important statement on why children sometimes behave as they do. Jackson is at her best when describing the disenchanted adult. The helplessness of women is an important theme in many stories; many of the women described here feel helpless and subservient to their husbands, their neighbors, and their community. "Elizabeth" is a fairly long study of how one woman's wishes and dreams remain unfulfilled in later life. The housewife in "Got a Letter From Jimmy" is thoroughly exasperated by her husband's feelings, and since she cannot speak her mind to him, she is forced to fantasize about killing him. In "The Villager" a woman spontaneously chooses to become someone else entirely for a few minutes, and most of Jackson's heroines spend much time contemplating what could have been. In "Of Course," the fact that a new family has a few unorthodox views builds an unbreachable wall between brand-new neighbors. The women in these stories are always wondering what other people think about them and worrying about what others will say about them. Even when a group of women try to do something good to help the less fortunate, it backfires on them in "Come Dance With Me in Ireland." When a female character vacations with her husband in New York in "Pillar of Salt," she soon becomes "lost," afraid, and desperate to return home. "Colloquy" is the shortest story in the collection, but its protagonist speaks for most of Jackson's female characters when she asks whether she alone or the whole world has gone insane. My favorite story here is "The Daemon Lover." Herein, Jackson offers one of the most poignant, touching looks at loneliness, desperation, and fragility I have ever read. In the story, we spend a day with the protagonist as she prepares for her wedding, having become engaged just the night before to a James Harris. It is a depressing yet beautiful story, and I actually rate it higher than "The Lottery." The character of James Harris actually flitters throughout several of these stories, a phantom of sorts haunting several of Jackson's more memorable female characters. Jackson deals with very serious subjects, and the illumination provided by her unusual perspectives on life is vivid and poignant. When addressing

Buy it for "The Lottery," fall in love with the rest as well

Published by Thriftbooks.com User , 21 years ago
If you've never read "The Lottery," you're wasting valuable time reading this review. Go buy the book and read it instead. If you have read "The Lottery," then odds are you already appreciate this dark, brilliant, horrific little story. It's one of the greatest horror stories ever written, and it's one of my favorites of all time to teach, as well. My students were all shocked and horrified by the story (not least by the fact that I would give them something that so offended them), but by the end of the semester, they came to love the story. The set-up is brilliant, and the twist ending is perfect: brutal, shocking, and short. Other reviewers have commented on the story's excellence for teaching things like the evil of tradition; it's also an excellent way to teach how ordinary people could become involved in something like the Nazi death camps.The rest of the stories in the collection are uniformly excellent, as well, although I would recommend saving "The Lottery" for last. It's by far the most horrific in the collection, but Jackson's satire can be just as brutal as her horror, and there is more than a little of the horror of everyday life sprinkled throughout the rest of these tales. A must-buy!

Published by Thriftbooks.com User , 21 years ago
Despite writing a handful of excellent gothic horror novels, including The Haunting of Hill House (just made into a film for the second time), Shirley Jackson seems destined to be best remembered for her great short story The Lottery. Originally published in The New Yorker in 1948, and a a staple of High School English classes ever since, it elicited some of the most spirited response in the history of that dowdy weekly. The story is a stunning indictment of something but is sufficiently ambiguous that many different individuals and groups were able to take personal offense at its implications. It would seem to me though, that there is a pretty conventional way of reading it; one that both touches upon a basic human truth and offers fairly little offense to anyone. Take it at relative face value and the Lottery represents any human institution which is allowed to continue unchallenged and unconsidered until it becomes a destructive, rather than a constructive, force in men's lives.. After all, in the story, the reasons for holding the Lottery are long forgotten, other than the platitudinous "Lottery in June, corn be heavy soon". And the rituals connected to it, other than the making of participant lists, the use of the old ballot box and the swearing in, have mostly fallen by the wayside. All that really remains is a rigid adherence to a hoary tradition. Now folks can, of course, freight it with specific signifigances--read the whole thing as an attack on capitalism or religion or small town conformity or agrarian culture or any of a number of different things. But it seems to me that the most straightforward reading allows it to impact on all of those things. Simply put, the fact that something has been done a certain way for a really long time does not necessarily justify its continuance. If this powerfully disturbing story seems like too heavy a cudgel to wield to make such a self evident, unnuanced point, let's not underestimate how difficult it is to teach people anything. After all, Plato has maintained the title of world's greatest philosopher for a few thousand years now on the basis of "Know thyself". So, why shouldn't Shirley grab a spot in the limelight for herself with a story that admonishes us to examine our civic rituals, especially since she couched her admonition in a great American gothic horror tale, which still retains its visceral power to shock us. GRADE: A

Published by Thriftbooks.com User , 21 years ago
"The Lottery" is a powerful work of literature and the best short story I ever read. When first published in the "New Yorker" in 1948, it engendered an enormous amount of hate mail; some readers actually canceled their subscriptions. Although now commonly regarded as a masterpiece of short fiction, Jackson's macabre work is still so greatly abhorred by some contemporary readers that they have attempted to get it banned from their local libraries. Indeed, a relacement copy I donatated just quietly disappeared from mine. Why? The few readers I have polled were quick to label the story "terrible" but seemed strangely reluctant to pinpoint their objections; so I can only surmise. I believe the story makes people nervous because they perceive that the community in which the lottery was held is really not all too different from their own. I think Jackson drives home the point that we, too, live in a society rife with superstition and ignorance -- a culture in which ancient traditions are unquestioningly accepted and virtually anyone can suddenly find themselves chosen as a sacrificial offering to an unseen god. When readers see themselves in the role of the ill-fated Mrs. Hutchinson, besieged by a mindless mob of true-believers, they are justifiably terrified. Or could it be that some readers are troubled because they sense in themselves a strong impulse to pick up a stone?

The Lottery and Other Stories Mentions in Our Blog