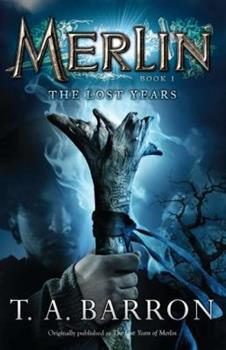 The bestselling series by T. A. Barron Washed up on the shores of ancient Wales, the boy had no home, no memory and no name... he was determined to find all three. This best-selling series follows the adventures and training of young Merlin on the mist-shrouded isle of Fincayra, an enchanted land between earth and sky that is being destroyed by blight. With this land's inhabitants to guide him, the boy will learn that Fincayra's fate and his own quest...

Published by Khalessi , 9 months ago
I just couldn't get into this story. I absolutely love the prose of the story as I'm obsessed with everything Merlin and Arthurian legends! However, the story was poorly plotted. Everything was just going on with no particular route. Things just happened coincidentally. The main character spent more time unconscious then conscious for no apparent reason. Rhia and merlin only knew each other a few days but we are supposed to believe they were life long friends. The ending didn't even make enough sense on who Merlin saves and it doesn't seem to transition into another book.

Published by Thriftbooks.com User , 19 years ago
"Lost Years of Merlin" is one of the few genuinely new pieces of Arthurian fiction out there. Most either retread old ground or try for realism. T.A. Barron does just the opposite, utilizing his sense of magic and knowledge of Celtic mythos for a delightful fantasy/Arthurian book.An amnesiac boy washes up on the shores of Wales, with a golden-haired woman nearby. She says that their names are Branwen and Emrys, but somehow he doesn't believe her. Merlin - with his slightly odd appearance, hermit-like mother, and growing supernatural powers - is an outcast from the village. One day, a group of boys' taunting goes horribly wrong. Merlin and Branwen go to a nearby convent, where he finds that he has lost the use of his eyes. Despite his fear of his powers, his "second sight" asserts itself and allows everyday life.But Merlin isn't content to stay with the nuns, as Branwen seems to be. He goes off on a journey, and on a hunch rafts himself off to sea - and lands again on a foreign shore, that of the mystical isle of Fincayra. This time, however, there are intelligent hawks attacking rats, girls gowned in leaves, and trees that block his path. He lands in the middle of the Druma Wood, where he meets a strange woodland girl named Rhia.Rhia and Merlin encounter trouble (two kinds - the hawk is also called "Trouble") when they find that evil things and a sinister blight are creeping across the River Unceasing - and then a band of goblins try to kidnap Merlin. With the help of a diminuative giant named Shim, Merlin must find use his heart, brain, powers, and the mysterious Galator pendant to defeat the evil Rhita Gawr, find the Seven Treasures, and save Fincayra.Barron's prose is one of the rare kinds that becomes intoxicating when he really gets going. It's fortunate that much of this book takes place outdoors, as his nature descriptions are amazing and the character interactions concerning trees, especially, are delightful. He utilizes Celtic myths and legends - such as the name Branwen and the legendary Dagda - to good effect, as well as he did in "Merlin Effect." Humor is present in the form of Shim the tiny giant (so tiny that he still wears giant baby clothes) but it never becomes annoying.Characterizations? Merlin is entirely believable as an outcast boy afraid of himself, and of what he might become if he allows his powers to run rampant. Rhia is just a little out of sync with him, enough to make it believable that she grew up in the woods. Shim doesn't experience quite the same level of interest, but he's a good supporting character. And characters like Domnu, the Grand Elusa, and Cairpre help round out the story with a bit of realistic weirdness. Even evil characters like Stangmar are more developed than the usual ... dark lords. Perhaps the main flaw of this book is that the pacing feels a bit off, as compared to the next four books. We go at a moderate pace, but after Domnu appears we zip through the rest of it, especially the last twenty page

Published by Thriftbooks.com User , 21 years ago
Many people have heard of the magical and wise Merlin but his childhood is a mystery. "The Lost Years of Merlin", written by T.A Barron, fills in most of the gaps. This enchanting tale is about a young man named Emrys who loses his memory and finds his way to Fincayra, where he searches for his future though many adventures wait for him. Fincayra is a place of wonder and mystery because it contains many good and bad creatures. Along the way he meets many people (or things) who help him find the secrets of Fincayra. T.A Barron did an extremely good job of describing Merlin's dangerous yet magical life. One of the many tings he gets in Fincayra is his new name, Merlin. Kids tend to like books about things they don't usually see or hear about but some kids don't. If so, they would not like "The Lost Years of Merlin" because you don't see a young wizard learning magic in a place called Fincayra and being pursued by another evil wizard. Another reason this book might not be liked is the large variety characters and setting. There is a wide range of new characters in every new book in the series that are fun to read about yet some might become confused. Even so, I don't think any of these reasons is good enough to stop someone from reading this book. Others might like books that move slowly or books that are realistic but if not this book is perfect. One can tell that the author took a long time to think out this book so that it is understandable and simple. I am, myself, a really slow reader but I read this book with ease. It is mostly a calm book. This is one of the best series I have read and I am confident you will think so too.

Published by Thriftbooks.com User , 21 years ago
The book The Lost Years Of Merlin, by T.A. Barron, is the story of a seven year old boy who is thrown onto shore by a storm and, in the process, hits his head resulting in amnesia. A woman named Branwen, who claims to be his mother, takes him in and lives with the boy, Emerys, for six years. During this time, he discovers he has mystical powers. Since Branwen won't explain his past, Emerys finds he must travel to a world named Fincayra, a place Branwen claims to be from, to find out. Emerys sets out on a raft and reaches the coast of Fincayra. Emerys discovers that this land is in grave danger and he may be the only one who can save this world. I would recommend this book to anyone who enjoys adventure, fantasy, mystical powers, and the possiblility of other worlds. You also get the chance to watch a boy's life unfold and discover his past along with the character himsself. It's wonderfully suspenseful as you meet new characters and discover the effect each one has on Emerys, who risks his life every step of the way. It is a very well written book that creates a perfectly woven image of a mystical world.

A definite must - read book and series!

Published by Thriftbooks.com User , 21 years ago
When I scanned through the shelves of my public library about a year and a half ago and picked up an interesting looking story, I had no idea that I had just discovered what would become one of my favorite books and series of all time. I read The Lost Years of Merlin twice on my library rent, and soon bought the rest of the series as it came out. I am now awaiting the 5th and final novel in the excellent series. The book opened my eyes to the fascinating wizard whom I had never thought of as more as the wise and deft wizard with a long beard who tutored King Arthur. I had never thought of the childhood and growing up he must have experienced or struggles he may have overcome. T.A. Barron's epic has put a human face on the great wizard known by so many. Written in an excellent 1st person, it truly puts you in the shoes of the young and not yet formidable wizard. With him you experience barriers, both emotional and physical that he must overcome. The stories are never dull, and Barron weaves them expertly through the pages of his fascinating books. I highly recommend this series to people of all ages, as it will not only entertain, but spark an interest in the famous wizard, not only his accomplishments, but his struggles, and triumphs, great and small.

Published by Thriftbooks.com User , 21 years ago
I extremely hope this review will get posted (a lot of mine haven't). Anyhow, I read this book when it was first released and have since then waited (impatiently I might add) for the next ones. I can't tell which of the 4 is better, as a matter of fact I've only read the 1st 2 (waiting for paperback editions). These are absolutley the BEST books ever written. They by-pass Harry Potter by a long shot. Barron was ingenious to put it in 1st person. But what really got me was the inward as well as outward struggle. When you see Merlin, you think of a powerful wizard which nothing can effect. These books tell that differently and explain a lot of things in his earlier life. THEY ARE THE BEST BOOKS FOR ANYONE OF ANY AGE.....BUY THEM NOW!
Copyright © 2020 Thriftbooks.com Terms of Use | Privacy Policy | Do Not Sell My Personal Information | Accessibility Statement
ThriftBooks® and the ThriftBooks® logo are registered trademarks of Thrift Books Global, LLC