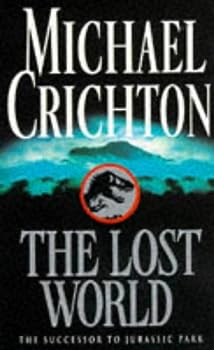 (Book #2 in the Jurassic Park Series)

#1 NEW YORK TIMES BESTSELLER - From the author of Timeline, Sphere, and Congo comes the sequel to the smash-hit Jurassic Park, a thriller that's been millions of years in the making. "Fast and... This description may be from another edition of this product.

Not as good as the first but still worth it

Published by Tanner W , 1 month ago
This book will not live up to the first Jurassic Park it it gives readers another adventure in the age of dinosaurs.

You have to read this!

Published by Lina Olivia Bass , 3 months ago
So incredible! Didn’t think I could love it as much as the first book, but I did! If you’re worried about wasting your time with this book, worry no longer, because this book is worth ever second of your time!!!

Published by Thriftbooks.com User , 3 years ago
It's great to see the world of Jurassic Park expanded on. And it's another tense sutuation of how the characters will survive.

Amazing, A Sequal thats Worth the Time

Published by Thriftbooks.com User , 22 years ago
I'm quite skeptical about sequels, especially when the first was simply so clever. I could never have expected The Lost World to be so much different, and yet every bit as good as its predecessor. Perhaps one my favorite aspects of this book is that Crichton takes a risk (which is quite renowned for now) and offers an entirely new breed of dinosaur toward the end, the Chameleon-Raptor mix. The moment I begin to see this being, I envisioned one of the most devastating beasts the World would have ever known. I wish there had been more dealing with this creature throughout the adventure, but I was pleased to see Crichton back off the complex, realistic style he's so fond of and side track down a more creative, "what if" path. This book is not JP and it doesn't read like JP did, but I consider it worth every dime that JP was.

Published by Thriftbooks.com User , 22 years ago
So far, my favorite book is "The Lost World", despite some of it's obvious flaws. Such would include the large number of inconsistancies between Jurrassic Park and this sequel, and obviously the only reason Crichton wrote this was because Universal wanted a sequel for Jurassic Park, but these are easily forgiven over the quality of the work. As opposed to the first Jurassic Park, Crichton takes much more time in his visual descriptions of the actions in this novel, giving a better sense of the passage of time. One would notice that this book is noticably longer than the first. Crichton, like usual, is a master of educating his readers while entertaining them, better than many writers. Of course, one has to mention the often frightening edge-of-your-seat suspence that makes this novel impossible to put down. If you read this book and find yourself still craving knowledge and dinosaur action, I would suggest the novel "Raptor Red" by Robert T. Bakker. This book is also extreemly informative as well as action-packed, however it does not have the real scary edge of The Lost World or Jurassic Park. On the other hand, it is written from the Raptor's perspective, and is a real interesting twist on normal dino stories.

Published by Thriftbooks.com User , 23 years ago
If you are like me, you loved the intensity of "Jurassic Park." Crichton always manages to keep readers on the edge of their seats with fascinating plots and thought-provoking situations. "The Lost World" is no exception, and revives the intensity of its predecessor. Unfortunately, many people will know this novel only by the travesty that was made of it (speaking here of the movie). If, perhaps, a bit far-fetched in spots (come on, people -- we're talking about cloning dinosaurs here), "The Lost World" nonetheless provides exactly what it claims to offer -- a fast-paced, exciting read. (But wasn't Malcolm dead???)

Published by Thriftbooks.com User , 23 years ago
"The Lost World" (the BOOK, not the movie) lives up to the expectations one would have for Crichton. Read it, keeping in mind that this is a NOVEL people -- so it's a little far-fetched. Perhaps the scientific research isn't entirely sound (would I really know?). But if you're looking for exciting FICTION, which is all this book claims to be, read it. (But wasn't Malcolm dead?)

Published by Thriftbooks.com User , 24 years ago
"The Lost World" is one of the best books I have ever read. Crichton was ingenious while writing it, although I have head that he very much hated it himself, when writing it, until he read it once again. I have read it 5 times and have seen the movie 6. It is one of my favorites along with "Sphere", "Airframe", and several others of his. His characters, such as Ian Malcolm, Sarah Harding, Doc Thorne, and Eddie Carr are very strong, and it seems as if you could actually meet them once you get into the book. The movie was not as good, but much better than "Jurassic Park". The original had much more research dedicated to it, but when Malcolm describes this information, which he does often, he begins to drone, and becomes especially boring. He is not near as boring in the sequel, but, as one other person remarked in their own review, Malcolm was said to be dead by Muldoon, who would have surely known. The others left the island--Isla Nublar--in helicopters, and the island was obliterated with bombs, unless other choppers came to the compound, taking Malcolm's 'dead' body away, and fixing him up. Anyway, "Lost World" is a magnificent book, and I would advise others to read it.
Trustpilot
Copyright © 2022 Thriftbooks.com Terms of Use | Privacy Policy | Do Not Sell or Share My Personal Information | Accessibility Statement
ThriftBooks® and the ThriftBooks® logo are registered trademarks of Thrift Books Global, LLC