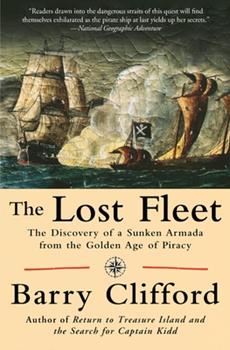 The Lost Fleet: The Discovery of a Sunken Armada from the Golden Age of Piracy

by Kenneth Kinkor and Barry Clifford

On January 2, 1678, a fleet of French ships sank off the Venezuelan coast. This proved disastrous for French naval power in the region, and sparked the rise of a golden age of piracy. Tracing the lives of fabled pirates like the Chevalier de Grammont, Nikolaas Van Hoorn, Thomas Paine, and Jean Comte d'Estrees, The Lost Fleet portrays a dark age, when the outcasts of European society formed a democracy of buccaneers, settling on a string of islands...

Published by Thriftbooks.com User , 14 years ago
In this book you learn a lot about piracy. This crew is dedicated to find a sunken armada in the coast of Venezuela, and through out their own expedition to do so, the author teaches us a lot of pirates on the golden age of bucaneering in the Caribean. They run into all kinds of trouble, from bad weather during their dives, to government obstacles. I had a hard time dealing with Charles Brewer's involvement in the project, as well as his personality and way of thinking. He's way to arrogant and annoying for me. Other than that it's a good book. And if you want to learn more about pirates I strongly recommend - Under the Black Flag: The Romance and the Reality of Life Among the Pirates by David Cordingly.

An entertaining and educational book

Published by Thriftbooks.com User , 14 years ago
I first picked up this book several years ago but just recently got around to reading it. Some books on history can really be dull and seem to drag on and you just want to finish the book to move on to something better. This is not one of those books. From the very first pages, you are given a vivid description of the late 17th century and all the characters involved. Clifford does not go into overwhelming detail like some historians can do in their books but that may be because Clifford is not an academic historian in the sense. Clifford is himself a diver; someone who goes out and finds history and the excitement that he gets when he goes out on an expedition is brought to the pages of this book. Clifford gives a brief background of the Caribbean and the feuding European powers involved in the domination of the New World. It is just enough information for a layman to be brought up to speed but it is also detailed enough for an avid student of history to still learn something. He then intermixes the story of the lost fleet with his own expedition which had it's own problems. Some might find this distracting but I found it interesting. The main premise Clifford makes in the book is that this great destruction of the French fleet in conjunction with the assembling of a great pirate fleet is what sparked the Golden Age of Piracy. Furthermore he asserts that this is what ultimately marked the end of French dominance. I am not well enough versed in history of this specific time period but I do find his assertions interesting and with merit. The book has many pictures of the expedition and prints of the places, people and events described within. I would recommend this book to anyone who loves history, pirates, the Caribbean, or diving.

Published by Thriftbooks.com User , 17 years ago
Barry Clifford has put together an entertaining book that tells two stories linked across 300 years by a maritime disaster that drastically altered the fate of the Caribbean. He interleaves the stories in a successful effort to provide tension and suspense, keeping the reader interested throughout the book.The first story is a narrative of the underwater exploration of the site of the wreck of Jean Comte d'Estrées fleet off Las Aves island. He details the interpersonal relationships and trials of gaining approval to explore the wrecks in foreign waters. While I am not very interested in underwater archeology, Clifford made these segments entertaining and very readable.For my interest, the other thread of the book was the real meat. Barry Clifford provides a detailed history of several of the major figures from the beginning of the Golden Age of Piracy, specifically 1678 to about 1700. He provides a good deal of information on the Chevalier de Grammont, de Graf, Thomas Paine (not the author of Common Sense) and Nikolaas Van Hoorn. Clifford recounts the many sackings of towns, and interactions with local governments, including the changing attitudes as the years wore on.Overall, I found this to be an entertaining and informative read. I may have to look into finding copies of his other books. For more information on piracy in the Caribbean (from the Spanish viewpoint) try Pirates in the Caribbean :1493-1720 by Cruz Apestegui. P-)

Published by Thriftbooks.com User , 18 years ago
Another book by the "archeological privateer" Barry Clifford, the oceanic excavator who found the wreck of Black Sam Bellamy's ship the Whydah in the sands off Cape Cod. His writing has improved since he wrote "Expedition Whydah," though he's still not a master with words. No matter, his subjects are always facinating enough I don't mind that the prose can be a bit clunky. This one traces his team's discovery and exploration (underwritten by Max Kennedy, the BBC, and the Discovery Channel) of a wreck of an entire fleet of ships--5 French warships and two pirate ships the French fleet hired to assist them in warfare--on the reef of Los Aves off the coast of Venezuela. In a similar vein to the Whydah book, Clifford intersperses his text with photographs, maps, and drawings, and alternates the story of his expedition with history about the pirates involved in the wrecks. In this case, he does the opposite of the Whydah story (which traced Sam Bellamy's rise to captainship and followed him until his demise), and instead follows the lives of the documented pirates who *survived* the massive wreck at Los Aves, among them a famous and ridiculously lucky mulatto captain named Laurens de Graff, and a New England pirate named Thomas Paine who later went on to return to his home and established himself as a powerful and corrupt politician (not the same Thomas Paine that wrote the "Common Sense" political publication, this was a few decades earlier). The historical portions of the text offer a lot of great insight into the piratical/buccanneer climate (political, economical, etc) of the mid- to late-17th c. in the Caribbean and Spanish Main.Most interesting is the existance of a period map he brought with him, drawn by the leader of the shipwrecked fleet from shore where he survived the wreckage, outlining the positions of each wreck and labelling them by name--his accuracy was apparently quite high, so it functioned like a literal 'treasure map,' showing the explorers exactly where they would find the wrecks of which ships! There's not as much info on artifacts in this one, since they merely mapped and filmed the wrecks and haven't excavated yet (unknown if they will, in fact, due to most of the wreckage having become an integral part of the ecosystem of the reef by now), but there's a lot of really new discoveries on the research front (pub date on this is 2002) about the various pirates involved, most of whom are lesser known names (as opposed to the more "famous" pirates like Blackbeard and Captain Kidd, who came later...these were the pirates operating on the cusp of the Golden Age of Piracy).So, if you want to read some detailed info about pirate captains of the pre-1700 era, this is a good book to check out!

Two Stories In One Book

Published by Thriftbooks.com User , 19 years ago
Barry Clifford has written an interesting book on a fleet of French ships that were in pursuit of Dutch ships which led the French into the treacherous waters of the reef off of Las Aves Island near the coast of Venezuela in 1678. He states the wreckage of the French fleet on Las Aves was the beginning of some of the greatest pirate careers in history. British and French ships would attack Spanish ships as they returned to Spain after loading up on riches in the New World. Many pirates, Clifford states, met a brutal demise and he goes into detail in regard to a number of pirates to illustrate his point while one in particular, Thomas Paine (not the one of Common Sense fame), managed to retire and lead a somewhat respectable life. Clifford organized a team to visit the site in 1998 and locate the fleet for purposes of drawing and photographing whatever he may find of the remains. He was not interested in disturbing the reef by removing artifacts. Clifford goes into interesting detail on his team's visit to Las Aves as they go about doing their assigned work. Clifford alternates throughout the book covering piracy during the 1600's and his visit to the site during 1998. I took a chance on buying this book through the History Book Club not really knowing what I was getting. I found this book to be very worth while to read and it will have a permanent place in my library.
Copyright © 2022 Thriftbooks.com Terms of Use | Privacy Policy | Do Not Sell My Personal Information | Accessibility Statement
ThriftBooks® and the ThriftBooks® logo are registered trademarks of Thrift Books Global, LLC