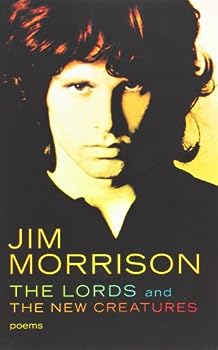 The Lords and the New Creatures

Originally published as two separate volumes in 1969, Jim Morrison's first published volume of poetry gives a revealing glimpse of an era and the man whose songs and savage performances have left an... This description may be from another edition of this product.

Published by Thriftbooks.com User , 17 years ago
The original cover of this book was actually a purplish fabric, no pictures, just plain with the title on the cover and binder. It's also above the heads of some readers. I've read it many times, and still say to myself, "My I've never looked at it like that before." Definately mind expanding. Read it.

THE LORDS. THE NEW CREATURES

Published by Thriftbooks.com User , 19 years ago
The only authorized examples of Morrison's poetry were issued in 1969 as private limited editions of only 100 copies each. Later American editions became essential reading, not only for fans of The Doors but for all with an interest in contemporary American verse. The Lords and The New Creatures are an important appendix to the breathtaking music Jim left behind. Great Poetry book done by a great american poet!Fall down. Strange gods arrive in fast enemy poses. Their shirts are soft marrying cloth and hair together. All along their arms ornaments conceal veins bluer than blood pretending welcome. Soft lizard eyes connect. Their soft drained insect cries erect new fear, where fears reign. The rustling of sex against their skin. The wind withdraws all sound. Stamp your witness on the punished ground. Buy this book! I highly recommend it!

Published by Thriftbooks.com User , 20 years ago
"The Lords and the New Creatures" is a collection of poetry by Jim Morrison, who was lead singer of The Doors. The book is divided into two sections: "The Lords: Notes on Vision," and "The New Creatures." This is one of those intriguing books that I by chance picked off the shelf in a bookstore and just began reading there in the aisle; I found Morrison's work so engrossing that within a few minutes I knew I had to buy the book and explore it more deeply.The first division of the book is dominated by prose poems. This portion of the book is a combination of mystical/philosophical treatise and cultural criticism, often supplemented with historical references; here Morrison sounds like the love child of William Blake and Roland Barthes. The second part of the book consists largely of free verse and is more enigmatic; with its sometimes nightmarish imagery, "The New Creatures" strikes me as Morrison's own personal Book of Revelation.An important theme in this book is the archetypal city: "a ring of death / with sex at its center." Morrison also writes about the alchemist, the voyeur, and other figures. Much of the book deals with the motion picture as both art and cultural institution. Throughout the book are hallucinogenic swirls of cross-cultural references and allusions: Yoga, the assassin Oswald, hermaphroditism, the Christian trinity, Tarot cards, ventriloquism, lynching, etc.In "The Lords and the New Creatures," Morrison seems to be trying to attain a unified vision/theory that encompasses both modern technology and humanity's mythic heritage. His poetic language is often quite startling. This is a remarkable volume by an artist who is himself an iconic figure in 20th century pop culture.

Published by Thriftbooks.com User , 21 years ago
Jim's poetry is a gift to anyone who reads it. Everybody has poetry, but not everyone writes it down or allows others to read it. To be privy to another man's soul is an indescribable experience. If you don't understand the words that doesn't make the poetry "bad", there is no such terminology for art, it transcends all judgement. You may say you don't like it which actually means you don't understand it. You cannot however judge it. That is the odyssey of art and that is also why so many chose to escape into the lawless land of truly free expression. So tap into another man's soul and surround yourself with his words. No laws. No judge. No jurors.

The west is the best, get here and you'll hear the rest.

Published by Thriftbooks.com User , 23 years ago
"Wake-up!"..." Is everybody in, everybody in? The ceremony is about to begin. Let me tell you about surrealism and the lost god."For those who are sincere to themsleves and can dig deep into the soul, you could indeed capture the poetry in which life is all about. Poetry gives life form, most people see poetry as a series of rhyming words. They have got it all wrong. Jim explored the world not as how he would of wanted it to be, but the way this world already is. Some people show ignorance in the disorder that we are sorrounded with, Jim didn't. He was a poet of truth, that's what Jim tells us in this book.
Trustpilot
Copyright © 2022 Thriftbooks.com Terms of Use | Privacy Policy | Do Not Sell My Personal Information | Accessibility Statement
ThriftBooks® and the ThriftBooks® logo are registered trademarks of Thrift Books Global, LLC